Take World of Warships, give it a miniaturised, cartoon makeover with an Overwatch-esque color palette, add an EDM soundtrack, lay off on the IAPs a bit, and you’ve got Battle Bay, Rovio's (you know, the Angry Birds people) latest foray into mobile games. Battle Bay is as fun as it is colourful. You team up with a crew of four other ships to take out your enemies in short multiplayer combat set amongst rolling waves and tropical locales.

Sure, it's not exactly the next big idea in gaming, but it pretty much perfects the strategic multiplayer experience on mobile gadgets. You'll have a hard time putting this one down, folks. 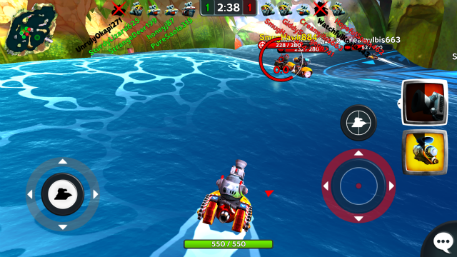 The core concept is pretty simple. You take your little battle boat, equipped with a gun or two, and set out to beat the other team before the five-minute timer is up. You can do this by destroying all of your opponents or capturing a base.

More often than not, battles end when a team is eliminated - combat is so much fun you don't really want to do anything else.

You steer by holding your thumb on the left side of the screen, and shoot with your right. Controls are pretty fluid for the most part, but independently moving the camera while your boat drifts through the water can be disorienting at times.

Each map is filled with floating obstacles that you can use strategically, but the gently rolling waves may just be game's coolest strategic element.

Waves rock your boat with surprising realism. The ocean swells cause your boat to rise in fall, forcing you to time your shots carefully. The waves provide excellent cover, too, when you're stuck in open waters. It's a surprisingly important part of battle.

You sunk my battle ship

While the game is set atop some pretty complex systems, Battle Bay lets new players in with a carefully paced tutorial. Rather than holding your hand too tightly, the tutorial guides you through your first batch of multiplayer matches, sucking you into the action straight away.

Battle rewards are doled out in the form of sugar, pearls, and gold, which you can then use to train your ship captains and improve your weapons.

Rather than earning experience from combat, you level up by training each of your captains. Each has a skill tree that improves different stats. With ten different captains at launch, this leaves a lot of room to build up the skills that suit your play style best.

Weapons, too, can be upgraded, improving their stats. But the real joy is discovering new guns to add to your arsenal from Battle Bay's impressive collection.

You'll find new equipment in crates which you can either buy or win by completing quests. While Battle Bay employs a standard IAP system, I never felt that I was at a disadvantage if I chose not to spend money.

Battle rewards are relatively generous, and the waiting time for hiring new captains will not set you back for impossible stretches of time. 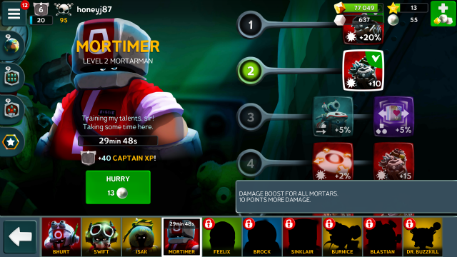 Simply put, Battle Bay is an incredibly well-constructed game. It's a blast from the get-go, pulling you into battle from the very start.

The sheer level of variety in ships, upgrades, and weapons brings something new to every battle, and the competitive element will leave you hooked regardless of skill level or familiarity with the genre.

Battle Bay is the perfect way to kick off the warmer summer months. It's familiar, sure, but its bright and beautiful design and masterfully crafted gameplay will quickly make you forget that you may have played this game before in some other guise.