How to get started with Rovio's nautical shooter

Rovio has launched a brand new game in Battle Bay, and it's been getting a lot of love online.

The Angry Bird dev has pulled out all the stops to put together a slick competitive online experience, but it doesn't quite look or play like much else on the App Store. Not exactly.

All of which might leave beginners a little confused at the outset. Here, then, are some tips to help get you started in Battle Bay. 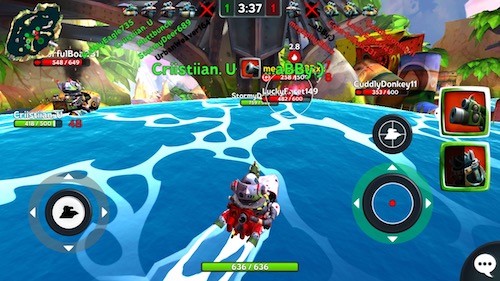 Battle Bay plays a lot like a tank battler but for one vital ingredient - the waves. The battlefield is constantly roiling and shifting in Battle Bay, and it's not just for cosmetic effect.

Many of the most damaging weapons in Battle Bay rely on line of sight to hit home, so if a wave comes up between your boat and your opponent's such weapons become useless.

Try to time your shots when there's a dip in between you and your opponent. If it looks like a wave might interfere, stay your hand. You might not get an opportunity to fire again for a while...

Battle Bay is no button mashing blaster. Even the fastest-firing weapons take several seconds to load up in between shots, while the really damaging ones can take 10 seconds and more.

You need to take more than the usual care that your shots are going to strike home, then. We've already mentioned not wasting shots when a wave is in the way, but by the same logic you should avoid the temptation to shoot when an opponent is about to sail behind cover, or when it's really close and about to pass you heading the other way. 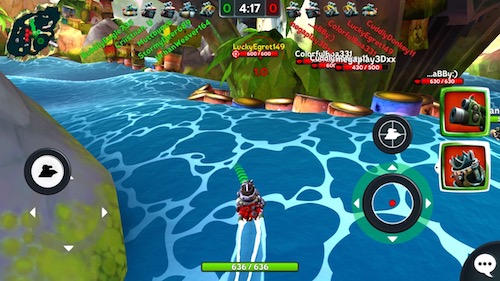 If you want to avoid a direct scrap (handy if your boat isn't particularly well armoured), get yourself a mortar. These guns negate the defensive advantages supplied by waves and cover by firing right over the top.

Take note, though - they're not always the most damaging weapons, and they can be easily avoided by quick and alert enemies. On that latter point, it's often worth aiming manually so that you can lead your target, firing where they're going to be rather than where they were.

Switching things around, if you see a red circle appearing on the waves, steer clear. An enemy is about to launch a mortar attack.

Gang up and fight dirty

Don't think that Battle Bay is a noble game of separate one-on-one duels. Oh no. The best approach is to fight dirty and gang up on a single opponent.

In a similar way, if you have a choice between taking on an opponent with full health and wailing on one that's close to death, pick the latter. At the very least, it's one less gun trained on your team.

Switch away from common weapons ASAP 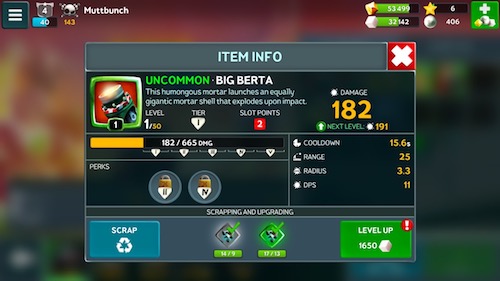 Weapons in Battle Bay are divided into rarity categories, and you start with Common gear. This is the worst stuff around, so don't waste too many of your resources upgrading them. Switch to at least Uncommon gear as quickly as you can (which shouldn't be too long).

You might be tempted to hoard the game's gold currency from the start so that you can afford some of the better gear sooner. Don't. Your gold capacity is limited early on, so don't be afraid to spend. 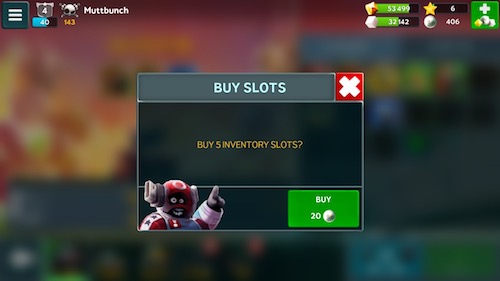 You should, however, hoard items. At the beginning you'll find yourself bombarded with new weapons and equipment - more than you'll know what to do with. These are worth keeping around, either to experiment with or to turn into valuable scrap at a later date.

In order to hoard, you'll need to increase your item slot allotment, which is well worth the outlay.

Remember, too, that any extra boats you buy have their own item slots, so keep these fully tooled up to maximise your available space.

Early on you'll be offered the chance to watch a video to boost your reward after a fight. You should take this opportunity, as you can gain a lot of extra swag, including 20 percent more currency and a bonus pearl.

Next Up :
Lineage2M best class and races explained