Out meow on iOS and Android

Swipe Studios Interactive has released its own twist on the sport of basketball with its new BasCATball Coach mobile game. It is now available for iOS and Android devices.

As you might have guessed from the title, the game is about coaching a team of feline sports players who have signed up for a basketball team. You take control of feline stars such as Stephen Furry, LeBron Mames, and Giannis Antetocatbones to guide them to the playoffs and win glory. 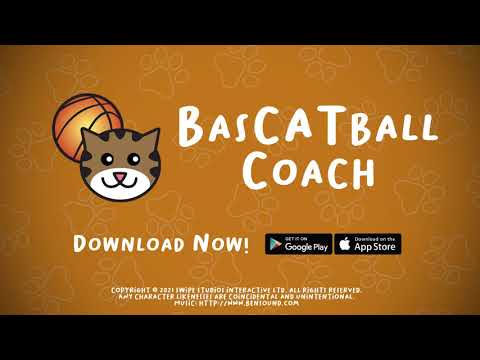 You select your team from a bunch of familiar names such as Mew York, Pawtland, Catlanta, and Detrout, and then coach the team of highly paid kittens to find success on the court. If the team isn’t up to scratch, you can always trade the players to build up the best all-star team cat basketball history.

BasCATball Coach has simple menus that allow you to focus on picking the perfect team, but cats, as well know, can get cranky if they don’t have their naps so it’s important to keep your line up fresh by maintaining their energy levels whenever possible.

Altogether, BasCATball Coach features 30 cat-inspired franchises and over 450 punny names for the players. It’s a simple and accessible mobile sports game that will appeal to gamers of any age.

BasCATball Coach is developed and published by Swipe Studios Interactive, the creators also responsible for Woofball Manager which used a similar theme of combining fun animals with another competitive sport. It was even featured as a ‘Game of the Day’ on the App Store at one point.

You can download BasCATball Coach now from the iOS App Store or the Google Play for Android store, where it is a paid title which costs £0.99.

Read about more of our favourite mobile sports games with this list of the best to download on iOS.
Next Up :
Dead Cells mobile version finally receives all of the current content in the latest update