Banana Kong Blast is the sequel to 2013's Banana Kong. It draws inspiration from Donkey Kong in a number of ways and it's certainly not shy about hiding it. While the original was your fairly standard runner that we thought was merely okay, the sequel promises to be a bit more varied. It's available now on the App Store and Google Play.

In Banana Kong Blast you'll start each level by being fired from a barrel cannon. You'll then make your way through the level by tapping to be fired from each new barrel you get flung into. There will also be sections where you ride around in mine karts and swing from vines, but barrel propulsion is the main mode of transportation.

This turns it from a runner into something more akin to a standard platformer – except you can't freely move – where you can take a moment to understand the timing rather than simply relying on your reactions to get you through obstacles that pop-up. 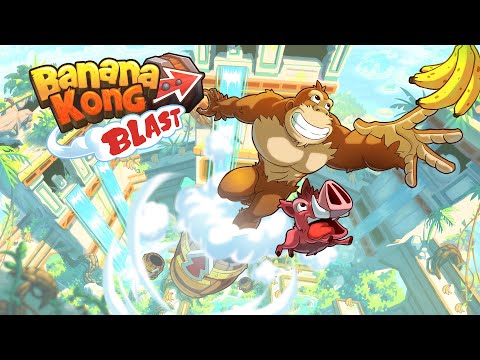 It looks fantastic, taking clear inspiration from its simian namesake Donkey Kong. A quick glance and you'd think it was a new Rare game. It also makes use of 3D graphics in a 2D realm. This leads to sections where Kong will float between the foreground and background which will hopefully give the levels a stronger feeling of momentum.

At the time of writing it currently has 48 levels to barrel through with more reportedly on the way. The soundtrack of the game has been created by Tee Lopes, who was responsible for the music in Sonic Mania, which is a promising pedigree.

Banana Kong Blast is available now on the App Store and Google Play. It's a free-to-play game with in-app purchases.

Check out our news section to discover the latest, and greatest, games.
Next Up :
Another Eden welcomes a new character and holds special contests throughout its third anniversary