Auto Tactics – Battlebound is a new auto battling strategy game from developer Z3 Bros that's available now for iOS and Android in select countries, including the UK, Finland, Sweden, Denmark, Norway and Iceland. It promises to be more approachable than its competition while still retaining enough depth to satisfy ardent strategy fans.

As with most auto battlers, Battlebound tasks players with forming an army between rounds to send into a skirmish. But rather than solely focusing on which units to play, they can also see what their opponent is about to send into battle in real-time, allowing them to pick the appropriate counter.

On top of that, players have limited resources in each match. Managing this well is crucial, particularly since units get removed from the battlefield at the round's end. Even if they survive, they're gone. That means players need to try and win earlier skirmishes by spending as little as possible. Sure, they could spend loads to ensure victory in the first battle, but they will find themselves at a disadvantage for the remaining rounds. 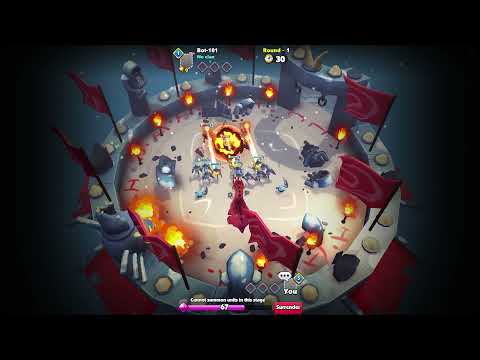 Auto Tactics – Battlebound is currently in soft launch, meaning the development is ongoing with additional content planned for future updates. For example, we can expect a single-player challenge to arrive eventually. It will allow players to create tactical puzzles for other players to try and solve. Elsewhere, Z3 Bros want to implement a guild-based War Map where players can team up with their guildmates and conquer regions together.

Auto Tactics – Battlebound is available now on the App Store and Google Play in select countries. It is a free-to-play game with in-app purchases. Additionally, if you want to get involved with the game's community, the developer has created a dedicated Discord server.

Looking for other great strategy games to play on the go? Here are some of our favourites that are available for iPhone and iPad
Next Up :
Endless National enters beta testing this March, with an Amazon gift card giveaway on Discord