Attack on Titan: Brave Order will be out in Japan on February 11th, with pre-registration sign-ups still open

The popular franchise Attack on Titan is landing on mobile devices soon thanks to enish Inc., with pre-registrations still open. The upcoming RPG lets players unleash their power against the giants in thrilling real-time battles along with fan-fave characters.

In Attack on Titan: Brave Order, players can expect to join the corps with Ellen and Mikasa in real-time combat. Fan favourite characters from the anime will be making an appearance, which includes Ellen, Mikasa, Armin, Levi, Hange and Erwin. The game also features a customisable home you can personalise to your liking.

Of course, the battles will also feature an auto function to make progressing through the game less grindy. There will be a typical gacha mechanic, as well as co-op battles where players can team up to fight back against the man-eating titans. Voice actors, on the other hand, are as follows: 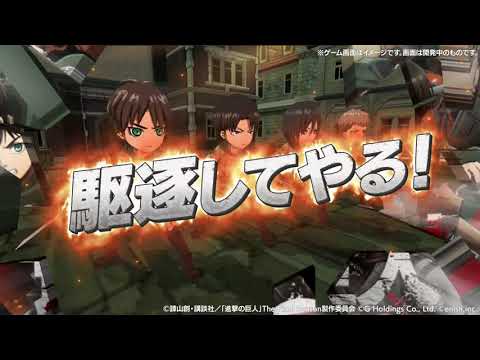 Pre-registration sign-ups are still open ahead of the game's release on February 11th, with milestone rewards depending on the number of players who sign up. The game will only be released in Japan, but you can still try to follow the official Twitter page or the official website to stay updated on all the latest developments or any announcements on a possible global release.

If you're eager to check it out, Attack on Titan: Brave Order will soon be available to download on the iOS App Store and on the Google Play Store for Android devices. It's a free-to-play game with in-app purchases.

Are you on the hunt for more role-playing games that will put your skills to the test on your mobile device? Why not take a gander at our list of the top 25 best RPGs for Android phones and tablets?

Next Up :
Angry Birds Friends teams up with Popeye and The SeaCleaners to help save the seas