App Army Assemble: Aruna's Adventure - Does this nostalgic adventure game lean too heavily on the past?

Aruna's Adventure is a nostalgia-fueled adventure game from indie developer James Swiney that looks to emulate games from the genre that were released in the 90s. So, we decided to hand it over to our App Army to see if leaning heavily on the past can make for a good game in the present.

I’ve quite enjoyed Aruna, its controls may be a little fiddly and it’s very short, but its retro nostalgic charm outshines those flaws. For me the weakest element was the music, it lacked the catchy allure of the games which inspired it. If you’re looking for a couple of hours distraction you really can’t go wrong picking up Aruna.

The look of this retro pixelated game was colourful and seemed set to give an entertaining adventure. However, the actual game fell short of the expectation. It wasn’t a bad game, in as much as it delivered the usual enemies to fight, lives to refresh and a few side quests along the way.

However, the controls were way too sensitive, meaning that the slightest movement sent me racing across the screen. The gameplay was much of a muchness, with nothing new to give it an edge, and the background music was monotonous. That said, it was pleasant enough in short spurts, but not a game that I could play for hours on end.

I’d say it’s a nice attempt at recapturing that old school Legend of Zelda vibe but it never quite does a good enough job of making me feel invested as those old games did. It could be because back then there weren’t a lot of great games like that so we ended up cherishing them, but I think it’s more of the fact that the game gets repetitive fast and you lose all nostalgic love for it.

Instead, you're left thinking that the controls could have been better or that the story really needed a lot more work and in the end, I was ready to leave the past behind and return to the games we have today. I’d recommend it only for someone really missing a taste of that old-time gaming but otherwise, it’s not for everyone

Aruna’s adventure mimics the style and gameplay of the early Zelda games. The 8bit feel is a bit of a nostalgia trip in the modern day of gaming. The combat and story like fee very similar to any Zelda game but the controls are a bit fiddly to work with. The directional buttons are clunky and a simple virtual joystick would have sufficed much better. For a little time-waster, it’s not a bad game but the story and gameplay were all a bit too simple for me to really get my teeth into.

Well if I was going to describe this game as simply as possible, I would say The Legend of Zelda. While it is not a one for one recreation of that game, the art style resembles the 8-bit classic greatly. It is played from a top-down perspective and is a one-screen game with no scrolling.

I played with an 8Bitdo Pro controller, which controlled very well. Unlike Zelda, you are giving direct objectives and quests to complete, making a bit less open. Also, I don’t think the sprite work is quite as good. For example, when you dash, your character just jumps forward with no animation, which I find jarring. The game is very fun, though, and I recommend it.

I grew up playing Zelda on NES and SNES so Aruna's Adventure looked really nostalgic at first glance. Even more, though, it delivers on that same sense of adventure I felt as a child, really for the first time on a phone (if I think specifically of top-down open-world action RPG). While the plot is run of the mill (so far-haven't finished the game yet) it does work well. I found the game easy to understand and get into as well. If I were to offer any critique, I'd say the virtual controls leave much to be desired (but this is true of most games).

It was often difficult to make fine-tuned gestures in battle especially. But it wasn't game-breaking and I still am enjoying Aruna's Adventure. I also loaded it up on my iPad but the virtual controls are pretty impossible there. I'll end with one big bonus: this game doesn't need much in the way of space at all. I think the initial download was 20mb and that's about it. This was a nice surprise when compared when most games take up significantly more space on our devices.

I am a big fan of retro action RPGs so was really happy when I saw this was coming out. The graphics are fairly basic but just about do the job and the music whilst somewhat bland I didn't find too annoying. Most of the basic gameplay mechanics are here that I expected from similar titles but it does feel a little more simplified. The story seems to also suffer from a lack of development with very little reason to care about what is going on.

Still these issues aside I was all set to enjoy my adventure. Unfortunately not having a controller to hand I spent my time with the virtual controls. These were clumsy, lacked accuracy and often ended up covering most of the onscreen action. Therefore trying to battle enemies was as much about fighting the controls as it was the pixelated fiends. I am going to stick with it but would recommend that others only pick this up in a sale if they are desperate for that RPG fix. 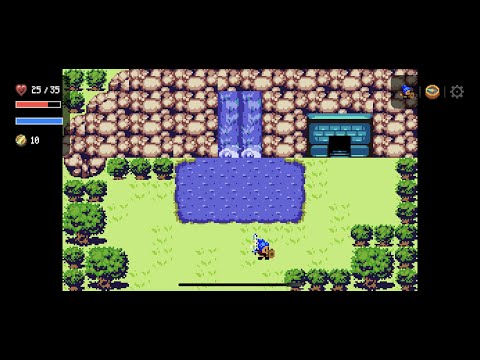 I was expecting a Zelda-like experience for the most part with this game and I was right for the most part. A fairy tells you at the start that you must defeat 5 dungeons and get the ultimate weapon to defeat the big bad guy essentially. The fairly bland plot is not of much importance as the main attraction of the game for most is the 8-bit visuals and styling.

Overall the game looks fine and has a decent, if not always fitting, soundtrack. You are equipped with a sword and can dash to avoid damage. The controls via the on-screen d-pad and buttons are a bit imprecise as mentioned by others. I found the dash move to be difficult to pull off without darting off in a random direction. I believe there is controller support but I have not had time to try it out yet.

There are some small quests like retrieving someone's ring from a small dungeon in a cemetery to get you started and to earn some money to get some upgraded gear. It's nice to get armour upgrades as well as things like boomerangs that have limited uses (save them for tougher enemies or bosses). In all, I am having a nice time with the game but honestly, I would probably wait for a sale. It's a decent enough action/adventure game but not outstanding in my opinion.

I started this game kind of charmed by it honestly. It was a simple, not overly difficult cute 8-bit adventure. But to be honest, the controls are sometimes imprecise. The music is appropriate but repetitive and honestly personally annoying. The virtual D-pad is too big and sometimes you end up covering your character with your thumb, and there you are stuck behind a rock while a snake is having a go at you. If that weren’t an issue- if they could make it smaller or customizable it might be worth keeping for the simple, fairly easy fun. So I’ll keep it in the hopes of an improvement.

I have *never* played an NES - I came to the Zelda series with A Link To The Past on SNES, and I used to play SNES games a lot around my friends' houses, but I never knew anyone who had Nintendo's first console. That means that there's nothing to be nostalgic about with Aruna's Adventure, for me - it feels like a museum piece without too much emotional recognition. Interesting, then you move on to the next exhibit.

I've never liked virtual d-pads but the one in this game was particularly annoying - it's absolutely huge, taking up about a third of the width of the screen, meaning that a lot of the time my character was hidden behind my thumb, which was problematic.

I've played it for probably an hour and a half, I guess, and I'll probably play it a bit more, but it hasn't really captured my imagination. The retro aspect doesn't really move me, so I'm left with quite a simplistic action-adventure. I enjoyed Evoland, which is in a similar vein, but that changes the styling enough to keep you interested. Interesting for retro NES-heads but didn't really do it for me.

A game with Zelda footprint of the old 8 bits. Cool songs and good fun, the game is very simple and with very light difficulty, the only problem in this game is its touch controls that need to be improved as it is easily lost control over the character and can cause some random deaths. Fixing this problem would be great.

So far about an hour into it, I found it to be a bit too retro. I remember playing Link on the NES and the challenge it had. In Aruna, the challenge seldom comes from enemies or puzzles but rather from what I consider a rather clunky control scheme.

Also, the area for hitting an enemy is quite off. I always try to position myself properly for attacks, but often find that I didn't have to as the hit area is rather large. What I did enjoy was the throwback presentation that made me all gooey inside with nostalgia. Would I recommend it? Only to those looking for some nostalgia.

So, I’ve played it and I’m just near the end... I really enjoyed AA, the Zelda-ish art is ok, music is a bit repetitive, a basic gameplay and the 4 ways control is good (I would prefer the 8-way one though). My only concern is that the story and puzzles are too light, the overall game too easy also for newbies, whereby the game may be completed in a matter of few hours. Anyway, it’s a good old style ARPG in true Zelda style.