This is a new story event that is available after completing the North Valencia main quest. Just like any ocean, this one is covered with fog and to clear it, players must traverse through uncharted waters, exploring and visiting all islands which will reveal the regions on the world map. 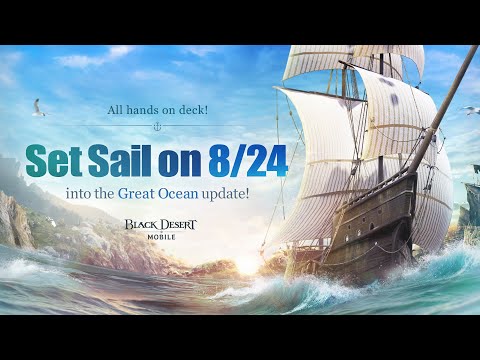 The Great Ocean also has its own form of currency known as Oquilla Coin. It's made from the remnants of the Eye of Oquilla and these coins can be obtained by defeating sea monsters, carrying out fish deliveries, appraisals and other in-game activities. Naturally, you can use them for making trades in the Great Ocean.

Now, to move around the ocean, you’ll obviously need a ship. The strength of your ship depends on your sailing level. Increase your sailing level, and subsequently, your ship stats by fighting sea monsters, completing fish deliveries, and by recovering treasures. Your ships will have endurance levels that decrease with the ship’s use. The endurance will reset every Monday at midnight, so strategize your moves carefully.

The whole travelling through sea aspect has been made quite realistic with wind speeds, where you’ll travel faster with the wind and slower against it. Meanwhile, whirlwinds will temporarily boost speed.

While sailing, you will come across fishing hotspots that will provide you with numerous fish and other items that you can exchange for crafting materials. You'll also get rewarded with Oquilla Coins and building material by completing Wanted Missions, which will involve defeating other pirate ships and sea monsters.

Sail into the Great Ocean by downloading Black Desert Mobile on the iOS App Store and Google Play Store.

Check out some of these awesome RPGs to play on mobile as well!