Contra Returns has launched for iOS and Android devices globally, following a four-year stint of China-only availability. It's a highly regarded IP that creates strong feelings of nostalgia in folks. So, its arrival on mobile has been highly anticipated by players.

The release looks to evoke those nostalgic feelings whilst introducing new elements to the franchise. We recently had a chance to chat with the Contra Returns team at TiMi Studio Group about the game and discussed the challenges in bringing it to mobile, the free-to-play model it uses and more.

What’s the biggest challenge in bringing the classic Contra experience to mobile platforms?

Contra is a classic game series. Contra and Super Contra were very popular at launch in the late 80s and early 90s, its fixed screen format and a pseudo-3D view left an impact on players.

When working with this type of IP, the biggest challenge is how to balance the classic elements with extending the mobile experience so that players can recall their fond memories of the franchise, but be motivated to play in the long term.

Ultimately, we decided to keep the original control experience in single games and restore some elements from the classic game: the red pants, blue pants, and some of the bosses. The memorable soundtracks will also be coming back so players will be reminded of those classic moments when playing the levels.

We have upgraded the art and added more content, building a new world story and adding more heroes as the story progresses so that each character will have their own stories and social network. In this new game, our two heroes look more like partners. In terms of play modes, we’re planning to add more depth to the 8-level game through more strategic game battles. This depth elevates Contra: Returns to a game that can sustain for 1 month, 1 year, or even 10 years, with playable levels and PVP modes that can support a long-term game experience. We also have an abundance of content designed to keep players engaged.

Do you prefer to restore the original game experience, or try to experiment with new play modes?

Although we expect players to be drawn to the game by the nostalgia of the classic Contra, we found they don’t want or need the exact game experience. Instead, they look for the feeling that they once had when playing this game in their childhood. The classic Contra elements include the spread gun, jump flips, red pants, blue pants, and the exciting shooting battles. In the long run, we knew the game would need to stay current in order to retain users. In addition to the traditional RPG game mode, we incorporated MOBA elements such as PVP, PUBG-style play modes, Roguelike, and other new modes. We also upgraded the battle experience where we added Hero specific skills, teams, vocational skills, and other battle skills. The key to engaging players in Contra: Returns is to keep providing them with new game experiences.

The art in Contra: Returns is more modern; how did you decide on the current aesthetic?

We retained some of the original elements and the art gradually evolved to the current style in large part due to user research. The Contra IP originated in 1987, and at the early art stage, we engaged in experimentation from scenes to characters in order to keep up with the current trends while retaining the feel of the original IP. The art will continue to evolve as the game story progresses. While we’re excited to bring back the classic IP, we also want to provide our players with a fresh visual experience. 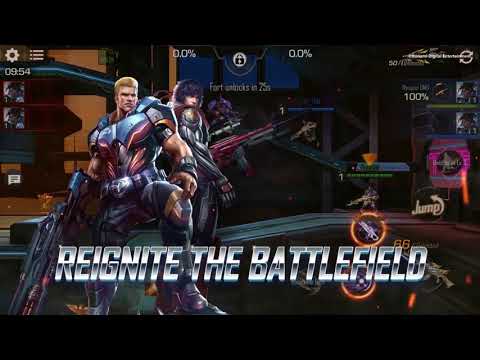 When a familiar paid game series becomes free, players often raise scepticism, and how would you address this question?

Most of the Contra: Returns in-game experiences are free. Classic characters, weapons, level design, and more will be released to the players for free as the game progresses. With free content alone, it provides far more experiences than what the classic Contra games offered. For players who seek even better game experiences, we’ve created new weapons, new characters, exquisite new skins, and new barrages that players can unlock with additional in-game purchases. In addition, there are also competitive play modes that are not in the classic Contra game. They won’t affect the main PVE level challenge experience.

This game was published in China during 2017, and what made you decide to publish it globally? To elaborate, what are the deciding factors, and why publish it 4 years later?

First, there’s the worldwide popularity of the Contra IP; we hope to evoke players’ childhood memories. Second is after four years of iterative testing in China, we’ve accumulated a lot of popular play modes in the field of shooting games. We hope to bring these full game experiences to a global audience. And lastly, we have updated the play mode UI to target our global users after a series of testing. We believe that this will deliver players a new and engaging game experience.

Contra Returns is available now over on the App Store and Google Play. It's a free-to-play game with in-app purchases.

Looking for more action games to enjoy on your phone? Here are 25 of the best available for iPhone and iPad

Contra Returns is finally out on iOS and Android, so fans of the classic run-and-gun franchise can now rest easy

No fair, only China is getting the new Contra game for iOS and Android