Ninjas? Donuts? Really, this game had me sold on concepts alone. Ninja Chowdown is a beautiful, pixel art runner where you need to dodge bombs, avoid birds, watch out for waves and shoot moldy donuts, swords and more at enemies in your path. Your character runs forward, always, trying to save the know-nut from enemy hands!

You see, you are a ninja who lives at the back of a donut shop. You love donuts - far more than being a ninja, but that won’t stop you from your goal of getting the know-nut back. So far, nobody has told me what the know-nut does or why it’s important, but who cares, we love donuts so let’s get it back! 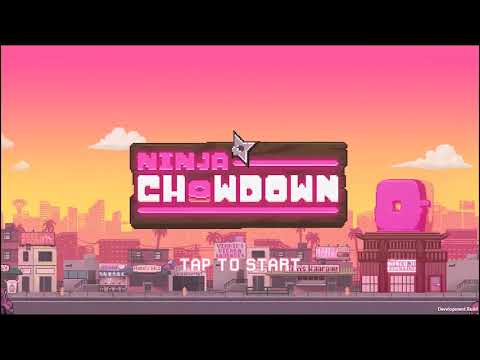 Playing each level becomes muscle movements and reactions, as enemies fly in from the top of the screen, from the left and the right, and objects appear at the bottom looking to trip you up. Each run is chaotic, with so much going on at once, but they are also decorated with tons of donuts that you can collect. The left side of the screen can be tapped to jump and double jump, whereas the right side can be tapped and dragged to aim your weapon out, firing it towards whatever enemy you want to take out.

Fighting down enemies will gain you coins at the end, though I find a lot of the time I am just trying to dodge and stay alive. If you collect enough donuts to fill your donut meter, the whole game changes. Your character suddenly becomes a huge ball, rolling and bouncing wherever you swipe, destroying anything on the screen. You can still collect donuts to keep you going, but this mode does end fast and you’re back to the chaos.

When you complete a level (or die) you are rewarded with coins that can then be spent on new weapons, cosmetics, and pets. Pets don’t actually do anything, which is a bit of a shame, but they do run alongside you in the house adding some character to the game. You can also see how far you made it along the level, if you did die, so you can see how close you were to winning. Ninja Chowdown does have boss fights at the end of each collection of levels, before you end up in the next world with new enemies and more.

Ninja Chowdown will challenge you, but as the game is free and not constantly full of ads, it’s a fun game to get addicted too and it’s easy to have just one… more… run...

Ninja Chowdown: Three things to know about this eat and run kind of game

Ninja Chowdown: Tips to help you in this funny endless runner

Punny auto-runner Ninja Chowdown is out today on iOS