Meet them both in the Sugar Fruits event

Gram Games and Zynga has kicked off another in-game event for their popular puzzler Merge Dragons. It's called Sugar Fruits and is set to run from today until October 19th, introducing a new type of dragon to the ever-growing collection of winged-beasties available.

As you'll likely have guessed simply from the name of the event, these dragons are based around different sweets. They are called Bon Bon and Nilla Dragons with both being adorned with various different pieces of candy, fruits and other sweet treats. In addition to these dragons, players will also be able to collect unique crystal fruit items from this event. 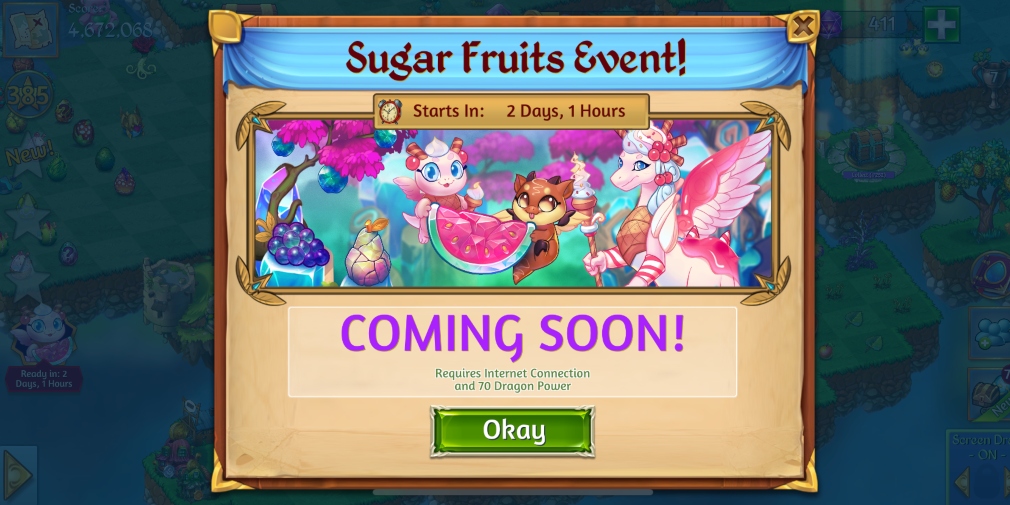 Discussing this event, Eren Yanik, Chief Product Officer at Gram Games said: “Events are a key part of Merge Dragons! and we love engaging our fans with new and exciting challenges.”

They added: “Our team had a lot of fun pulling this event together, one that provides unique crystal items and dessert themes to a community of players who are always hungry for the sweet taste of victory!”

If you're unfamiliar with Merge Dragons, it's a puzzle adventure game where players set about healing magical lands whilst also harnessing the immense power of dragons. Everything can be matched and merged to create artifacts and skills.

It's proven to be a popular title since it first launched, given the simple nature of the gameplay and the sense of satisfaction there is to be found in merging mechanics. Previously the game has had crossover events with the likes of Rick and Morty.

Merge Dragons is available now over on the App Store and Google Play. It's a free-to-play game with in-app purchases.

On the hunt for some stellar RPGs you can play on your phone? Here are 25 of our favourites for iPhone & iPad
SEE COMMENTS