Rising Sushi is a tower stacking game from indie dev Ivan Alcaide where players will make a giant pile of sushi instead of the usual big building. Sounds like a tall order then and one we felt would be best handled by our community, the App Army, who have stacked a fair few towers in their time I'm sure.

I didn’t enjoy this game. Although its music and graphics hinted at a good game to follow I’m afraid I didn’t spend more than half an hour before I called it quits. The controls were so difficult to master and even after a while it got no better. As a rule, I try to figure out the mechanics of a game but I found it difficult and after failing more times than I would have wanted (and returning to the beginning of the tutorial), I'd had enough. I’ve played this kind of game before and thoroughly enjoyed them, but with the poor controls, this one isn’t for me.

Relive those frustrating grabber games in the arcades with sushi instead of prizes all rendered in pixel art graphics. I like the look of the game and music but was quickly frustrated by the control mechanism (tapping to drop your grabber and tapping again to pick up your bit of sushi and then tapping again to drop it on a pedestal and build up a stack) which leads to plenty of missed grabs. Not helped by a poor tutorial that does not explain the gameplay very well.
Frustration lessened with repeated playthroughs but it’s a game I did not find all that fun to play and cannot recommend it. 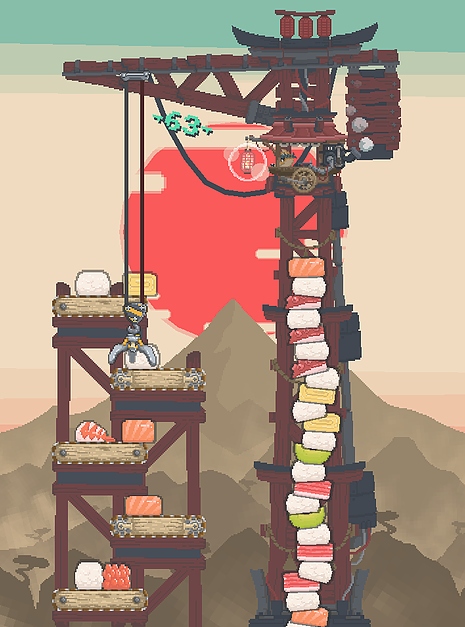 I have to admit, I didn’t get very far with this game. Partly a crazy work schedule but also because I found even the tutorial frustrating. And not just because after making enough mistakes I had to back out and start again. Mistakes like dropping a piece of sushi too early or too late, and you get to the point where you don’t have any more to pick up. But also because I love the look of the game and especially the big claw. I wanted to like this game from the opening screen. But while the controls work just fine and the game has a great look to it, I simply wasn’t interested enough to work past the frustration. If you’re a fan of the sushi game craze, you’ll probably enjoy it. It just wasn’t for me.

Click-hold-release. Click... Click. That's 90% of the game. Surprisingly difficult, too. This is basically the crane game, coupled with a tower stacker. Use the crane to fetch and retrieve a sushi piece, then drop onto the tower. At the start, the fresh pieces only move after you're done using the crane. Later, the fresh pieces constantly move too. Let 3 pieces fall off the stack and the game is over. Get 3 perfect placements and you get a super sushi stacking thingy to boost your score.
Really simple arcade game. Kind of addicting. Fairly simple, but still difficult.

Some things are best left alone I’m actually a fan of sushi and at first glance, the makers of this game seemed to be as well, but once I started the tutorial I was amazed at how difficult they had made the seemingly easy task of stacking the ingredients. Honestly, I was ready to put it down after the tutorial as it just wasn’t turning into a fun game. I liked the look of it but there was just too much to do to achieve a simple task that felt unnecessary.

If I had to summarise Rising Sushi into a single sentence, it would be that "it has potential, but it's marred by some really poor design flaws". What that entails is that the game looks good, sounds good, and it's even got an interesting premise, however, the actual gameplay is so frustrating that one could be forgiven for smashing their device after 10 minutes of playing this game (although please don't do that!). So the gameplay is as standard as stacking games go - you have to stack sushi as high as you can to score points and clear objectives - however, it's how you actually go about doing that, that makes the whole experience frustrating - you have to use a crane arm.

And yes, just like those amusement park machines with prizes, this is as annoying to control as you can imagine. The crane hand is controlled by holding a finger on the screen and then you let go to lower the arm, which is followed by a tap to actually grab the item you want, and then you have to make sure you drop it on the pile. The problem is that the game is as inaccurate as the real crane arms! Everything down to timing and actually grabbing items is so inconsistent that I feel like either the game is released in a buggy state or no one bothered testing the game before releasing it. Also, I should mention the annoying forced tutorial that lasts way longer than it should.

All in all, it's a game that had potential, but it's controls are frustrating as all heck, and in a game where the whole point is controlling a crane, and you have inaccurate controls, what else is there to talk about? I should point out that I also tried the game on my Galaxy Tab A 10.1, and another android device to make sure it wasn't just poor optimisation for my Galaxy Note 10, but nope - if anything, it felt MORE inconsistent with my other devices! 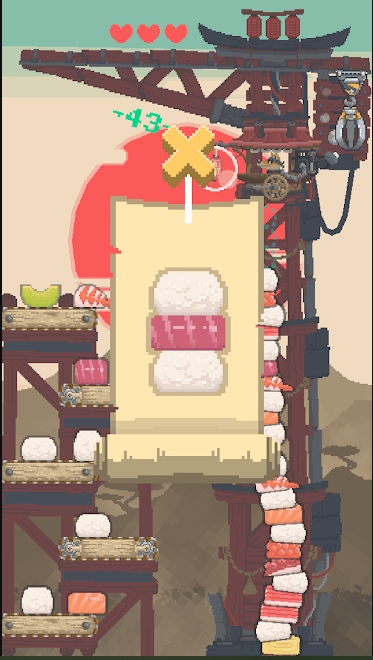 I played the game for a while and it was too frustrating to carry on. I have played lots of games and written lots of reviews of them but this game was probably the most frustrating game I have played in a long while. The essence of making a good game is that the control system should be intuitive and be almost invisible to the player. The control system for this just seemed wrong, you seem to spend more time fighting your natural instinct to hold the screen to form an action when you should be releasing your finger to tap again.

There is no reason I can see why the whole game's controls could not be overhauled and make it more playable. The tutorial is also just maddening, it implies you need to form a stack with pieces it doesn’t give you, I think I spent more time looking at the screen with a puzzled expression on my face than should have been necessary, given the actual simple nature of the game, which is basically stacking blocks to complete patterns.

The graphics and sound are good, but the gameplay needs an overhaul. I don’t know if the game goes on to offer you more challenges or introduce any new mechanics as it just lost me minutes into the game. All this is fixable with a bit of a rethink until then I really find this really hard to recommend.

Rising Sushi is a game where you have to stack sushi but the game starts bad with confusing tutorials, even though I spent a little more time not being able to understand the mechanics of the game very well except to stack more and more sushi, with that the game became repetitive. I'm sure that if the developer works a little more on the mechanics of the game it can become something very fun among casual games 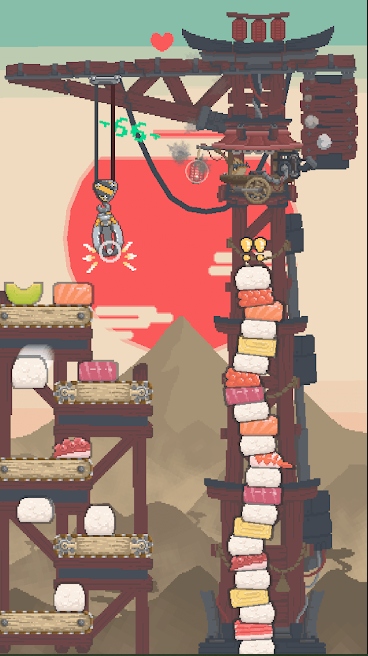 After a long and somewhat frustrating tutorial, I was eager to see what the game had to offer, however, what I found was a pretty shallow and equally frustrating experience. The controls just didn’t seem to click with me, something felt a bit off, which meant I spent quite a while training my brain to get the hang of it. After that, the repetitive nature of the game set in and there didn’t seem to be enough of a hook to keep my interest. Would be hard pushed to recommend over the many other more fun similar titles that already exist.

Now, I like my sushi! But a sushi stack 84 pieces high is a bit much! You take the role of a claw that is designed to grab pieces of sushi and build a tower with it as high as possible. At certain points in the game, it will give you an order of pieces of sushi that you must build. There is also a manic mode where a dispenser unleashes countless pieces of sushi that you must stack on your tower! It’s a fairly basic game with a very repetitive style. You’ll enjoy the game if you enjoy chasing high scores... and stacking sushi.

Rising Sushi is a quirky action game that has you stacking pieces of sushi roll higher and higher. There is a very small margin of error. The tutorial doesn’t do a very good job of really teaching you the expectations of the game and what is exactly required to obtain points and move on. I found the game to be a bit frustrating and tedious which is a shame, I had this game on my wish list when I first heard about it. Perhaps if a crane wasn’t used and there was more than just tapping at the right moment, I would have had fun. Instead, I forced myself to keep coming back to make sure I was giving it a fair shot. Not a bad game, but one that just didn’t keep me coming back.

Astalo: Some tips for this fast-paced slashing action game