Three years on from Slay The Spire's Steam Early Access release, the time to play the proto-card-roguelike on iOS devices is finally upon us. There's certainly been a lot of pretenders in those three long years - even just in the year and a bit that has passed since it's full 1.0 release - but it remains a title that should definitely be on as many platforms as possible. It is, after all, a must-have game.

It's tricky when it comes to writing about games which have had massive success on other platforms long before the mobile version appears. There tends to be a lot of hyperbole or exaggeration, "The King is back", "A masterpiece reborn", etc. Maybe that's a fair way to react about a genre-defining game coming to a new platform... Regardless of that though, there's definitely a discussion to be had about the quality of the port, and how it handles on a new platform.

That's the thing, as I'm sure you've noticed already, I'm an avid fan of Slay The Spire. I've spent many hours between both the PC and the Xbox version, and many of you reading this might well have done the same. If you're in that boat then you can skip right down to the section all about the porting, but for those of you who haven't, I'll go over my general thoughts on the game below.

Slay The Spire's fusion of RPG-Roguelite and deck-builder certainly wasn't unprecedented, developers had been tinkering with bringing card-based mechanics into other genres for an extensive amount of time, but Slay The Spire mastered combat legacy and escalation in a way that hadn't been seen before - and therein laid its greatest strengths. It was that mastery of escalation that led to the modern card-roguelike genre as we know it, Slay The Spire was a trailblazer.

Your earliest runs, when playing, will have you take on the role of the attack-based Ironclad, but, after a couple of runs you'll unlock the other two (on mobile) options. Each of the characters, from the strong-armed Ironclad through to the more technical Defect (which builds up attacks by summoning orbs) each work as a brilliant starting template for a run. 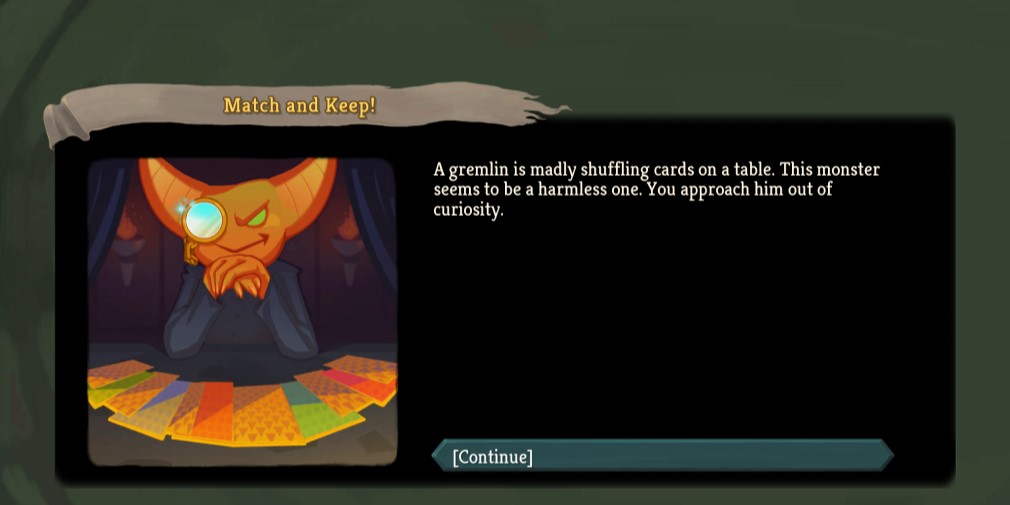 In concept, Slay The Spire is very simple. You have a starting deck of cards, normally extremely small in number, as well as a starting artefact. Artefacts are modifiers, like equipment in RPGs, while the cards in the deck will make up your hand - which is your possible moves. As you win battles you'll gain artefacts and new cards, expanding your skillset and honing your character - however, if you just expand your deck all willy-nilly then you'll end up with a character who is unfocused, ineffective and dead.

As well as this, there are also events littered throughout each of the (run-generated) paths you can take. These are a great way to get rewards and boons, but you're just as likely to pick up something negative while there too. When you add this risk-reward loop to other elements, such as negative cards and artefacts - curses and the like - it becomes clear that the only way to fully ascend the spire is to choose smart and have a combat strategy in mind from the get-go. 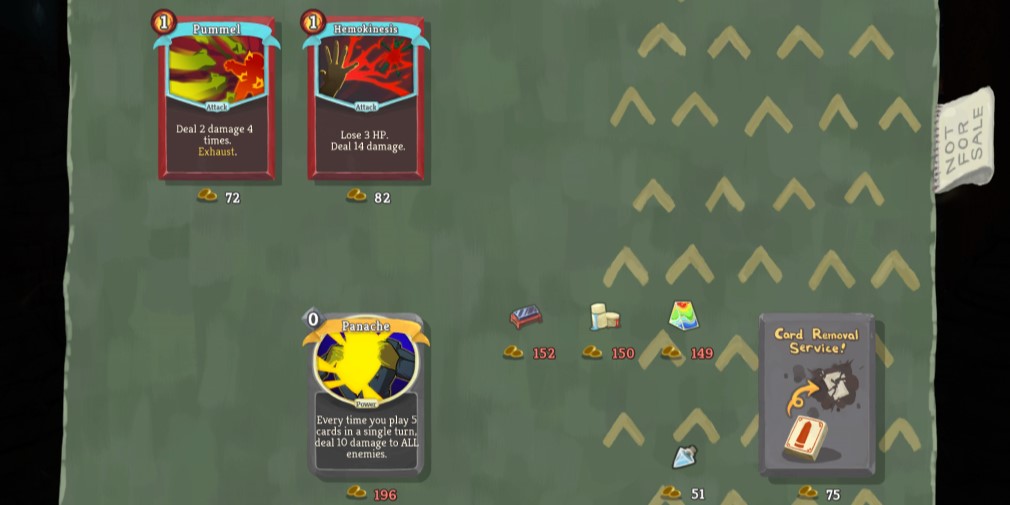 In addition to all of this, the Spire itself is filled with mini-bosses, stores, and campfires where you can rest to regain health, or smith to upgrade your cards. There's, ultimately, a lot of potential in each run. It's a well-balanced layer of content carefully slotted over the top of simple, pick-up-and-play gameplay - at the end of even a single-floor run, your character will be incredibly different than how it started the journey.

Slay The Spire on mobile is, as with the core game, all about mastering your deck choices, familiarising yourself with enemy attack patterns, and building up systems within your deck which will allow you to overcome even the strangest situation. It's reminiscent of 'Engine Builder' board games like Splendor, Dominion, Terraforming Mars and Mystic Vale. Even by the time you reach the first boss, there's potential for you to start combat with a dozen cards in hand, many of them free, and five, six, or even more energy with which allows you to use those cards.

The first time that I played Slay The Spire to any great depth was when it released on the Xbox One in September of last year. The UI between PC, Xbox One and Mobile is actually surprisingly similar, and my only real complaints about the Xbox One experience was that some of the buttons to get around menus were easy to forget. Hitting a button to open the potion menu felt a bit awkward, and the combination of buttons to get details on temporary, mid-combat modifiers was tricky until the process was hammered into my mind.

Good news then. The iOS version's use of the touch-screen is fantastic, there's no clunky slide-up, or 'hold a button to navigate menu controls' as you might have found in a console version, however, some of the UI doesn't quite feel right.

For a start, the confirm or skip buttons are regularly off toward the bottom right of the screen, an area that right-handed players would cover over with their wrist when they make a selection on-screen. While the affirmative is over there, the cancel button is about as close to the centre of the screen as a button could be - a little redesign here could have really minimised accidental misclicks. 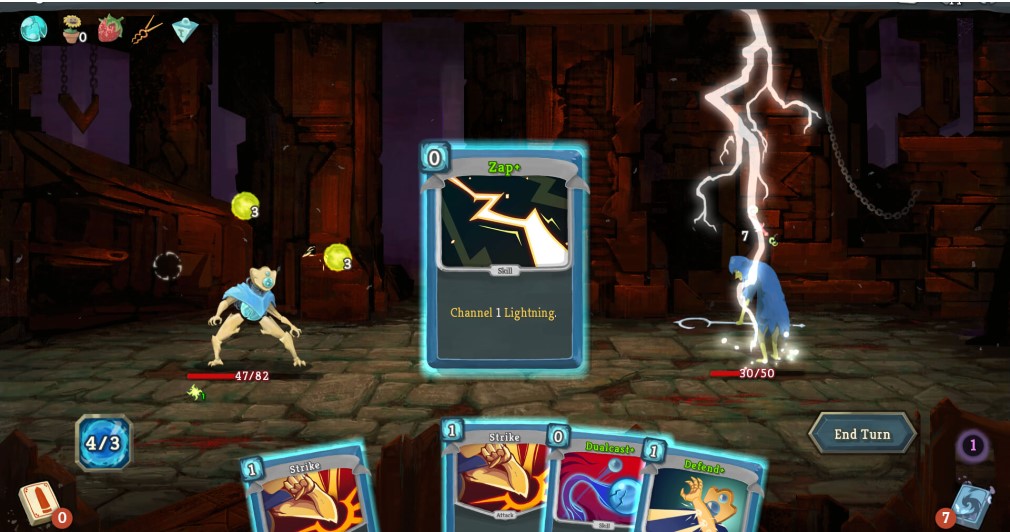 There's also an absence of 'click to confirm' options at certain points in the game. In that, you might tap down on an artefact or card to try and find out more, only to find that you've selected it and taken it. Like everything in games you do get used to it, but in games where every choice can really matter, it could cause a little resentment.

All of that said, I've been playing the game on an old iPad, one about to fall out of the 'supported product' loop, and the game runs perfectly - it's clear that Slay The Spire on mobile has either been massively optimised or was already pretty tightly coded from the start.

The heart of the spire

Slay the Spire is all about learning patterns, making choices and resolving tough decisions to grow your own knowledge and also grow your character.  It is one of those rare products that - similar to FTL, Mario, Angry Birds and more - can competently and comfortably introduce players to a whole new genre of games. Besides from the button-confirmations, the only complaints I can see people having about the game are the systems that power it themself - and much like anything, once you engage with it long enough it all clicks into place like a fabulous engine.

You can grab Slay The Spire right now over on the AppStore.

Slay The Spire was already a sub-genre defining classic, now that it's available handheld it can be played on the go, or away from the big screen, and that's great. It's a competent port which, with a little tweaking and refinement, could be perfect.
By Dann Sullivan
| Jun 13 |
iOS
Find out more about Slay the Spire
SEE COMMENTS