Garena Free Fire's stylish Spine Punk event is now well underway, and so, naturally, everyone's attention now turns to its much-hyped Peak Day. Beyond that, there are lots of other upcoming in-game events to get involved in, so I've gone and put together a little rundown of just about everything headed to Free Fire this month.

If you're yet to get involved in the Spine Punk event, it takes the world of Free Fire into a future of enhanced cybernetics and spinal augmentations, where everyone is a cool punk, totally unlike the slightly embarrassing punks you still sometimes see lurking around dingy bars. Up for grabs are exclusive futuristic skins and a special emote of your choice. It also gives you the chance to join a badass Punk Squad to earn further rewards.

The Spine Punk event's Peak Day is this Saturday, May 16th, and it's worth keeping that in mind if you fancy netting yourself a new emote for simply logging in on the day. Once you're in, you can then fight it out to win an Evolution Stone, which is the one and only way to earn an Incubator Skin Bundle. Have I lost you yet?

You should also know that the only way to earn an Evolution Stone is to "Booyah" once in the game's standard battle royale mode. It's said to be an extremely valuable item, so if you're a long-time player and reckon you're good enough, you should probably put in the effort to earn one while you can.

The Let's Punk Skull Exchange actually kicked off on May 9th, but it's set to run until Monday the 18th. Here, plenty of Punk Skulls will be available to collect from airships flying over the game's map. These can then be exchanged for the Violet Terror weapon skin, the Punkster profile pic, the Neon Ridges costume set, and the Spikey Spine loot crate. 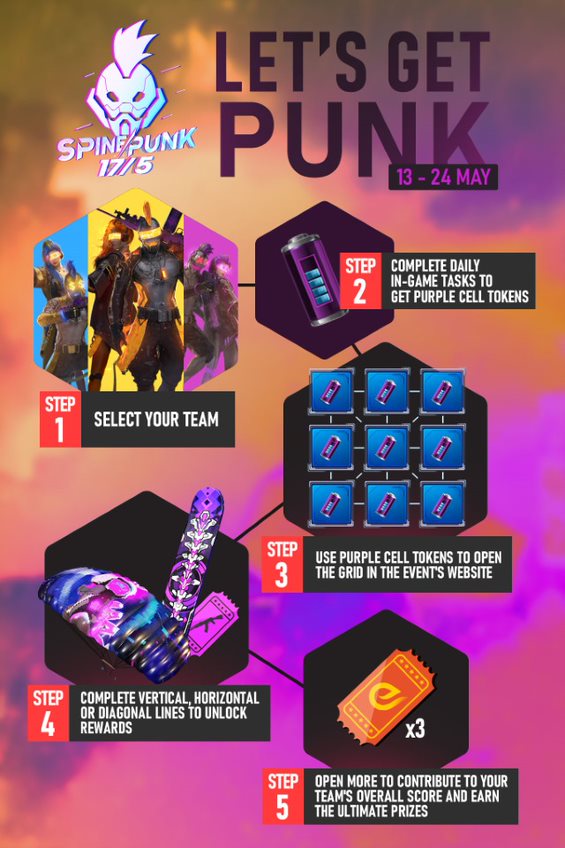 The Punk Squad event started yesterday, May 13th, and will run until May 24th. This sees you picking a side and joining either the Orange, Blue, or Purple Punk Squads. Once you've enlisted, you'll help your squad by completing Punk Mission Board objectives in the hopes of earning a high enough score to unlock some exclusive goodies, including the Punkster Surfboard and Street Dominance Parachute.

From May 16th to May 24th, all game modes will count towards earning you a special Punk Box. Inside, you can find items such as the Cyber Skull profile pic, Neon Evolution banner, and Spikey Spines backpack.

And last, but by no means least, we have the upcoming addition of Gun King mode. With this one, you'll get a random gun at the start of the match. Once you've managed to earn yourself a kill, you'll then switch over to another weapon, with the guns growing increasingly difficult to use over time. Whoever's first to progress through the 13-16 weapons will win the game. It's a little like Call of Duty's Gun Game mode, if you've ever played that? This limited-time mode will be available from May 16th to May 24th.

And that's just about everything set to arrive in the world of Garena Free Fire this month. If you're a battle royale fan and haven't yet given this one a go, you'll find it available for download now as a free-to-play game over on the App Store and Google Play.

In need of some top-tier multiplayer games to try with friends? Here are 25 of the very best for Android
SEE COMMENTS