Don't let choice paralysis get you, just play one of these excellent board Tabletopia games

Tabletopia isn't a game, it's a platform for games, which is even more important during these times of social separation. Much like other online multiplayer games, it looks to offer players the ability to share these experiences with their friends, and there is no gaming genre which is being left neglected more than board games.

Tabletopia offers hundreds - and I really do mean hundreds - of board games for you to play by yourself or with friends. This is exactly why you'll find this list of best Tabletopia games helpful! You will find familiar brands and franchises like Resident Evil, in addition to hundreds of popular board games you might not have even heard of unless you're a die-hard board game fan.

Pick some of the best Tabletopia games to start with!

But with so much choice comes choice paralysis. Booting up Tabletopia meets you with too much selection, too many options, many of which will take you an hour just to try out and get a good feel for. Which is why you should skip choosing from hundreds, as we've narrowed it down to just seven.

You are sure to find a board game that appeals to you in this list, and we've only listed some of the most celebrated and highly-rated games of all time, according to the community on BoardGameGeek. So take a look below, pick out your favourite, and give it a try with a few friends.

Tabletopia's subscription model is shockingly cheap for the content it offers, and a Gold account that allows you to invite guests to games will ensure you and your friends have hours of fun ahead. The big blue button below will lead you into the world of the best Tabletopia games you can play in the present time!

Brass is a well-known and beloved board game franchise from Martin Wallace, and Brass: Birmingham is the sequel and the most celebrated entry in the franchise. Taking place during the industrial revolution in Birmingham, you must develop your industry and business infrastructure to overpower your opponents.

This game won multiple strategy board game awards in 2018 and 2019, making it a perfect place for new board game players to get started. There are a whole variety of different mechanics and industries in place for this version of the game, which could make it overwhelming for new players, but with Tabletopia keeping the rules in check, it's much easier to understand.

Scythe is a game about building engines, but don't let that scare you off from what could be an incredible gaming experience. Set in an alternate-history Europe, the land has been ravaged by mechanised warfare, and the city-state which supplied the mechs has closed itself off.

With The Factory out of the way, you are your fellow players start at different points surrounding The Factory with different resources, skills, abilities, and more. How resourceful you can be in gathering more resources and building up your assets will decide who wins. The game doesn't have traditional rounds of phases, which allows players to regularly make choices and stay engaged in the game.

Terra Mystica is a modern classic. Each player governs one of 14 groups of people who live in seven locations, and the goal is to take land and make it home to your group of people by terraforming the land. You will make strategic decisions with the information provided to you, and attempt to outwit your opponents to make your people prosperous.

You can make the decision to ally yourself with other groups, but that will limit the amount of land you control and could make it so you end up surrendering yourself when the end of the game comes. A pacifist run is possible, but war is advisable. It's one of the best Tabletopia games in our opinion, but you should try it out for yourself!

Oh, to be a bird flying in the sky, how majestic. In Wingspan, you will be an admirer of these birds, an ornithologist, and you will be using this card-based board game to compete against other players to attract and document all of the rarest and most beautiful avian species.

After four rounds a winner is decided, making this one of the faster-paced games on the list, and perfect for your first game in Tabletopia. There are loads of bird cards included in the game, and wouldn't you know it, Tabletopia also includes a Wingspan expansion, with even more birds. 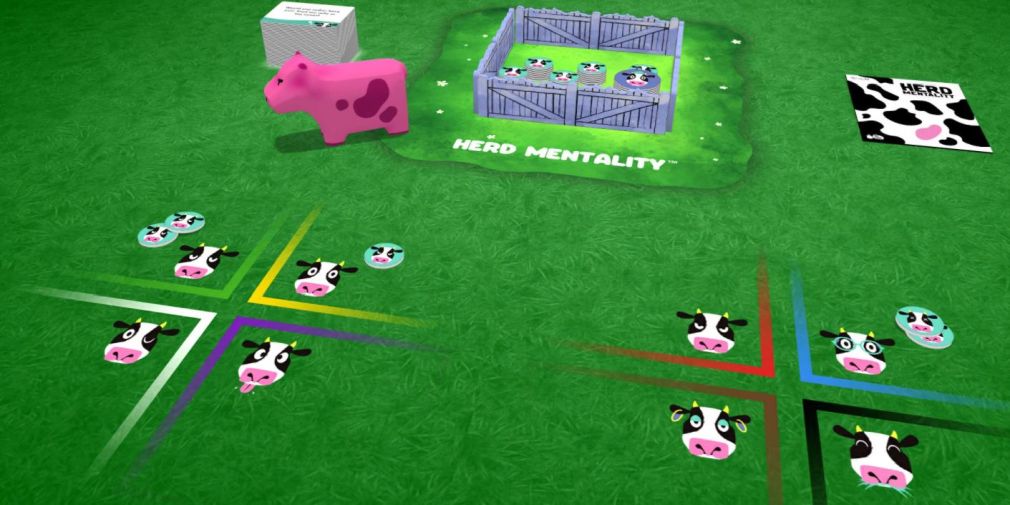 Herd Mentality is a game all about being predictable. In each round, there is a question presented to all players. They must then submit what they think the answer is, and the most common answer will earn everyone who picked it points. If you pick an answer that nobody has picked, making you the odd one out, you will be unable to win the game until another person ends up becoming the odd one out.

It's a simple Tabletopia game that's easy to play and understand! We recommend you give it a shot since it's one of those smaller but super fun games that are ideal for short, half-hour play sessions.

Wine is the essence of life, or so some people say, and that's certainly the philosophy to live by in Viticulture. In Viticulture you are a small-time vineyard owner, and it's up to you to turn your small plot of land into a booming industry.

You'll have to navigate the troubles of getting harvests and workers in different seasons, attracting guests to your vineyard, making and selling shipments of wine, and more. In the Essential Edition, there are more properties and variable cards than ever before, making the game much more dynamic. One of the more fun farming strategy games.

In Medieval France, you must gather all of the workers you need to have the city of Orléans rise to new heights. You'll be seeking out knights, religious monks, merchants, farmers, and more in order to make your city prosperous and take the city to new glory.

You can have your different units complete different tasks, for example, Knights can seek out new lands and new business opportunities. Expand your horizons as much as you can, and victory is assured in this medieval strategy.

Verdant is similar to Wingspan in a way - you have a massive collection of plants to care for and you are trying your best to create a beautiful and prosperous environment for your plants. You can collect and arrange various objects around the house, but it comes with a twist - you have a series of puzzles and spatial cards to rely on.

Resident Evil 3 is a bit of an oddball choice, but it appeals to those of you that do not usually dabble in board games. The brand new board game of Resident Evil 3, based on the original game, isn't even out yet, but there's a demo available on Tabletopia.

Managing your tools and items is key in this game as you attempt to escape Raccoon City while surrounded by hoards of the undead. This is a brand new take on the classic game, and with the same designers as the acclaimed Resident Evil 2 board game at the helm, it's sure to be fun for fans.

Building up a town from a world destroyed by plague, you will be running a farm in Villagers, deciding if refugees from the road can join your town. With a limited amount of resources, you will need to decide carefully, trying to manage people, their jobs, and keep your food supply increasing so that your village and home can be the most prosperous.

Hopefully, our list of best Tabletopia games has helped you pick the one you'll start with and have countless fun hours!