He'll be joined by his monster mate Giganto Jr

Kabam's Marvel Contest of Champions has added a new supervillain to its roster. This comes in the form of the diminutive Mole Man who will bring a host of unique abilities to the popular action game.

Whilst certainly not one of the more commonly known Marvel villains, Mole Man is still popular amongst the wider Marvel community. In-universe, he was shunned for his small stature by society and expelled from a promising academic career for his beliefs in Hollow Earth theory.

He eventually stumbles on the realm Subterranea where he's blinded and consequently dubs himself the Mole Man. It's not all bad news though, he eventually befriends a subterranean beastie called Giganto Jr who loyally accompanies him into battle.

The duo will work together in the game with Giganto Jr being capable of soaking up huge amounts of damage in place of his pal. He can also purify any debuffs that come their way and convert them into Monster Mass. 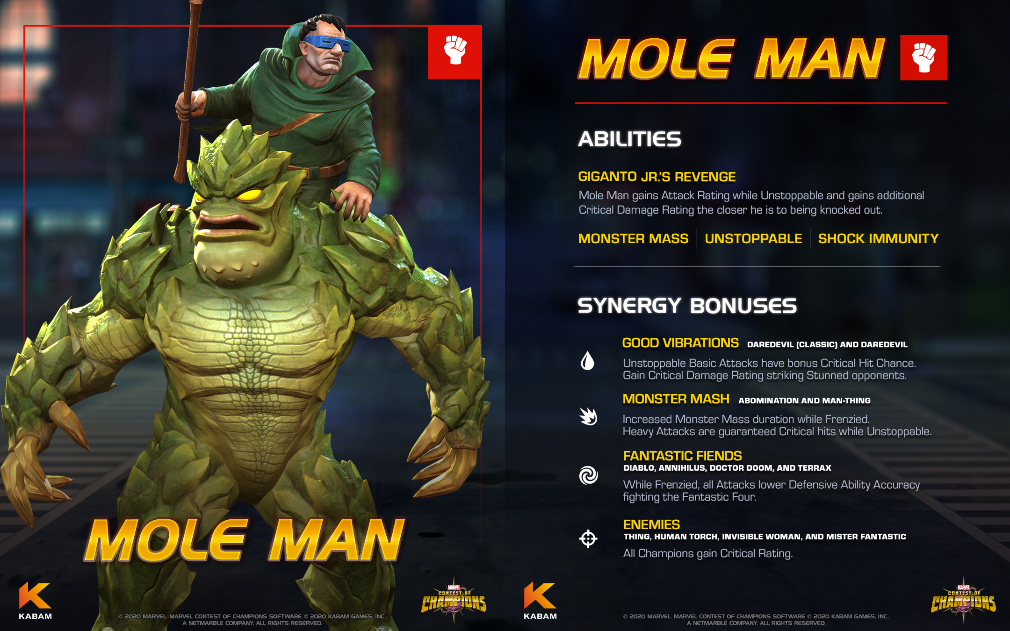 Stacking this allows the pair to counter-attack any opponents that dare attack their Block whilst allowing them to tank Heavy and Unblockable hits. They're not entirely invincible though, so once their HP has been significantly reducing they'll go into Frenzy mode which causes all hits to become Critical.

It's not all good news for the underground twosome, however. A significant portion of their damage stems from Bleed Debuffs, so any champion that is immune or resistant to this type of damage will have a far easier time fighting them.

Additionally, any Champions that have access to any abilities that cause Stagger will be able to manage Mole Man's Unstoppable Buffs by limiting how much Monster Mass he can accumulate.

Interested in the best upcoming games? Here are 53 of the best available now in soft-launch
SEE COMMENTS