The original most powerful Pokemon arrives in Pasio

Pokemon Masters’ highly anticipated legendary event, Lurking Shadow, has begun today, bringing Giovanni and Mewtwo into the game as Sync Pair for a limited time. The event runs from today until 19th December, so you’ll be able to grab this new Sync Pair in plenty of time if you’re happy to do some grinding.

The event adds a few new story missions to the events page where you’ll be able to learn more about Giovanni and Mewtwo's plans for Pasio. Once you’ve done that, you’ll mostly set about grinding to unlock the story event that will allow you to add the pair to your team. 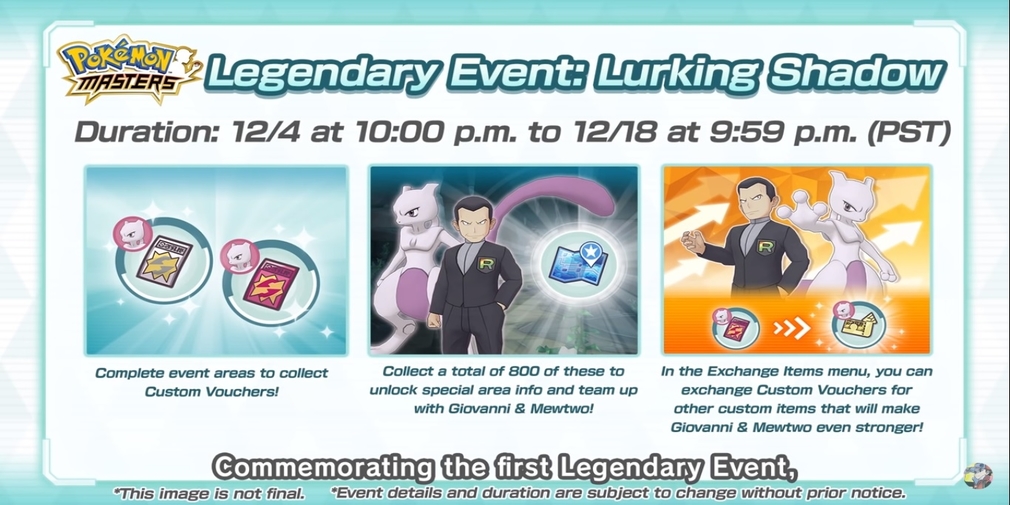 To do this you’ll need to obtain 800 Custom Voucher 1. This is a little confusing in places because there are two vouchers to collect during the event. One set of these vouchers can be traded to get items that will make Mewtwo more powerful, whilst the other set will allow you to eventually unlock the pair. Your total number of vouchers can be viewed from the event page itself so you can keep track much easier.

This means that you’ll mostly spend your time completing the ‘Take Down Giovanni’ quests in the co-op events section so you can earn enough vouchers to unlock that extra piece of story content that will eventually see you rewarded with the duo. Each of these missions will give players a bonus amount of rewards for the first time they complete it each day.

Unsurprisingly Mewtwo will take on the role of a Special Strike Pokemon when it can finally join your team. It has access to a variety of powerful attacks as well as a move that increases it’s evasiveness and critical hit rate so that you can hopefully hit harder and not get touched much yourself.

Pokemon Masters is available now on the App Store and Google Play. It’s a free-to-play game with in-app purchases.

Beyond a Steel Sky won't launch for Apple Arcade until 2020