Pokemon Sword is exclusively getting an evolved form of Farfetch'd

Complete with its own lance and sword

There had been a lot of speculation surrounding a mysterious glitched image of an upcoming Pokemon. Being the dedicated people that they are, Pokemon fans worked out that this would be an evolved form of Farfetch'd – one of the original 151 Pokemon. It turns out they were right.

Sirfetch'd will be available exclusively to Pokemon Sword, so that means if you plan on picking up Shield you'll have to trade for the new knight form of the leek wielding bird. The newly announced evolution of Farfetch'd comes equipped with a leek lance and shield. It's also ditched its old colour scheme, becoming completely white.

It has a perpetually smug look about it as well, possibly because it's the only Pokemon that's received a knighthood so far. This continues the incredibly British theme that a lot of the new Pokemon have so far such as Weezing becoming a floating reference to the Industrial Revolution and Polteageist being a ghost that resides in a teapot. 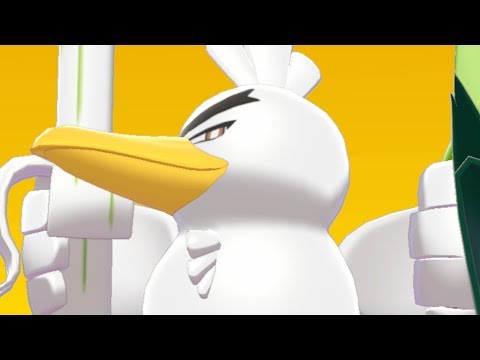 Sirfetch'd will come with its own signature move called Meteor Assault. It's apparently an incredibly powerful attack that will require Sirfetch'd to take the next turn off in order to recover. It's also changed typing from Normal/Flying to be a purely Fighting type, meaning that'll now be weak to one of its former types upon evolving.

It will also come with the ability Steadfast. This causes a Pokemon's speed to increase each time it is made to flinch. It's not an ability I've ever found all that useful personally, but I'm hardly the best at Pokemon tactics.

It marks the second time an older Pokemon has received a direct evolution since X and Y, with the first being Obstagoon. Before now there's only been mega evolutions and regional variants for them instead of making new evolutions for older Pokes.

Pokemon Sword and Shield will be heading to Nintendo Switch on November 15th.