I really like solo, card-based dungeon crawlers, so Knights of the Card Table was always going to be up my street. It sits somewhere in the middle of the genre, with less depth that the likes of Card Quest, but way more than Mind Cards and its ilk.

There are some really nice ideas here, and an interesting art style that manages to look slick and sketchy at the same time. It's not perfect, and there's certainly room for improvement, but for the most part you're going to enjoy the time you spend killing spider kings and drinking milk in this one.

You're playing an adventurer. You've got a weapon, a health meter, and later on in the game a shield. You need to navigate a series of cards that represent monsters, spells, health potions, and more. Cards are dealt out to you at random, but you can pick the order you deal with them in.

Got four monsters followed by a fireball spell? Tap the spell first and it'll damage all of the creatures, giving you an advantage when it's time to fight. Scraps are instigated with taps, and then you'll roll the attack dice of the weapon you've got equipped. Roll enough to kill and the card is cleared, roll under it and you'll take some damage and have to have another swing.

Milk can boost your attack rating, and different weapons have different dice. You'll unlock a sword and a mace, but while they offer higher potential numbers than the four-sided dice you start with, they also have starting values in the minus. Roll a 2 or under when you're on -2 attack and you'll take a beating. 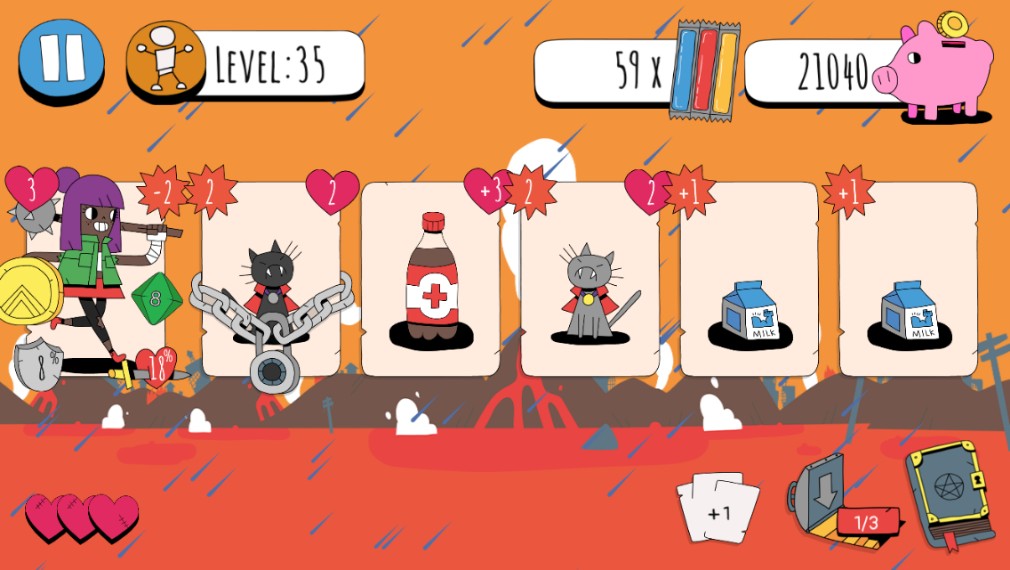 Interestingly you can swap your weapons on the fly. Boost up your attack score to negate the negative attributes, smash a foe with one of your big weapons, then swap out to your weaker weapons to take down smaller enemies.

You also get bonuses for rolling three of the same number in a row. Rolling three ones will leave you reeling, but it'll also give you a free heal. Roll multiple 3s and you'll upgrade your third attack. It's a smart idea, and it means the randomness of the rolls isn't as crushing as it might be.

Then there are bonuses for clearing three of the same cards in a row. You might get a more powerful boost, toughen up your next attack, or just add to the stash of gold you use to unlock new levels and buy weapons. Don't worry though, this isn't a free to play game, and you've always got more than enough cash to move on.

Everything about Knights of the Card Table is designed to keep you entertained. It's just the right amount of challenging, and there's just enough going on in the background that you'll want to jump back in to get that next weapon or discover the game's newest idea.

Some people will find the pace a little on the slow side, and if you're a fan of action you're definitely going to find this one a little lacking. But if you understand what you're getting into, which hopefully this review has shown you, you're in for a treat.

Knights of the Card Table

A bright, smart card crawl that will keep you entertained for hours
By Harry Slater
| Feb 14, 2019 |
iOS
Find out more about Knights of the Card Table
SEE COMMENTS