Trigger Fist: GOAT review "A multiplayer shooter that hasn't moved with the crowd"

A couple of years ago we didn't expect so much from our mobile shooters. It was a time before Fortnite and PUBG Mobile, a time before Shadowgun Legends; a time when we were happy just to murder each other from the comfort of our phones. But the genre has moved on, and while Trigger Fist: GOAT has some interesting ideas, the series hasn't kept pace with the rest of the world.

That's not to say there isn't fun to be had here. It's a really well put together game, for the most part, and the action is just about slick enough that things get tense from time to time. But the presentation is a little off, the violence is sometimes frustrating, and in the end there are just better games out there to pass your time with.

Greatest of all time?

The game is an online shooter that sees you teaming up either with other players or bots to shoot the faces off your opponents. There are the usual multiplayer modes here, from a free-for-all deathmatch to a carry the goat mode that borrows its ideas from a host of other games.

Everything here is solid enough, but nowadays solid isn't really good enough. Your boots crunch almost comedicaly as you walk around, and there's no real feedback when you die. Sometimes you just drop dead, and the game says a grenade killed you even there was no visible sign.

Trigger Fist: GOAT's problems are never huge, but there's so many little niggles here that everything you start enjoying yourself it seems like something else creeps up into your peripheral vision to start annoying you. 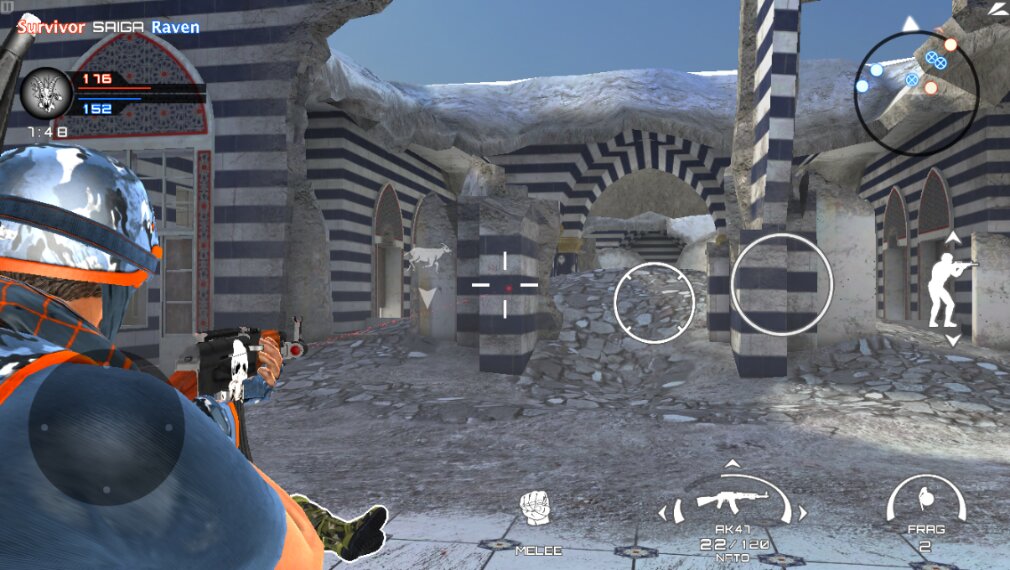 One thing that does deserve praise here is the control system. There are a good deal of buttons on the screen, but they're positioned really well, and when you do die it's very rare that you're going to blame the buttons. You might blame the world, when you wander into a bit of scenery and get lost, but that's a very different thing.

There's a decent balance here too, when things are going well. None of the matches I played ended in massive losses or huge victories - there was something to fight for right to the last second, which is always a bonus in games like this.

While certain aspects of the core of Trigger Fist: GOAT are certainly well worth talking about, the overall presentation falls flat. The menus in particular are garish, confusing, and lead to far more frustration than they should.

On the one hand then, Trigger Fist: GOAT is an entertaining, pared back shooter that rolls along with a decent rhythm. It's confusing and annoying sometimes, but the chunky violence more often than not puts a smile on your face.

On the other hand though, this is a game that can't keep up with the real heavyweights of the genre. It doesn't have the laser focus of the narrowing playfield in battle royale games, or the meaty progression that makes the likes of Shadowgun: Legends so compelling.

Two years ago, this would be a game we'd be singing the praises of. But the mobile gaming world has moved on, and we expect more from our portable digital entertainment nowadays. Trigger Fist: GOAT is a blast from the past, but all it does is manage to remind you of how much better we have it now.

How to play as Piranha Plant in Super Smash Bros. Ultimate