By Harry Slater
| Jan 29, 2019
iOS + Android
|
BackFire
Get BackFire on...
Find out more about BackFire
Available on: iOS + Android

One of my favourite things about the brilliant Downwell is how it lets you discover its deeper intricacies for yourself. You can play it like any other game, but doing that won't give you the full breadth and depth of the experience that's been created for you. BackFire fits into a similar category.

For your first few runs you're not going to see the real glory of the game - that only turns up once you've learned the basics of tapping to shoot and move. Once that concept is lodged in your skull, BackFire expands on it in a whole bunch of intriguing directions.

Some premium shooters feel like tweaked free to play games, but that isn't the case here. BackFire is slick, smart, and it doesn't give a toss about the rules that you think it should be following.

Back to back they faced each other

As you might be able to tell from the name, the ship you're piloting here blasts out danger from its rear end. I say ship, it's actually some sort of magic, digital exorcist who's been tasked with killing a whole bunch of demons. And I do mean a whole bunch.

To begin with you tap to move, darting to the direction of your finger as soon as you've tapped. When you're moving you're blasting laser beams out of your behind, and you need to use them to kill the creatures that are literally coming out of the blobby pink walls.

You need to play smart, moving quickly and avoiding the attentions of the gaping maws of the evil beasts. If they get their teeth into you, you stop moving. Mash the screen and you'll escape, but the more monstrosities that latch onto you, the more button bashing it's going to take to get away. 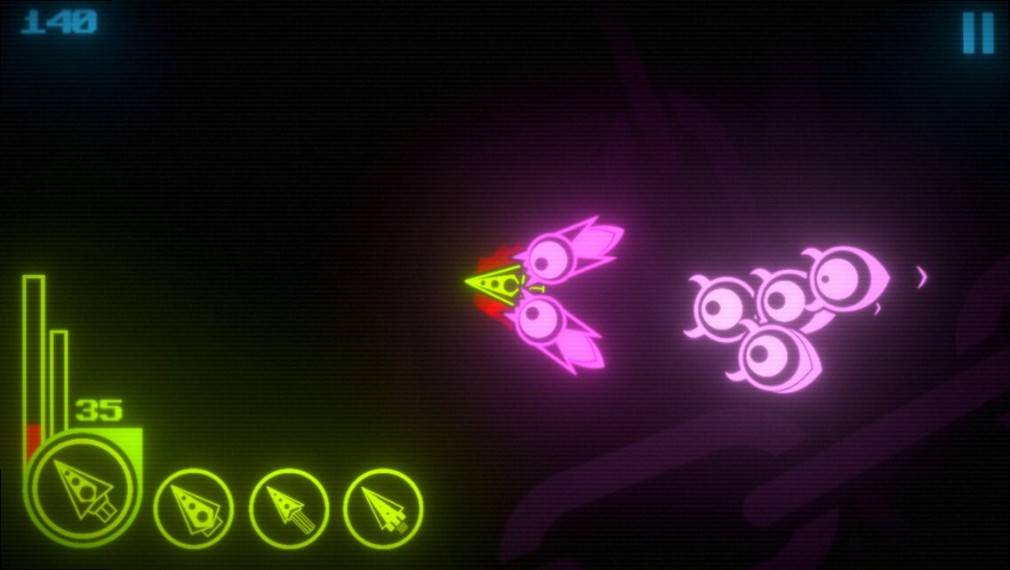 You earn coins while you're killing, and you can spend these on different styles of upgrades for your death machine. You can have four weapons equipped, swapping between them to deal out the digital vengeance you're seeking.

Different weapons control differently though - some of them you need to be still to move, others only fire out a single blast in the direction your backend is facing for each tap. You need to combine the different weapons to take down big groups, and eventually massive bosses.

There's no escaping the fact that BackFire is a difficult game. But it doesn't revel in your tragic mistakes - instead it gives you a bunch of coins and tells you to pull your socks up, get some bigger guns, and try again.

Drew their swords and shot each other

And the fact of the matter is that you are going to try again. The progression here is balanced so that every step you take along BackFire's road earns you something new. It might just be that the next time you play you're a little bit stronger, but in turn that means you're going to earn more and be able to get the next upgrade you've got your eyes on.

Legrand Legacy is a Switch JRPG that makes absolutely no sense