Were we to review games here at Pocket Gamer on their ambition alone, VAST would probably get a Platinum Award. We'd also get shouted at way more in the comments than we do now, so it's not something we're going to implement.

And in any case, that top mark would be wasted on VAST. Sure, it's a game that tries to be something extra special, throwing together a premium FPS adventure experience with a solid art style and a vast amount of content.

But some of the worst controls we've seen for a long while mean that the main takeaway you get from this one, other than the 15 quid dent to your wallet, is going to be something not unlike sea-sickness.

Sick it to me

The game starts with you stumbling out of a pod, Halo-style. There's some story, then you start to wander around the vast, echoing confines of your ship to try and find out what's going on. Or at least that's what you're supposed to do.

After about twenty minutes of walking into things, walking off of things, and suddenly spinning around while looking at the ceiling, the enemies first pop up. By now you're already fully aware that this is a broken game, and that no amount of alien baddies is going to change that. And it doesn't.

You can't aim and shoot at the same time, since the look stick is right next to the button you use to fire your weapon. Instead you end up combining strafing and shooting in an ineffectual and far from entertaining slog-fest. It won't be long before death is a comforting release. 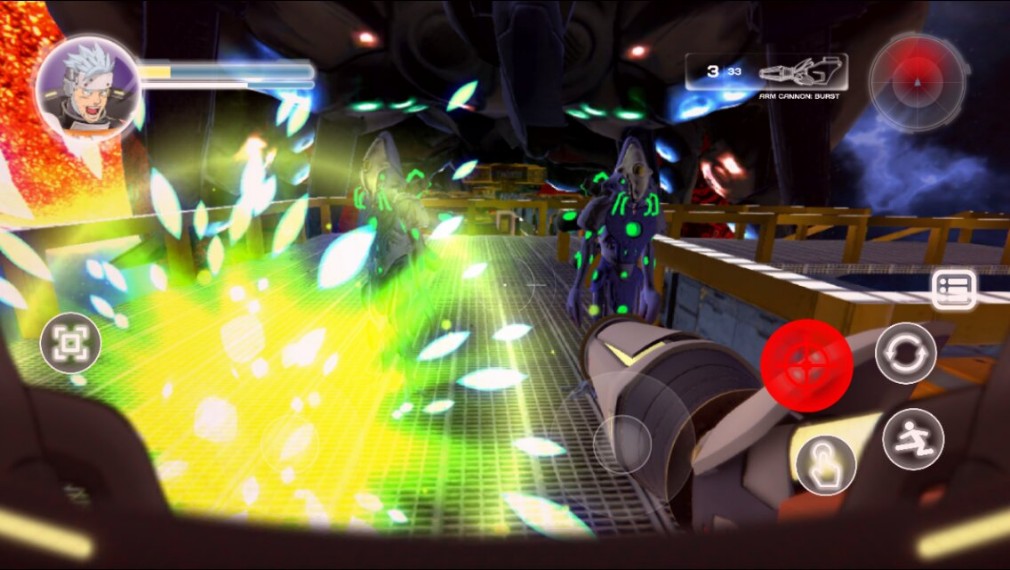 When it comes to style, VAST borrows from a vast number of sources. There are shades of Half-Life, Quake, and Metroid Prime here. And those shades act to remind you of what you could be doing instead of wasting your time with this. Reminding players of what they're missing out on is never a great design idea.

For all that's wrong with VAST, namely the controls that make it all but unplayable, there's a part of me that wanted it to be something special. It's a weird sort of game, more like a first person action RPG than a shooter, and there's clearly been a vast amount of work put into trying to get the game to work.

But the sad fact is that it doesn't. This is a prime example of a game built without the understanding of mobile control that action games need. Stick all the controls in a jumble at the bottom, and make them so sensitive that sometimes turning a corner flips you 360, and while you might be staying true to your influences, you're ensuring no one's going to enjoy the experience.

VAST is almost a lesson in how not to do a mobile shooter. The shooting is poor, the exploration is draining, and the lack of subtitles means you're going to miss pretty much anything that's said unless you've got headphones in. It's almost like it's following a checklist designed to annoy.

Anyone playing with a controller can add a couple of points to the score, since the main problem here is the confused and geriatric touchscreen buttons, but even then the width of the game's aspirations are choked by the narrowness of its play. There's a rigidity here when there should be a smooth flow, and a floppiness when the action demands tautness.

In the end, no matter how you play, VAST doesn't offer up enough fun. It's not worth the money, or the time. This is a game with ideas above its station, and while we're never going to punish anyone for dreaming big, VAST loses its own identity in its big plans.

Even without the poor controls, there just isn't enough excitement in VAST to make it anywhere close to worth the price
By Harry Slater
| Jan 11, 2019 |
iOS
Find out more about Vast - Pocket Edition
SEE COMMENTS