If your game offers a joyful sense of momentum and a mounting tension during play, then know that I'll be all over it. It's why I'd place Ojiro Fumoto's Downwell among my favourite ever platformers. It's also why I found the original Nidhogg, released back in 2014, to be an often conflicting experience.

The stop/start nature of that original game's extended tug-of-war progression frequently grew stale during extended matches. I remember wishing there was something else forcing players onwards to keep rounds snappy. And, disappointingly, Nidhogg 2 does little to rectify this. 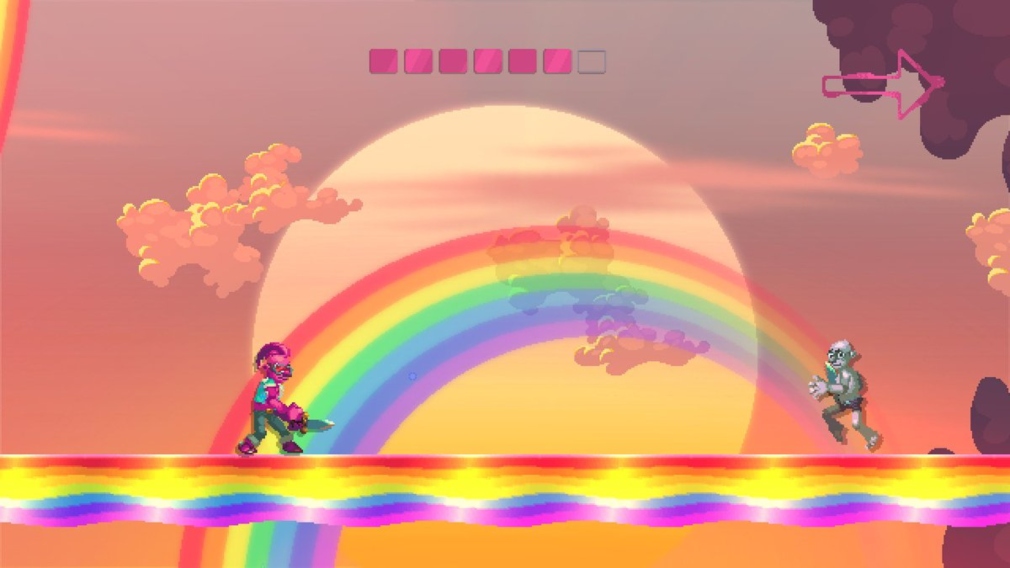 Two-player combat as depicted here revolves around stabbing, parrying, and disarming your opponent, with some sword-chucking thrown in for good measure. It's typically more about small gestures than full-on assaults, which makes for some genuinely intense standoffs.

Though rather than striving to perfect this initial template, Messhof Games' follow-up attempts to justify the 2 in its title by adding a few new weapons, and – controversially – casting out the original's minimalist aesthetic in favour of something altogether different.

Thankfully, "different" is neither inherently good nor bad, and I found the new art style to be suitably fleshy, gross, and garish. The character models have a tacky look to them that still manages to be oddly appealing, like they're some twisted takes on Aardman's Morph.

Nidhogg 2's violence is equal parts ridiculous and repellent, an effect that sits well with these baseline aesthetic choices. And it's all backed up by a thumping, bass-heavy soundtrack that further enhances this oddball marriage of the brutal and the quirky. In terms of this new artistic direction, I have few complaints.

At its core, this is still the same game of patient standoffs punctuated by frantic cat-and-mouse chases. Though, in addition to the more obvious changes, the sequel does come bearing a few fresh gameplay ideas.

The new selection of weapons – a broadsword, bow, and dagger – helps shift the focus from pure survival to making sure you're in the optimal position for your weapon type. The bow, in particular, took some getting used to, but its implementation remains undercooked, ultimately presenting fewer opportunities for experimentation than the more up-close weapons. 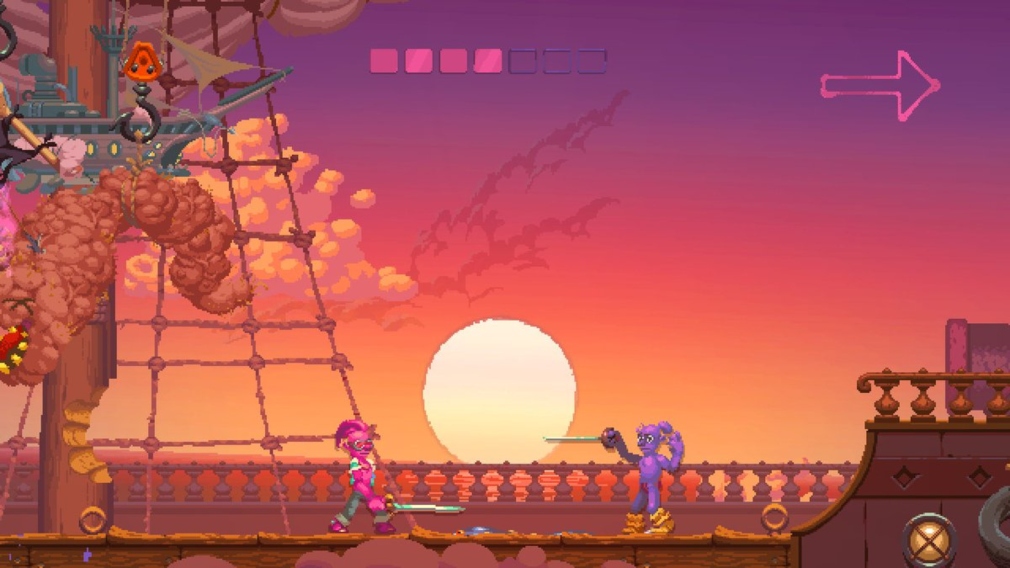 Even when factoring in the addition of the dagger, it's still not a great idea to get right up in your opponent's face. Throws and jump-kicks are still as viable a tactic as any, and unarmed fisticuffs – now fit with head-stomping – can be effective when all else fails. For sure, the combat soars on occasion, though I can't help but feel that there is still so much untapped potential within this premise.

A swing and a miss?

To throw a further spanner in the works, Nidhogg 2's single-player arcade offering is severely lacking. Enemy AI struggles to cope with even the most basic of cheese tactics, and so these stages can't offer sufficient practice for multiplayer.

The arcade mode is nice as a sort of guided tour through each of the themed levels, but it's never going to be a particularly compelling way to play. And, honestly, this puts a real damper on Messhof's attempts to offer a more complete experience.

Yes, the game inspires, at times, a sort of propulsive madness in its players. But for every one of those moments – the type where you forget entirely about the controller in your hands to become one with the bloodletting grunts on screen – are too few and far between.

As a result, Nidhogg 2 is a game of ethereal highs and thudding lows, with the balance too often veering towards the latter, especially whenever you go it alone. It's neither better nor worse than what came before, only somewhat different. An odd detour, then, rather than the assured leap forward that it could have been.

Nidhogg 2 is a game of ethereal highs and thudding lows, and those sporadic bursts of joy are best experienced with a friend by your side
By Cameron Bald
| Nov 26, 2018 |
Switch
Find out more about Nidhogg 2