Cat Lady - The Card Game review - "Collect cats with your friends, have fun"

Some video games talk to you on an existential level. For me, Cat Lady is definitely one of them. It's all about keeping as many cats as happy as you can. Technically you also get to play as an old lady, which isn't something that happens very often in the gaming world.

The theme is secondary here to the play though. Cat Lady sits somewhere between the super elite time-destroying games like Hearthstone and the simpler, condensed dungeon crawls typified by the likes of Mind Cards.

The game is played by two to four players. One of them is you, but the others can be AI or human controlled. There's no online play, so if you want to take on real people you're going to have to let them in the same room as you for a while.

Each round you take three cards from a set of nine. These represent cats, food, costumes, and a variety of other things that you need to understand. In simple terms you need to make sure you feed the cats you have and don't waste any food by picking up what you don't need.

There's also catnip and spray bottles to consider. Catnip can give you big points, but you'll need to collect a few bags of it to get them. Spray bottles let you clear a lock on a row or column of cards - without them you can't pick the same position as the last player to get your cards from. 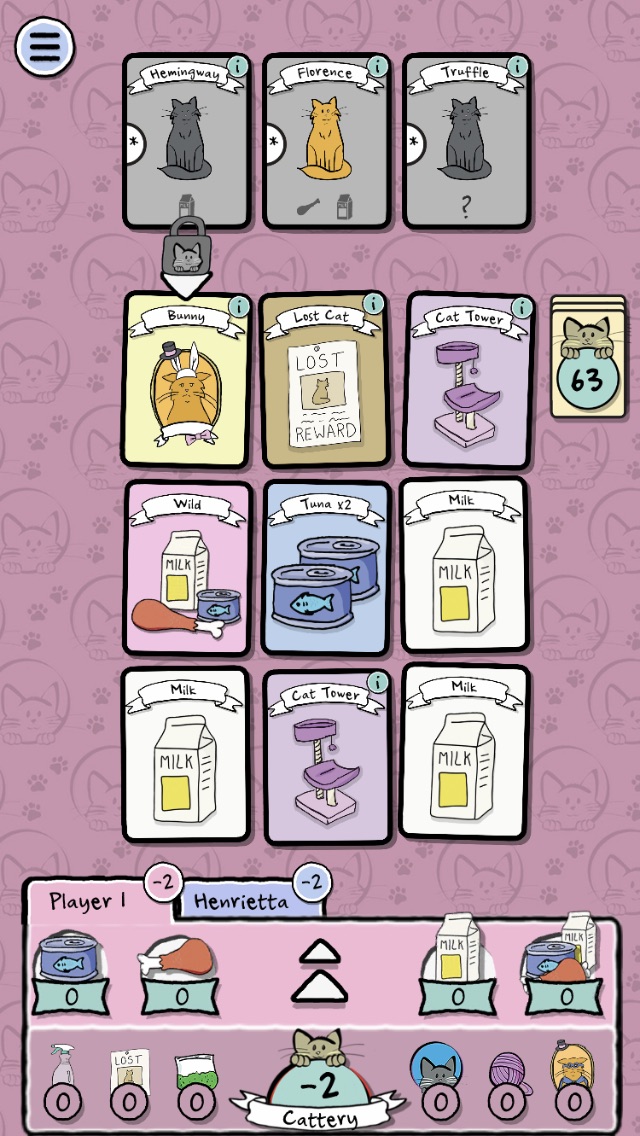 Every three cards that are taken are replaced from a deck at the side of the screen. When three cards are taken and there aren't enough left in the deck it's game over. Then you need to feed your cats and see how many points you've earned.

Playing with other people makes things far more interesting, as you might expect. You'll try and block their plans, pushing them to pick up cards they don't want or grabbing cards they do to keep their score as low as possible.

This isn't a super deep game, but there's a pop to it all the same. It's the sort of thing that would slide easily into game night rotation, mainly thanks to the pass-and-play option. It's not going to take up too much time either.

Cat Lady is a bright and smart card game that doesn't take forever to play. That means it lacks the depth of the big boys, but it also means that you don't have to learn that much to get to grips with it.

For a couple of quid it's a really good addition to any digital board game player's library. You won't play it much once the initial thrill has worn off, but having it ready to whip out when you've got some friends round makes it an easy recommendation.

Slydris 2 is finally on the way to iPhone and iPad

Yo! Let's Stretch is a slightly dull one-touch platformer that's out now for iPhone and iPad