By Harry Slater
| Nov 5, 2018
iOS
|
Blackmoor 2
Get Blackmoor 2 on...
Find out more about Blackmoor 2
Available on: iOS
Subscribe to Pocket Gamer on

If you're going to make a side-scrolling hack and slash platformer for mobile, you're going to have to make sure it's really good. There are loads of games that offer similar experiences on the go, so rehashing the same ground just isn't going to be good enough. Luckily, that's something Blackmoor 2 understands perfectly.

The game sees you picking a warrior, then making your way through a series of levels, murdering everything that moves, and quite a lot of things that don't. But there are more than enough fresh ideas here to make it an easy game to recommend.

It's fast, it's violent, and while it's not breaking any really new ground, the swagger it has more than makes up for that.

Once you've picked your character, you stomp out into the campaign. This isn't a one-time thing. You can play any level you've unlocked with any of the characters you've got. Don't like the warrior? Try something else.

Buttons along the bottom of the screen control your movement, attacks, and jumps. As you power-up the different characters you'll unlock special moves you can unleash. These appear on-screen when you've unlocked them, which does make things a little fiddly when you've got a full-power slugger and a small screen.

That's only a small niggle though, especially when the violence Blackmoor 2 offers up is so enticing. It's not a mindless button blatter, nor is it a more precise slaughterer like Grimvalor. It sits between those two poles, and it makes for a really engaging experience. 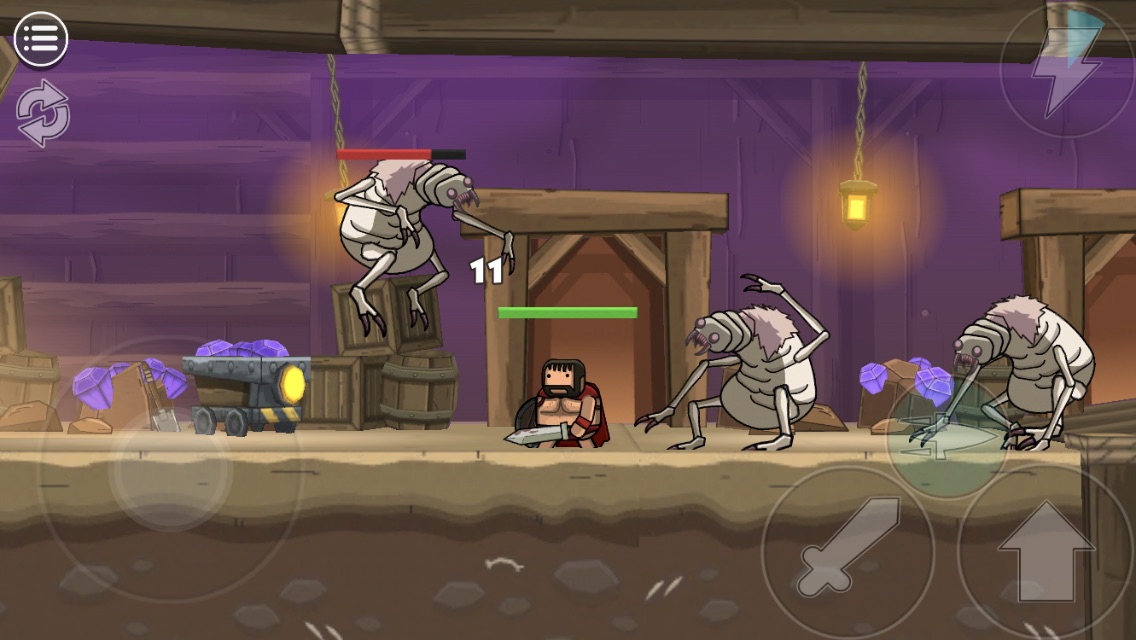 The game is structured in a way anyone who's played a platformer is going to understand. There's a hub world, and from there you can move to the campaign levels you've unlocked. There's way more going on here than just the story mode though.

There are user-created dungeons, as well as a level-editor that allows you to create your own. It's pretty easy to use as well, so you'll be able to build challenges for your friends and strangers to take on. There's multiplayer as well. Up to four players can join in on co-op.

One thing that really stands out in Blackmoor 2 is the sheer variety of enemies. There are skeletons, ratty thieves, giant ogres swinging deadly maces, and much more. Almost every level sees you facing off against some new foe, which means you're always learning new offensive and defensive tactics.

Blackmoor 2 knows what its players wants, and it sets out to give them as much of it as it possibly can. It's tricky when it needs to be, frantic when it wants to show off, and surprisingly smart for a game in a genre that's often described as mindless.

You're going to have fun, is what I'm trying to say. There's nothing here to change your mind about action platformers, but Blackmoor 2 is so lovingly well put together that you can look at it as a love letter to jumping, slashing, and boss fights.

Blackmoor 2 is a brilliantly put together hack and slasher, with enough good ideas to set it apart from the pack
By Harry Slater
| Nov 5, 2018 |
iOS
Find out more about Blackmoor 2

We're excited about Teslagrad coming to mobile, and we think you should be too