There are few things more elating in video games than the sharp crack of a rifle after the quiet, methodical build of tension that comes from slowly lining up the perfect shot. Clear Vision is a series that has absolutely got this sensation down pat.

Although, for me at least, the highlight of these games has always been the moments after you've pulled the trigger, where you finally get to see the often bawdy, always grisly result of your efforts. The same remains true of this fourth entry, which doubles down on these terrifically macabre moments.

As usual, you're a killer for hire who makes his money by lurking amongst the undesirables and reprobates of a world populated by blood-filled stick figures. These nasty fellas have some targets that need disposing of, and they reckon you're the best man for the job.

With your weapon of choice being a sniper rifle, your primary challenge, naturally, is compensating for distance and the occasionally tricky external factor such as wind. Sure enough, some further complications are eventually introduced, but that's about the long and short of what you'll be doing, and have always done, in Clear Vision.

Contracts aren't typically as simple as just sending your victim's brain matter to the moon. Sometimes you'll need to create environmental "accidents", such as shooting the fuel tank on a barbecue, that often result in some pretty nasty sights.

Quite what these seemingly random folk have done to warrant such a miserable demise is anyone's guess.

Though, even when missions do become more complex, the game still doesn't offer much of a challenge, especially if you've already played the earlier entries or plan to invest in some of the premium currency, which can be used to nab upgrades and better weapons. 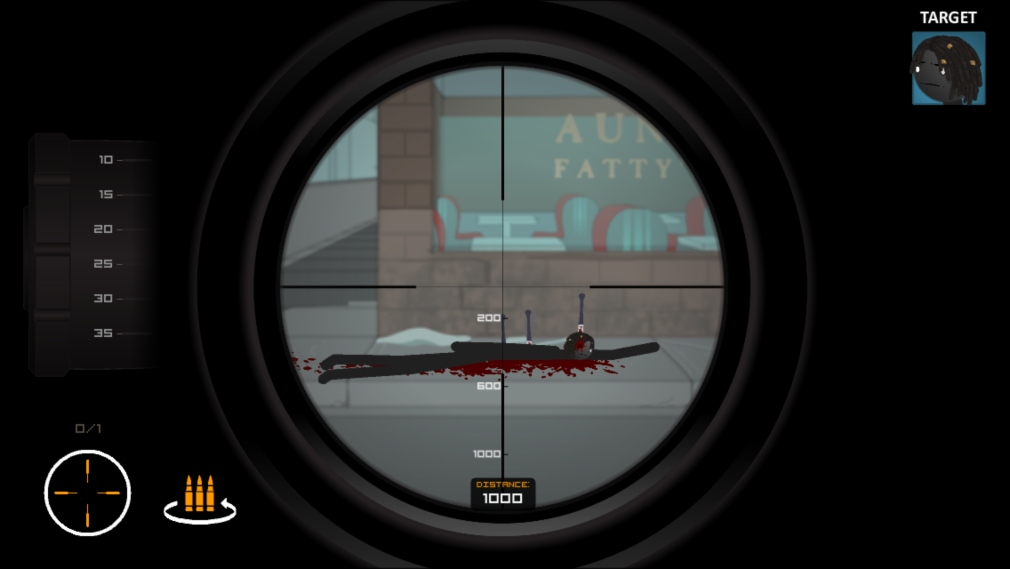 On the one hand, the fact that I never felt forced to spend any actual money is commendable, but the resulting lack of difficulty means that you'll likely rattle through the game in no time at all.

And besides the upcoming daily challenges, there are precious few reasons to return to Clear Vision 4 once you've completed its all-too-brief missions.

With that being said, the biggest problem here is the lack of evolution between games. There are very few surprises in store for returning players, with us having seen most of these types of missions multiple times before.

Likewise, the series' trademark sense of humour needs to expand beyond the ridiculous death animations and the odd expletive if it wants to remain at all funny. After all, repeating jokes is a sure-fire way to rapidly turn chuckles into eye rolls.

I could maybe appreciate the softly-softly approach if this were, say, the second entry in the series – but it's not, it's the fourth, and it still feels like we're stuck on Clear Vision 1.5.

For sure, you can have some shock-value fun with this one, but the few things that the game does well are simply not enough to make up for its overly simplistic nature and total reliance on an increasingly tired formula.

Clear Vision 4 offers an ok time for a short time, but it's by no means essential or even markedly better than its predecessors
By Cameron Bald
| Nov 9, 2018 |
iOS + Android
Find out more about Clear Vision 4

Hyperdrome is a frantic mash-up of a card game and a racer that's out now for iPhone, iPad, and Android