The secret at the heart of upcoming platformer The Flute

Hands on with an unusually musical indie game

Platformers remain a firm favourite with gamers. But we recently played one with an unusual twist.

Developers Opusludus were demonstrating The Flute at Pocket Gamer Connects (our event for developers in Helsinki last week). We got a chance to play it, and even make suggestions.

You play as Tamino, a Japanese-themed archer, on a quest to rescue Princess Pamina from a demon. In the brief area we explored, we ran through caves, flipping switches to open new areas; we tapped to fling arrows at creatures such as spiders before they took us down; and at the end of the first level, we were attacked by a powerful serpent.

If you're the cultured type, this may sound familiar to you. It's the plot of Mozart's opera The Magic Flute.

"It is a first of its kind: a computer, mobile, electronic game following the actual plot and music of the opera, revealing and 'teaching' the story as the game moves forward," promise the developers.

During the game's six stages, you'll take control of four different characters, each with a unique ability. In their company you'll uncover the world of Mozart's masterpiece. 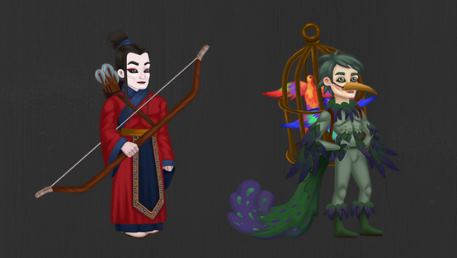 The developers are keen that the game is seen in its own right as a fun platformer. But the musical influence is there in the soundtrack as well as the story – the soaring opera score fits perfectly with the gameplay. You can hear some of the music right now on the official website.

They hit on the idea of making this game back in 2014. "It took us a while to tackle the complexities of opera and merge it with gaming," reveals the official website. "But we believe our persistence is producing some exciting results!"

The prototype came together, and the music was specially reworked, in 2015. Now the game is playable and it was revealed to attendees at PG Connects Helsinki on 11-12 September.

Who knows? The Flute could secretly introduce a new generation to 18th century music.

So it's definitely one of the more intriguing games we played. Add it to your watchlist and look out for more details in a few months' time. More will no doubt be revealed at Pocket Gamer Connects London, our next big industry event, at the start of 2019.

If you're an indie developer with a title in the works that you'd like to show Pocket Gamer, why not sign up for one of our Big Indie Pitches? Better yet, there's still time to enter the 2018 Big Indie Awards, and maybe win a trip to the huge Asian G-STAR festival.
SEE COMMENTS

PGC London 19: The Flute is a game about discovering some of the best music in the world