Can we forgive Epic's sins of omission?

By Jon Jordan
| Aug 13, 2018
Android + iOS
|
Fortnite Battle Royale
Welcome to the latest in our series of Pocket Gamer columns. We're taking the best games writers in the industry and giving them a platform. Veteran journalist Jon Jordan is here each week examining the trends shaping your mobile games scene. This week, he's considering the security implications of Fortnite's Android release.

Last week, I mused on the disingenuous nature of Tim Sweeney's assault on Google Play Store’s 30 percent margin, while happily accepting Apple's similar cut because he has to.

But in the seven days since, the argument has moved on.

Now the thrust concerns the indirect (and potentially direct) outcomes of Epic's decision not to release Fortnite through Android's official app store.

Instead, by funneling interested users to its own website, Epic stands accused of opening the door for malware to thrive.

The logic is fairly simple. If Fortnite has been released via the Play Store, Android users would have their usual single, centralised, and trusted source by which to download the game.

By not doing so, Epic has created a massive void that companies both opportunistic - to promote their own games - or malevolent - to steal your data - will fill.

Indeed, as widely reported, Fortnite has become the first game the Play Store is highlighting it doesn't host - ironically in the process pointing out that Battle Breakers, the mobile game Epic’s Chair Entertainment was working on, still hasn’t been released. (Nor is it now ever likely to see the light of day.) 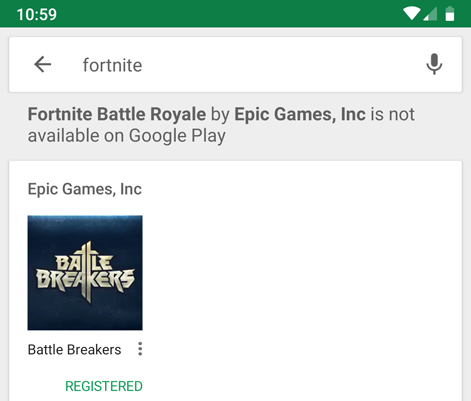 Am I my brother's keeper?

Of course, Epic's defence will be that it's not responsible for the mistakes of others. It's been clear there are only two sources to download Fortnite on mobile - the Apple App Store and the Epic website - and that it's actively taking steps to inform consumers of the fact.

For example it's spending ad money through Google to ensure searches for "Fortnite Android" return its website.

Whether this is enough for it to be forgiven in the court of public opinion for what we might now quaintly label sins of omission remains to be seen.

Personally, I've little doubt US consumer law being what it is, the legality of this indirect weakening of online security will be tested in the courts sooner rather than later. 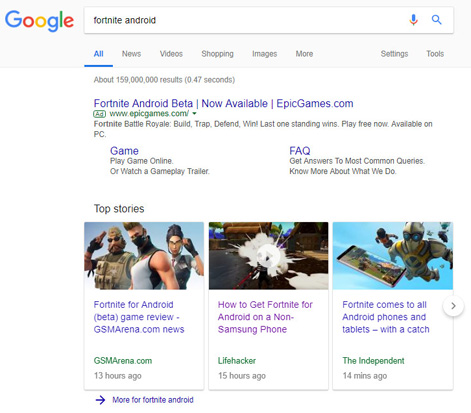 You could imagine how the case would develop. A very rich technology company weakens the online security of its would-be users - whether directly or indirectly - so it can make more money.

Is the stable door locked?

Because Fortnite isn't available through the Play Store, getting it downloaded to your phone requires users to switch on the Install Unknown Apps setting. Given I don't have a Samsung device, I don't know how Epic's Fortnite installer works. Hopefully it switches on Install Unknown Apps to install Fortnite and then switches it back when it's finished, or at least prompts users to follow this flow.

Indeed, this is such a vital part of personal online security for Android devices it's almost impossible to think Epic wouldn't have nailed this down tight. If not, there will be a direct link between its decision to bypass the Play store and weakening its consumers' online security.

It's certainly an interesting area of debate, but not one I expected to be writing about in such length in a column about the mobile games industry.

Despite all the talk about their 'parasitic 30 percent cut', perhaps Epic is finding out that Apple and Google do provide some important additional services after all.