Get a behind-the-scenes look at TerraGenesis

Where it all began

Big things are in store for TerraGenesis, Edgeworks Entertainment’s vast space colonization and terraforming sim. The game arrived on Android last month, and fans will gain access to a generous batch of new content in May when the game’s Historical Earths update drops.

If you haven’t given the game a try yet (and we really encourage you to do so), TerraGenesis sends you out into the solar system to turn Earth’s neighboring planets into habitable worlds for a bright-eyed bunch of colonists. You’ll tackle biological and physical challenges to transform the spheres to your will.

TerraGenesis is an ambitious project with a fascinating story. We had the chance to chat with Alexander Winn, founder of Edgeworks about the design process and what the future looks like for TerraGenesis.

What do you think TerraGenesis offers that you can’t get from any other mobile title?

The biggest thing is terraforming: lots of sci-fi games have a terraforming mechanic, but it’s just a switch you can flip. “Turn this moon into a jungle, costs 500 Gold and takes 1 hour.” To me, that seemed like such a waste! Transforming a planet is an intricate balancing act, where dozens of things can go wrong and it takes skill and patience to make it work properly. And a system that requires skill and patience to achieve an exciting end result, sounds like a game mechanic to me.

The other thing TerraGenesis does that I’d love to see more games emulate is its use of real science. As much fun as it is to colonize “Grandathor, Tenth Moon of Rentarion!!!”, I’m much more interested in colonizing Mars. And not just pseudo-Mars, with a randomized red landscape, but actual Mars with the proper surface features and starting stats, etc. Real outer space is so full of beauty and mystery and danger and excitement, it’s just silly to fictionalize it all in every game. 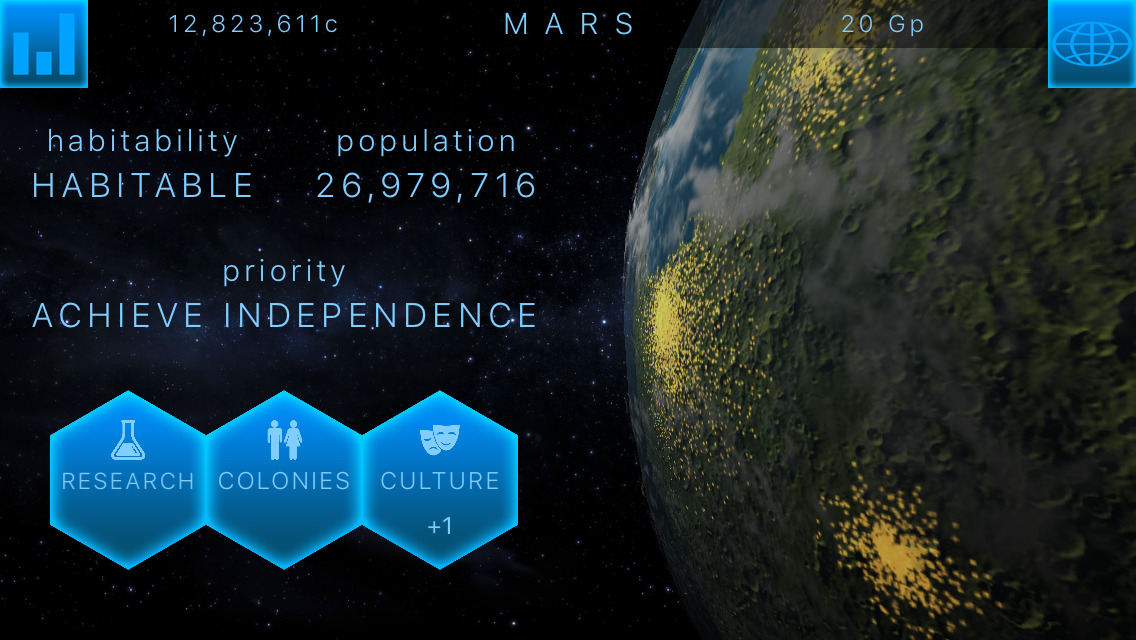 What were your expectations for TerraGenesis when you initially pitched it at Pocket Gamer's Very Big Indie Pitch last year?

I knew we had something special, it was just a matter of demonstrating it properly. Five minutes can be an eternity, but it can also be the blink of an eye if you need to convey a lot of information AND leave time for questions. Plus, on top of everything, I was sick that week with a sore throat and a very fuzzy brain.

So I suppose my expectations were “I really hope I don’t mess this up!"

So it's safe to say that you passed your expectations?

Well I didn’t mess it up! Hahaha. But yeah, the whole experience was so amazing. It was great just to get the opportunity to pitch the game repeatedly like that, to really hone my description of the game and what makes it appealing. And in the end, winning was such a fantastic feeling! We got a ton of great exposure, and I’ve kept my commemorative bat close to my desk ever since.

What were the biggest challenges faced during development?
The single biggest obstacle I faced was optimizing for all the different devices my users were playing on. TerraGenesis is pretty rough on a device’s battery and processor, trying to render those worlds in near-photorealistic detail. I was a one-man indie developer, so trying to keep up with all the different device capabilities (even in Apple’s super-controlled ecosystem) was pretty daunting. I finally got it under control after a while, but I’m currently wrestling with it again as we bring TerraGenesis to Android, where the device capabilities vary much more widely and there are thousands of devices in common use around the world. 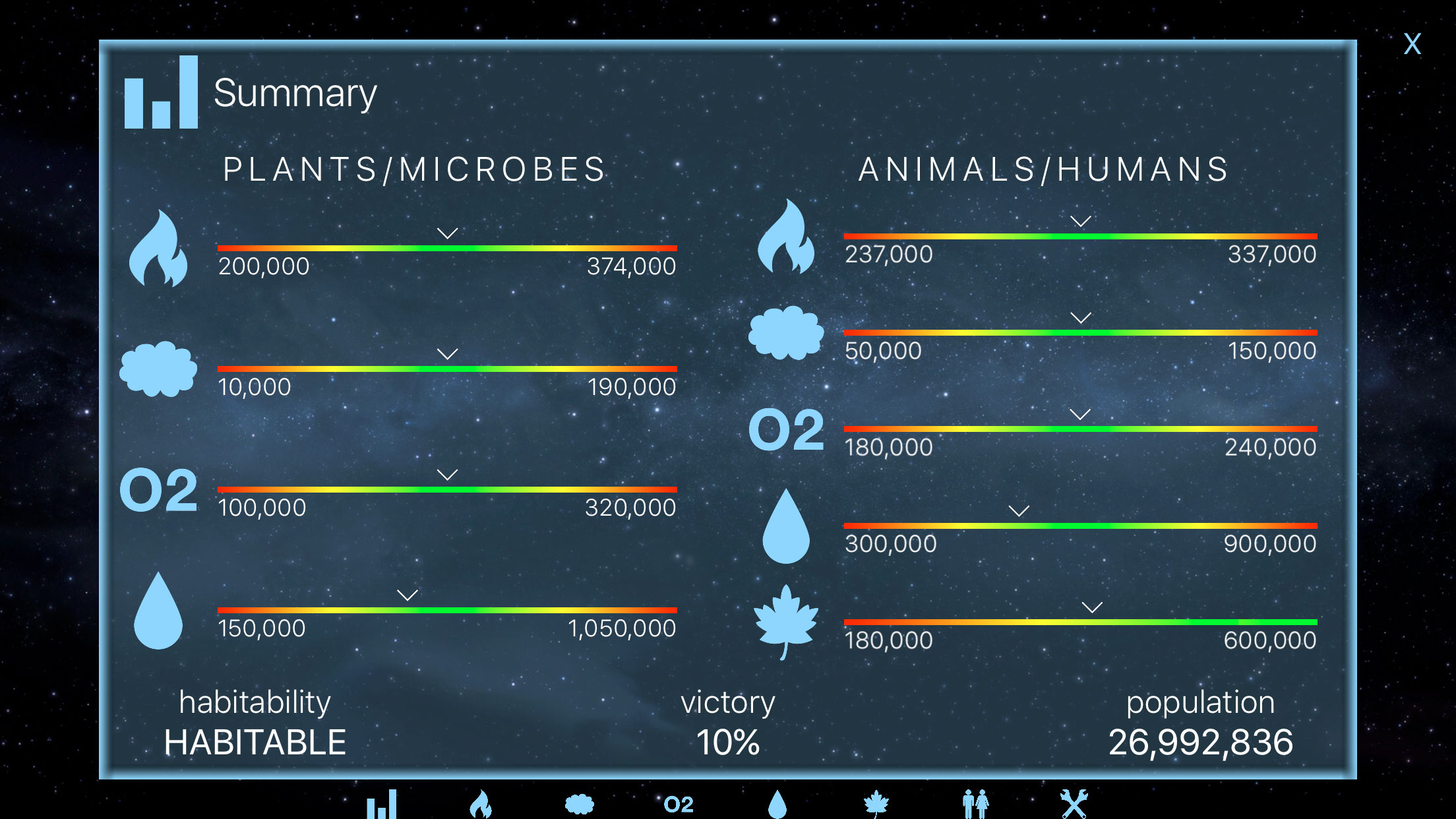 Which part of TerraGenesis are you personally the most proud of and why?

The Biosphere. As tricky as it was to design the core game with its transformation of entire planets, the Biosphere was infinitely tougher. Trying to simulate an interconnected ecosystem across millions of potential player-designed species, and have it run in real-time, was a months-long process. But in the end, I think I came up with a system that balances complexity and ease of understanding surprisingly well, and I’ve even had several teachers tell me they use the game in their classes to illustrate biodiversity and food chains to their students!

How has fan reception been so far towards TerraGenesis, and have any suggestions made it into the game?

The fan reception has been incredible. Seriously, overwhelming and amazing. We’ve got a huge fanbase on iOS, active communities on many different social media platforms, and we just released on Android so we’re seeing a surge of popularity there too. I’m so grateful to the fans who have supported us, and who have helped spread the word. It’s because of them that we’ve gone from a single developer working in the evenings and weekends to an indie studio of four people working full-time on the game. No joke, it’s changed my life.

And yeah, we actually have fan suggestions that make it into almost every update! Whether it’s a minor bug report or a major feature concept, we keep a list of every fan suggestion we receive. We’ve even opened up a system called the Edgeworks Beta Program to our Patreon supporters, where you can get early versions of every update on iOS and Android and help us bust bugs and improve the game for everyone. We’ve seen a lot of interest already, it’s been really awesome!
Do you have anything planned in terms of future updates for the game and, if so, can you give us any details of what these might include?

Right now we’re in the middle of rolling out and supporting the Android version of the app. After that we’re going to be consolidating the code across both iOS and Android, and then we’re moving onto TerraGenesis 5.0! That’s our next big release, which we announced back on Edgeworks Entertainment’s anniversary on February 9th.

TerraGenesis 5.0 is going to include a new world bundle called Historical Earths, which will let you play on various eras of our own planet’s history, from the Ice Ages to the Age of the Dinosaurs and beyond. We’re also going to be introducing a new game mechanic called Worldkillers, where players will be able to stop killer asteroids and other global threats, and a new system called Natives, where players will be able to wrestle with the moral implications of colonizing a world that already has an indigenous population.

What will be the first mobile game to hit $10 billion in sales?

4 out-of-this-world updates coming to TerraGenesis this May

TerraGenesis Guide: How to make the galaxy your own

Terraform alien worlds in TerraGenesis, out now on Android