Welcome to the latest in our series of Pocket Gamer columns. We're taking the best games writers in the industry and giving them a platform. Veteran journalist Jon Jordan is here each week examining the trends shaping your mobile games scene. Today he's pondering the power of big screen franchises. I don’t consider myself a Star Wars or a superhero fan and I’ve never seen an episode of The Walking Dead.

Nevertheless, three of the mobile games I play the most are Star Wars: Galaxy of Heroes, Marvel: Strike Force (currently in soft launch), and The Walking Dead: March To War.

I guess what I’m trying to say is licences aren’t the most important thing for me when it comes to mobile games, but they seem to encourage me to play for longer than I otherwise might.

One-eyed man with the blind

In the case of The Walking Dead, the reason why isn’t clear as my knowledge of the series extends as far as knowing it involves zombies and survivors, and some important characters are called Rick, Negan, and Michonne.

Maybe - like the reported psychology for the male peacock’s tail - these games are better than average because the developer has access to enough spare resources to buy an expensive licence for their game.

My knowledge of superheroes is stronger (skewed more DC than Marvel), but, again, not much beyond what you’d learn in the first 30 minutes of a lecture entitled "An Introduction to Mutants Wearing Underpants Over Their Pants".

Yet this general ignorance hasn’t stopped me getting into Marvel: Strike Force, despite not knowing if S.T.R.I.K.E. or Hydra are the good guys, or what Kree has to do with anything.

As with all good RPGs, I’m making tough decisions about who to max out, as well as which missions to grind on to get the shards required to unlock new characters (for the record, Electra and any mission involving Gamora shards).

Only in the case of Galaxy of Heroes can I say that my youthful enthusiasm for the first three Star Wars films actively shaped my determination to keep playing. Of course, it goes without saying that licence or not, it’s an excellent game but after a couple of months, I felt overwhelmed by the available options and decided to start the game again, this time just playing with Light Side characters.

The reason I’m still playing two years on is purely because I ended up joining a good guild, but creating my own metagame within the wider metagame was what got me to that point.

And compared to the other mobile games I play, this is where licensed games really earn their royalty payments.

I may have no inkling who Aalya Secura or Luminara Unduli are but if they’re in a squad with Princess Leia and Admiral Ackbar it doesn’t matter. It’s the same with Quake and Luke Cage fighting alongside Spider-Man and Punisher in Marvel: Strike Force. 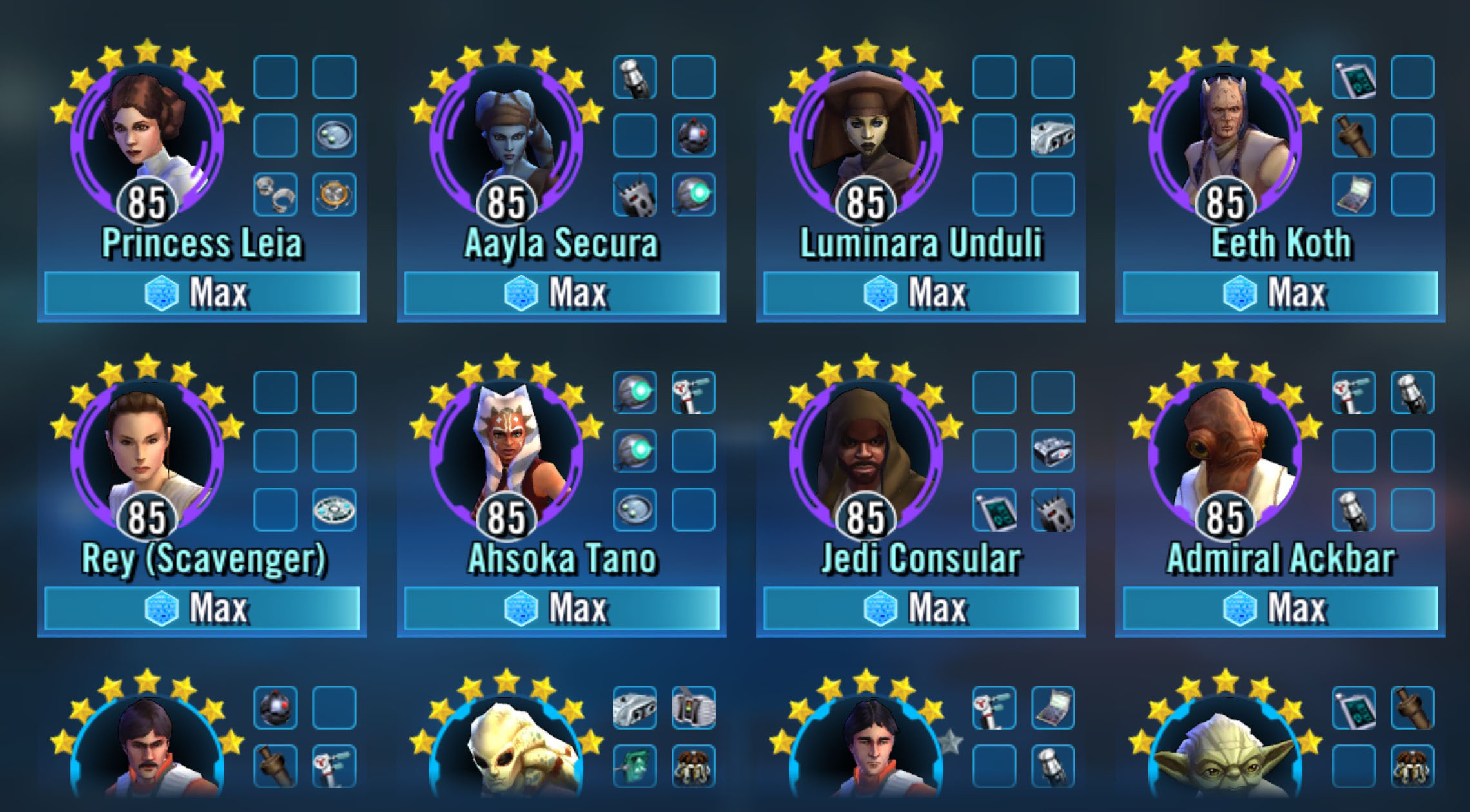 Players only need the smallest inkling of a setting to roughly work out what’s going on and start setting the pieces in place in their own mind, however haphazardly.

Conversely, when it comes to similar squad RPGs I’m playing such as Lionheart: Dark Moon and Ragnarok Rush, I have literally zero understanding of the world set up, especially as I skipped the intro movies. That makes it difficult to know anything about what’s going on. I have to think about the most basic interactions, and that makes the games less fun.

So, on that basis, even my cursory knowledge of The Walking Dead is an advantage, not because I know anything about its backstory or plot details, but because I know there is a TV show and a graphic novel series called The Walking Dead. That means the game probably has some sort of internal logic and ongoing interesting character interaction smart people have thought about.

I could delete Lionheart: Dark Moon and Ragnarok Rush today, forget about them overnight, and never be reminded of them again, even though, in their own ways, they are pretty enjoyable.

It’s the opposite for the Star Wars, Marvel and The Walking Dead games. Every new season or film is a reminder of the time I’ve already spent playing these games, and the certainty something cool is happening in them right now.

And that’s why 18 months on, I still regret churning out of Marvel: Contest of Champions and have unsuccessfully attempted a couple of times to get back into it. In other words, I expect to be playing Star Wars: Galaxy of Heroes, Marvel: Strike Force, and The Walking Dead: March To War for the rest of the year.

Not because I’m a fan but because I know there are good reasons why other people are. In an earlier column, Jon wrote about his anticipation for Star Wars: Rise To Power. If this column has given you food for thought, share your comments below and bookmark this page for more of the same next Monday. Remember to also check out words of wisdom and mirth from experienced games journalists Susan Arendt and Harry Slater each week.