Welcome to the latest in a series of columns on Pocket Gamer. We've sought out the best writers and most experienced gamers in the industry and given them a platform. Today we welcome back Susan Arendt and this week she's enjoying one of our favourite turn-based indie games, The Battle of Polytopia... 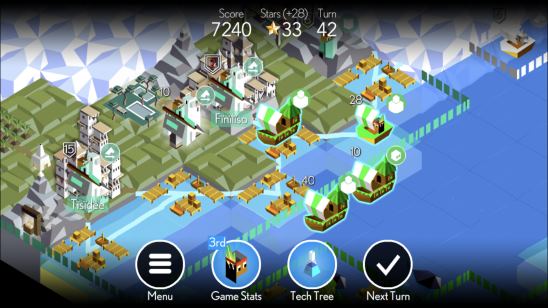 The world is definitely enough

A few years ago, pretty much everyone I knew was playing Civilization IV. I mean everyone. I was pretty sure I was missing out on something, but I’d never tried a Civ game before and IV seemed like an awfully complicated starting point.

A few years later, Civilization Revolution came out, and I was told it was a gentle onboarding to Civ-style gameplay. A streamlined, stripped down version good for beginners. Wonderful! This was finally my chance to see what all the fuss was about.

Good lord, the amount of information that game dumped on my head in the first half hour was enough to leave me catatonic. It was the digital equivalent of being slapped with an encyclopaedia. I bailed. I bailed hard and never looked back, certain that the "just one more turn" allure would never be mine to behold. But The Battle of Polytopia may change all that.

The Battle of Polytopia embraces many of the core ideas without being overwhelming or too complex. You begin by choosing one of four tribes based on cultures from all over the world. Each one begins the game with a different starter skill: the Vikingesque Bardur can collect resources by hunting, for example, while the Romanlike Imperius tribe starts with "organization", a skill on the farming arm of the tech tree.

Adding population to your cities by improving the land or taking over villages (or both) grants you the stars you need to develop new skills, which in turn allows you to do more things, like climb mountains, or navigate the ocean. (I’m not entirely sure why the Free Spirit skill leads to Chivalry, exactly, but whatever, I like how Bardur knights ride bears.)

Polytopia isn’t quite as robust as Civilization, but that’s in its favor. There’s no bargaining to be done, no alliances to forge. Your goal is always world domination through violence - adorable, adorable violence.

Polytopia’s aesthetic is big, chunky, and colorful, with defeat marked by popping noises and success heralded with a bloop or two. If Fisher Price designed a game of conquest, it would probably look rather a lot like Polytopia’s blocky, cheerful design. Forcing you to focus on beating up the rest of the world frees you to learn the appeal of different strategies. I found I like to develop the sea-faring branch of the tech tree first, so I can wallop cities from the ocean, but carpentry and mathematics are also important for constructing catapults. There’s also the strength in numbers approach: create loads of warriors and throw them at the opposition until you achieve your goal. High casualty rate with that one, though, which will impact your final score, but you can maybe offset that with speed by winning a few turns faster.

And you can pay for more - if you want

Despite being relatively simple, The Battle of Polytopia is a great introduction to the kind of multidirectional thinking that a game like Civilization requires.

It’s free to play, but you can spend a buck or two to add new tribes, which you may want to do once you feel like you’ve got a handle on the gameplay. I’ve won more games than I’ve lost, but I’ve yet to three-star any of the tribes, which just tells me there are more efficient ways to conquer the world. Perhaps I should pay more attention to the spiritual skills. I confess I’ve never thought temples would help me slay my enemy, but maybe they’ll inspire the troops? Only one way to find out.

I’m not an unintelligent woman, and I’m certain that if I threw myself at Civ long enough and hard enough, eventually I’d grok its many intricacies. But I wouldn’t be having fun. We all learn in different ways, at different paces, and The Battle of Polytopia is exactly the right way for me to dip my toes in the waters of turn-based strategy. Will I dive into the ocean that awaits? Maybe. But first I think I’ll crank the difficulty all the way up on Polytopia and see what happens.

Check it out, we've recommended Polytopia as a destination before. We'll be sharing more insight into indie classics every week so bookmark Susan Arendt's page now!
SEE COMMENTS