No Stick Shooter doesn't sound like it's that much fun. I mean how can you shoot things if you don't have any sticks? Well, you do it by tapping. And while it starts off a little staid, the deeper you get into the experience the more frantic it gets.

There are some really neat ideas here, and an old school vibe to the shooting that feels comfortably at home on the small screen.

There's a decent level of challenge here as well, considering you're really only using one finger to play the game. Plus a shiny neon aesthetic drips gloops of bright light into your eyes the whole time you're playing.

The game riffs on the likes of Geometry Wars and Space Invaders. You're playing a fixed turret at the bottom of the screen. You've got a shield, and you're being inundated by waves of bad guys from above.

Tap on the screen and you'll fire the weapon you've currently got equipped. You start off with a sort of mortar, blasting out shells that explode when they reach the point you've tapped. 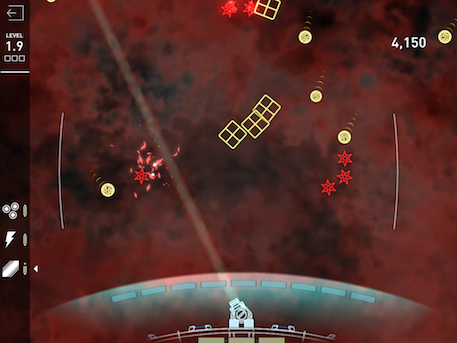 Get deeper in though and things get more interesting. You get a lightning gun, a special laser beam, and more. But they're not just more powerful, different weapons are more useful against different enemies.

And they have a charge limit as well. Tapping buttons on the left of the screen lets you switch the gun you're using, so you need to prioritise targets and try not to waste any of your shots.

Everything becomes super fast and super dangerous in later levels, and it's not just about finishing the waves alive. There are challenges to complete as well.

You'll move on to the next level if you don't complete these challenges to start with, but eventually you'll need to head back to polish them off in order to unlock more of the game. 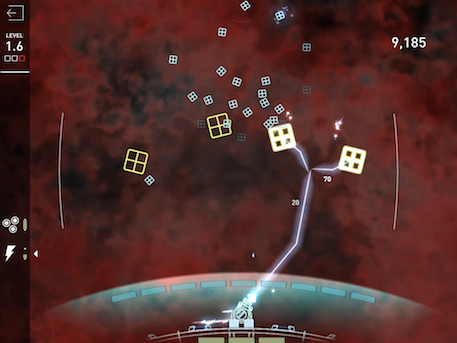 It's a tough ask, and it can get a little grindy. But mastering the problems the game hurls at you makes you feel like some sort of laser wielding legend.

There's no control issues getting in the way of the space-violence, mainly because there aren't really any controls. You're just shooting the alien crap out of aliens and trying your best to stay alive.

The whole thing is tough, make no bones about it, but it's a rewarding experience all the same.

It won't be to everyone's tastes, but if you like your shooters with a growl on their grizzled old faces, then there's a lot to like here.

A surprisingly frantic shooter that feels perfectly at home on mobile
By Harry Slater
| May 18, 2017 |
iOS
Find out more about No Stick Shooter
SEE COMMENTS

Pictionary - It's not the board game you're looking for