Micro Machines is an odd one to digest. Having played the original extensively, it was only natural for me to view its iOS reboot with scepticism - and rightly so.

The micro-racing game was hugely popular back in the early 90s, riling up the family, testing friendships, and providing fun in equal measure.

Despite growing up with a Mega Drive, I actually best remembered playing Micro Machines on the PlayStation with its semi-3D graphics, interactive environments, and slightly creepy characters. I was pleasantly surprised to see that the iOS version kept some of that original charm. 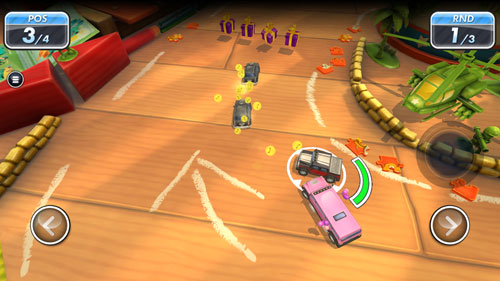 The most obvious change in this version is its move towards free to play. Gems, coins, perks, daily rewards, and lots of unlockable content is offered to tempt players into paying a little bit of cash to get stuff faster.

It doesn't feel forceful though, and you get rewards frequently enough to sustain interest and reduce frustration even if you don't pay, unlike many others in its genre.

There's no plot or faff here either. Sure, key characters return, but ultimately it’s just a racing game. The fun lies in its creative level design and Mario Kart-like power-ups (like a giant hammer or a gun) which you use to take out other players and earn your position at the top of the pile.

You move automatically, turn using arrows on the left and right, and press a button to use a power-up. It's simple stuff. But the cars handle like they're driving in foot-deep mud or attempting to steer on black ice. It's endearing, but frustrating nonetheless.

You can solve these problems with a very simple fix: upgrades, dawg. These can increase the speed, health, handling, and damage to help give you an upper hand and blow the competition out of the water.

Ah, but not so fast. You only have five wrenches to use (for five upgrades) and once those are gone you can either wait for them to refill or buy some more. Shocker. 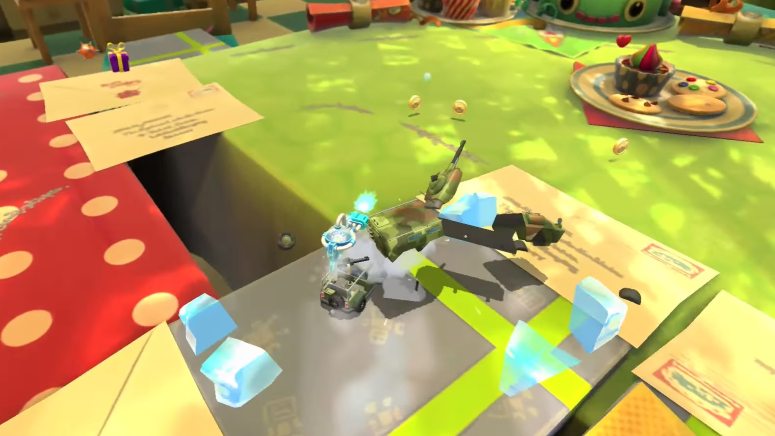 Spare me the details

The same thing goes with car parts. In keeping with its toy car origin, you can purchase/earn little packets which contain three randomised car parts.

You'll get parts you don't need but these can either be given away to friends/team mates or traded in for more packets if you save them up.

My one major gripe is that you can't play offline against bots, and in order to even launch the game you have to have access to the internet. I know that it's more fun played with other people who can think ahead but an occasion may call where wifi isn’t available and then what? Bah.

Micro Machines is in no way original. I dare say it's very much like a lot of multiplayer racing games in its construction, but it is fun. From general racing, battle, elimination or just random play, there's lots to be offered in this freemium game and plenty to keep you coming back… so long as you’re connected to the internet.

Micro Machines is a neat little racing game which offers plenty of content and rewards to keep you interested
By Emily Sowden
| Jul 18, 2016 |
iOS
Find out more about Micro Machines
SEE COMMENTS

[Update] Micro Machines sticks it in fifth gear and speeds out onto iOS, out now

Shadowgun: War Games hits 1 million pre-registers ahead of its launch next month