Kick a starship back into action

Andrew Plotkin has released Hadean Lands on iOS. It's a command-based interactive fiction, a puzzle-adventure, and an "alchemical interplanetary thriller," according to Plotkin.

"This is the most complex puzzle structure I've ever designed. It's the culmination of four years of work," he writes in the game's description.

And yep, it's been in production for four years after fetching nearly four times the funding Plotkin was asking for on Kickstarter to make it back in 2010.

It starts off with you in a perilous situation. You're an apprentice alchemist marooned on an alien planet.

Your only way out of there is to single-handedly repair a starship, and then pilot it. 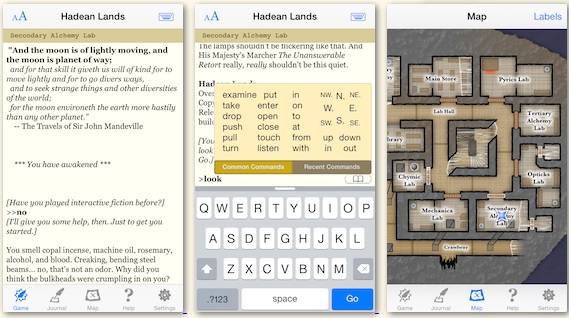 To do that, you'll need lots of preparation. You'll also need to explore the planet to see what ingredients are out there. As an alchemist, you need to put your skills into practice, you see.

"You'll have to calcine, distill, dissolve, and precipitate. And somehow, somewhere, you'll have to figure out what happened and why," Plotkin teases.

If you're intrigued, and fancy a bite of something different on iOS, then you can purchase Hadean Lands for £2.99 / $4.99 on the App Store right now.

Out at midnight: Car Breakers lets you crash cars to fling dummies at dinosaur mouths