Was 2014 the year mobile gaming came of age?

The year the jokes stopped

One of the few dismal things about video gaming is the dreary, interminable platform wars.

PC versus console. Console versus... other consoles. When there are so many wonderful shared things we could be glorying in, fighting over unqualified opinions seems pointless, at best.

Mobile gaming has been on the receiving end of some of the sharpest abuse in these endless wars.

As the platform grew and grew, hobbyists became fond of sniping mobile games. They were snidely dismissed as "casual" and "shallow", as if big-budget games were somehow deeply philosophical, and involved something other than blowing away terrorists.

Yet when I started browsing the App Store on my original iPad, I could kind of see where they were coming from. While most games were great fun, they were also forgettable. Endless runners and arcade puzzle titles offer plenty of amusement, but without character or narrative they blur into one another. 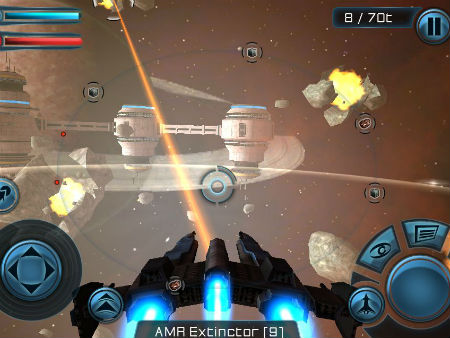 There were notable exceptions. I spent hours with Galaxy on Fire 2 and Dead Space, and both are still among my favourite ever mobile games. But for all their accomplishments, both seemed slightly compromised. GoF 2 had a great touchscreen joystick, but you couldn't help feeling a real one might have been better. Dead Space was a solid shooter, but compensated for clumsy controls by giving you extra time to aim and fire as alien horrors lurched slowly toward you.

Still, the spread of mobiles proved irresistible and devices ended up in the pockets of hardcore gamers along with everyone else. Yet the App Store didn't change, primarily because it faced a major barrier: price. Deep, rich games tend to be expensive. And in an ecosystem ruled by 69p apps, few studios were willing to take a gamble on the minority willing to spend more.

As ever, some did prove brave enough to take on the risk. I can remember scoffing the first time I saw Battle Academy, a game that retails at £13.99, and predicting its imminent demise. Other publishers, like Square Enix and Cave, were making role-playing and arcade games in the same price bracket.

I ended up playing Battle Academy for a review and it was incredible, brilliant, worth every penny of the asking price. My skepticism was ill founded. When I reached out to the publisher to find out more I found a studio proud to be in that high-cost niche, blazing a new trail where others could follow.

So it went on for a while, until a game changing moment in June 2013 when XCOM: Enemy Unknown hit the app store. This wasn't some niche title but a critically acclaimed one from a major studio, with a price to match. When the sales started to notch up, high-cost games on mobile weren't a minority any more. They were here to stay.

In the last six months or so, an avalanche of other releases has transformed the landscape of mobile gaming. The release of Hearthstone was another key moment. One of the biggest developers in the world had decided the time was ripe to move into iOS.

The pivotal moment was, for me, World of Tanks: Blitz. This was another big-ticket PC studio vying for a chunk of the mobile market. What made it special was the fact that their core product was an online shooter, a genre that's traditionally struggled on iOS.

I asked a Wargaming spokesperson why the developer had chosen to make such a bold move.

"Most mobile shooters have focused on replicating the fast-paced gameplay of their counterparts on PC and console," they explained. "The advantage of World of Tanks is due to its deliberate style of play. Tank turrets take time to aim, tanks must be maneuvered deliberately. So it bypasses the issues faced by other, faster-paced games."

Having spotted it as a good fit for the platform, Wargaming went to some lengths to tailor further. "Mobile gamer's play behavior is more opportunistic," they continued. "They are usually pressed for time and seek out great experiences within a five to ten minute window. So we reduced map and team sizes as well as match times. You can have an amazing tank battle in under 7 minutes."

The result has met with commercial and critical favour, racking up five million downloads in the first three months alone. Wargaming attributes this to the simple fact of taking care to put out a quality mobile-centric product. "It's an experience that is unique for mobile rather than just trying to jam as much of the PC game into the platform," they said.

Its success plugged the last gap the the mobile gaming canon. You can now play rich, detailed, satisfying games in every genre on your mobile. And with some of the biggest names in gaming diversifying into the platform, you can be sure others will follow.

But it's not just the famous studios who are finding out that mobile is a place that's worth working in. Smaller, independent developers who've managed to put out successful products are also eyeing up your iOS device.

Surprise smash hit FTL is a case in point. After scoring rave reviews on PC, its developer, Matthew Davis, was struck by how well it would work on a touchscreen.

"It seemed to be an obvious fit," he told me. "From an atmosphere perspective, it just felt right to manage a spaceship from a tablet. And it probably didn't hurt that we had people telling us that via Twitter every day."

He hired a specialist programmer to handle the technical side of the port. But, again, they also took the time to properly understand how the new platform would affect the gameplay.

"We didn't have much experience with touch based gaming, so it was a new frontier of which we were slightly wary," Davis said. "It took the entire development, roughly nine months, to nail down every UI decision. That's about twice as long as we were expecting, but also turned out much better than we were expecting."

Again, it's paid off. "It was also more successful than we thought it would be," Davis continued. "Since we priced it at $10, we didn't know how that would work out in the App Store. But nearly six months later, sales are still going strong and I definitely think it was the right decision. It seems there are still a lot of gamers out there happy to pay reasonable prices for full game experiences. "

This is an essential point. Thanks to those early games like Battle Academy, mobile gamers have gradually got used to the idea of paying sensible amounts for quality games. That's the key that unlocked the App Store to a more diverse set of satisfying games.

It's taken a long time, but it feels like mobile gaming finally came of age this year. There's no aspect - not hardware, not game quality, not range of choice - where mobile gamers ought to feel they play second fiddle to other platforms any more.

Yet on the other hand, neither are we tied down by the weight of expectation that goes hand in hand with triple-A game development. We're at the edge of a new frontier in gaming, where the best in independent creativity can work alongside big money from big studios, feeding off each other.

The future of mobile is bright.

Want more? Check out our 46 other World of Tanks Blitz articles!

Baseless is a space cowboy shooter from the dev of the Silver Award-winning David.