How to survive the Plague Quarter - Hearthstone: Curse of Naxxramas tips and guide

I never thought I'd be celebrating an outbreak of plague. Yet here we are in the plague quarter, the second wing of Naxxramas, and it's a rather more entertaining place than it sounds.

You have to pay to unlock this, and all remaining wings of the game. You'll pay a bit less if you buy access together in a bundle. But this second offering is more interesting than the first. So it's a tempting treat for players who got free access to the super-easy Arachnid Quarter.

Because it's a bit more challenging, we're going to change the format a bit for this guide. Rather than rushing through "normal" difficulty we'll look at each boss in turn, with strategies for each difficulty level.

Noth is a necromancer, and he comes armed with about the most annoying hero power yet seen in Hearthstone. Each time one of your minions dies, he gets a free 1/1 Skeleton.

As if that weren't bad enough, Noth has a deck full of taunters and removal spells to decimate your minions and swell his own ranks. Plague, which destroys non-Skeleton minions on the board, is particularly terrifying.

There are various effective ways to deal with this in normal. A zoo deck might seem counter-intitive given than all those teeny minions end up as skeletons. But with a little luck it can punch Noth out before he can start Plaguing your ranks. 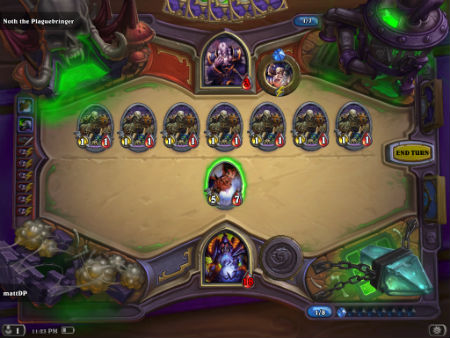 If you want to take a more skilled approach there are two other options. Either take a Druid deck and load up on brutally buffed minions that he can't kill, or run a Priest and use healing to keep them alive.

You'll need similar methods to best him on heroic. But in this mode his free Skeletons are a suitably terrfying 5/5 and keeping them to a minimum is essential. You'll have to pull out all the stops, likely with some powerful cards, to keep them alive.

In both modes the flaw with doing it this way is that hideous Plague card, which wipes out everything in spite of your best efforts. There's no way to guard against this, so just make sure you keep some minions in your hand, just in case.

This second boss is the easiest of the three. He's got a warlock-type deck that tries to rush you down with rapid demon summoning, but it's not that well optimised.

Unfortunately his hero power, which deals damage to the leftmost minion on your side of the board, easily compensates.

But of course you're in control of what appears on the left, so good placement is key. Either put sacrificial lambs in the dangerous slot, or powerful brutes who can take the punishment.

He's not all that hard to beat on normal difficulty. I chose to fight fire with fire, running my own classic Warlock deck. The rapid summons put so much on the board that his ability couldn't chew through them fast enough.

Ironically the card you win for beating Heigan, Unstable Ghoul, is probably the death knell for these exact zoo decks. They have been awfully prolific in Hearthstone of late, so it's about time. 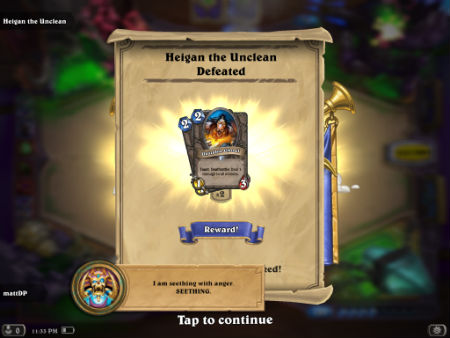 But, as befits the Plague Quarter, priest decks also run well since you can use all that healing to keep your leftmost minion alive.

That's probably the cheapest way you're going to build a deck capable of challenging Heigan in heroic. But you'll still need a big slice of luck to win that way, since his hero power is free and will rapidly thin your minions.

If you've got a card collection big enough to build it, the infamous Miracle Rogue is rather more reliable. This deck relies on damage from combos and fancy tricks to keep your minions out of harm and you supplied with cards. If you take this route, you'll need more direct damage or charging creatures than standard builds to whittle away Heigan's health.

The final fight showcases what I was hoping to see more of in Naxxramas: rule bending to make more interesting duels.

This fungoid monstrosity has a whopping 75 health even in normal difficulty, and 99 in heroic. And his hero power does 3 damage to you ever time it's used. This was clearly designed as a test of endurance.

Loatheb, however, literally sows the seeds of his own destruction. Many of his cards generate spores, 0/1 tokens that sit on his side of the board. Pop one and all your minions get a whopping +8 to attack.

So, what's required is to give yourself as much firepower to kill spores as possible. At th same time, get lots of minions on the board to benefit from the buff. 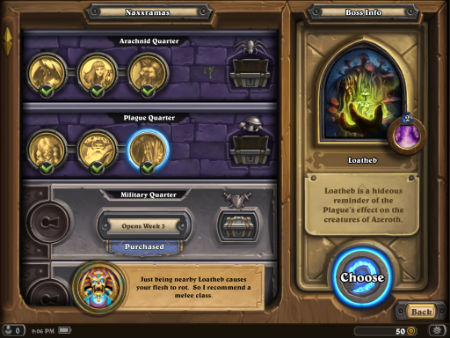 Mage is a great class for this in normal difficulty. The Fireball ability is ideal for taking out spores, while cards such as Mirror Image and other two-for-one basic cards keep you stocked with summons.

The card selection of that class proves a little weak when taking on heroic difficulty. Priests or Warriors who can use healing or armour to keep going toe to toe with Loetheb in the long run work better.

But you still need to keep squashing those spores. Mininos that provide a direct damage battlecry like Elven Archer and Ironforge Rifleman are a must. Area effect spells that can take out several spores at once and provide massive damage boosts are also helpful.

To win the final cards in this quarter you'll need to complete two boss fights with pre-made decks. These are disappointingly easy.

Loatheb is pitched against a comdey Hunter deck made entirely of Webspinners. These are 1-mana 1/1 minions that add a random beast card to your hand when they die.

It basically plays itself. Push out as many of the creepy arachnids as possible. As they start dropping, slap down the more powerful beast cards you'll collect.

With such a wealth of 1/1 creatures at your disposal, popping those spores becomes child's play. And each time you do, your collection of feeble spiders turn into terrifying tarantulas with a +8 attack bonus. 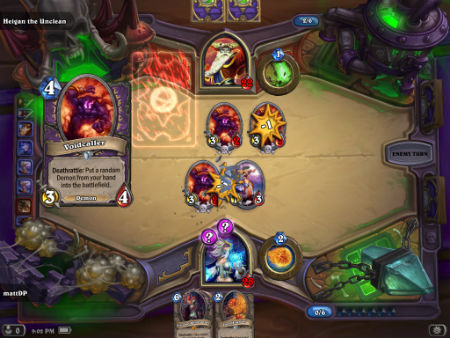 Playing the pre-made Mage deck against Heigan is a little trickier, but not a whole lot. Unsurprisingly for a mage deck, its gimmick is the use of secrets.

Leverage all the secret based combos in the deck to keep yourself stocked up with nasty surprises. With any luck, you'll be getting some useful minion buffs at the same time.

The only thing you have to watch for is Heigan's irritating hero power. A lot of the minions in your deck aren't very powerful when they get played, and are easy meat for his Eruption power.

So, try and make sure you've got minions who can either weather the storm, or ones you can afford to lose on the left. Then just secret your way to a public victory and a tasty new Mage card.

Kapsula, Beavl's futuristic mash up of a racer and a puzzle game, is out right now on Android