How to blitz the opposition - World of Tanks: Blitz tips and tricks

It looks like Wargaming might finally have cracked the secret of making a truly great stick-based shooter on mobile, with World of Tanks: Blitz.

We thought its beguiling blend of measured action and light strategy merited a Gold Award. It's free, too, so there's really no excuse not to play the game.

Except, perhaps, that the heady mix of strategy and action thrills can present an uncomfortable bump to people playing the game for the first time.

Not any more though, cadet. Corporal Pocket Gamer is here with a boot camp of basic training to get you out of the tutorial and onto the battlefield as fast as possible. Atten-shun!

No lesser general than Heinz Guderian said that the engine of a tank is as much a weapon as its gun. Blitz will teach you the truth of this in short order.

If you've ever played a tank simulator (or driven a real tank), you'll know that in place of a steering wheel they have independent track acceleration. If you want to turn, just accelerate the track on the opposite side to the direction you want to go. 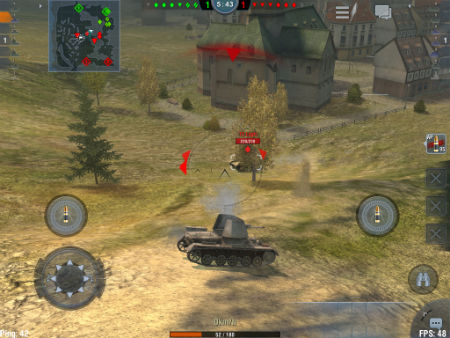 World of Tanks: Blitz is full of realistic physics, but to keep it fun and accessible they've opted for a middle ground in terms of control, a mixture of track turning and a standard thumb-based touchscreen joypad.

Whichever background you come from, it takes a bit of getting used to. It's essential that you master it, so you can make sure the vulnerable bits of your hull get into cover when the firing starts.

And the only way to do that is to practice. So however tempting it is to get into the real game, make sure you get the hang of it during the tutorials.

Once you're in a real firefight, there's still plenty of value in dawdling your way to the action, to get more practice and a feel for how different tank models handle over different terrain.

There are actually several other good reasons to let others charge ahead into the fray, as inglorious as it may seem.

Chief amongst them is that, although your tank is armed with long-range weapons, you can only fire at other tanks you can actually see. The same applies to the opposition: that light bulb icon which occasionally flashes up tells you that an enemy tank has spotted you.

Inevitably, the first ones to be seen, and the first to receive their baptism of fire, are those charging right to the middle of the arena. Hang back, and let someone else take the initial pain. 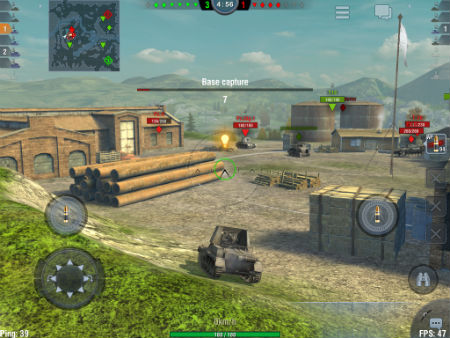 Another justification for creeping slowly toward your objective is that it's often a really bad idea to win by taking the flag.

Not that it's bad to win, of course. It's just that you, and your team mates, will get far more experience for victory if you hunt down and kill all the remaining enemy tanks.

There's no player chat in World of Tanks: Blitz, so if your team gets ahead and you claim victory by smugly sitting in the winners' circle while everyone else is desperately trying to ferret out the remaining enemy vehicle, you won't be able to hear them wildly cursing you for a fool.

But why would I care about all this "experience" I hear you ask? Because it's your route to bigger and better tanks, that's why.

It comes in two flavours. Mostly you'll get experience to spend on the tank you were using in the battle, but you also get a tiny pool of "free" experience you can spend on any vehicle. It's precious. Be careful with it.

You start out in awful pre-World War 2 light tanks, but you can upgrade things like the gun and the engine along different paths that eventually lead toward unlocking a new vehicle. 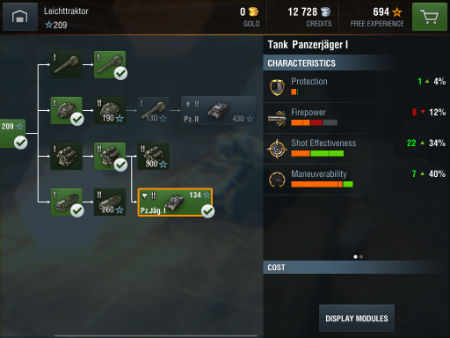 The tree branches allow you to blossom out into light, medium and heavy tanks, or tank hunter vehicles. But this is not a pyramid with everyone chasing after a King Tiger. Just like real history, different vehicles excel in different roles.

Light and medium tanks make up for thinner armour with improved speed and maneuverability, while tank hunters pack massive guns. Massive, massive guns. Try out some different types and when you find one that feels fun to play, don't be afraid to stick with it.

If you're new to the game, you're probably wondering why I'm fixating on staying with a small selection of vehicles. The answer is that you only start with a tiny number of garage slots to keep them in.

If you fill those, and want a new model, you have to sell an old one.

This restriction is there as an incentive to spend real money on this free game. Cash buys you gold, and gold is the only currency that buys new garage slots. 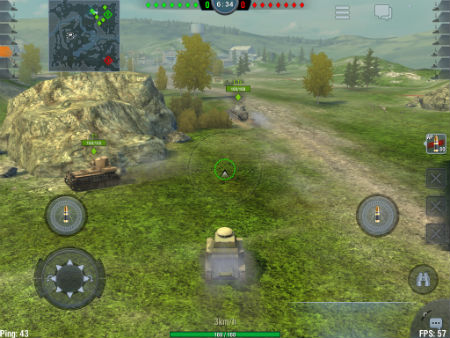 You can spend it on other things, though, like premium tanks. But they're more like fancy stuff for collectors than being premium in the sense of game-breakingly powerful.

Perhaps more worryingly, you can use it to buy upgrades in the form of better ammunition. But don't panic: the advantage is slight, and a skilled player with standard shells will easily blow away a newbie with premium ammo.

If you want, you can buy upgraded shells with credits, the non-premium in-game currency. But it's probably better saved for equipment upgrades. These can't be transferred between tanks, so save them for models you really like. Gun Rammers, which increase reload speed, are particularly effective.

In the meantime, don't be afraid to spend out some credits on consumables like repair packs.

So, now you know how to find enemy tanks, shelter from their fire, and make sure your own is properly equipped to deal with the threat. The last piece of the jigsaw is understanding what to do with all that firepower at your disposal.

For all its accessibility, World of Tanks: Blitz is actually packed with a lot of accurate information about the vehicles it portrays. The most important part to note is that they all have slightly different strong and weak points in their armour.

If you want to drive yourself delirious memorising the armour maps of all the different tanks, you can. But it'll net you only a slight advantage over your enemies. The time is far better spent practicing while repeating the mantra "front strong, sides and rear weak" until it becomes a habit. 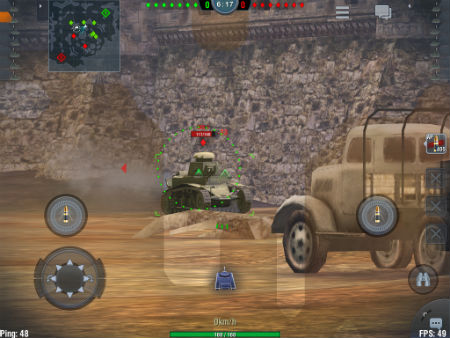 But the game doesn't just have finely detailed armour models, it also features finely detailed damage models too, which vary depending on the part of your victim that you're targeting.

It might seem a good idea to try and disable your opponent by shooting at his gun, or tracks, but this is rarely a good strategy. Guns are hard to aim at and, just like real life, surprisingly well armoured, so you'll likely gain nothing but shell bounces for your effects.

Tracks are much easier to hit, but consider: what's the real benefit in stopping your opponent from moving? He can still fire at you, and if he's driving a heavier tank than yours, that's probably a death sentence.

Try and hit the body or the turret instead - on the sides and rear, obviously. They're bigger targets, and will likely do the job of destruction much faster than being fancy and gunning for specific equipment.

That's all the training you're going to get, cadet. Your country needs you, so it's time to get out there and kick some metal bottom. And remember: the best terrain for your tank is one empty of anti-tank weapons.

Want more? Check out our 46 other World of Tanks Blitz articles!