Ethan: Meteor Hunter is a good-natured, family-friendly puzzle-platformer, with plenty of opportunities to think creatively and reconstruct parts of the environment into a formation that will allow you to proceed further into the game.

But thanks to some ropey visuals it also appears to be held together with twine and gum. Its constant recycling of environments and hazards, along with its confusing puzzle and level design, gives it the appearance of being a fan-made set of levels within a potentially promising game engine. 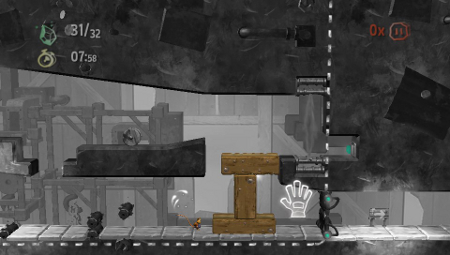 By pausing the action, you can move specific blocks about the level

You're a mouse called Ethan, and you're on an adventure. you can pause time after collecting a special item, and in this state you can move specific parts of the world about within a preset space, which allows you to reach high ledges, defend yourself from attacks, cross ravines, and so on.

Each new puzzle adds a different twist, and the strict limit on how often you can pause the game to move objects encourages you to think ahead and really consider how you'll solve the problem.

A great example is where you're given (what is essentially) a ball in a pachinko machine, and must get it from the top of an area to the bottom, without falling into a trap. You think about which path the ball will take, depending on where you release it from, and when you get it right you feel ever-so smart.

The controls are far too sensitive in this editing mode, though the pressure of jumping platforms is off, so wrestling with them isn't a huge issue. But when the puzzles get harder, more convoluted, and filled with unpredictable deaths, it's hard not to feel cheated by the designer.

In one level, named Jackpot, you'll spend ages figuring out how a puzzle works, then put your theory into action, then unfreeze time to go on your merry way. Only you can't, because your route is blocked by a puzzle piece, and you had to be standing in a very specific position to avoid this happening to you. Not fun.

That's the key problem with Ethan: Meteor Hunter: the developers don't seem to understand that just because they know their game engine inside out, that doesn't mean you do.

You end up in situations where you're left wondering how on earth you could have figured out the puzzle in one go, and the reality is that you probably couldn't. 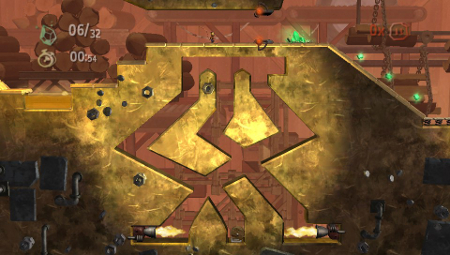 Once you've completed a level you're presented with a scoreboard which documents how quickly you finished the stage, the number of Fragments you collected, and so on. The idea is to then go back and speed-run the game.

The character movement isn't up to this task. Ethan has significant weight to him - especially for a mouse - so it takes a fraction of a second longer than you might expect to get him moving.

He also doesn't react as quickly in mid-air as you might like, so trying to compensate for over-jumping becomes much trickier. It's not a big deal when you're just trying to make it through the game, but when having a go at the best times it's a pain.

It's doubly annoying that these issues persist when the game changes from platformer and takes stabs at other genres. Platformer, puzzler, space shooter, Doodle Jump clone, auto-runner: Ethan tries all of these genres and does a half-arsed job with all of them.

On top of this, the game has a very simplistic look. The model for Ethan is basic, components of the world are re-used frequently, and the single sound effects per action begin to irritate before long.

There's a great deal of creativity to be found in Ethan: Meteor Hunter, but it's unfocused and unfiltered, with thoughtless and unfair level design compounded by weak controls and generic presentation. We suggest you keep hunting for something meatier.