By Harry Slater
| Mar 26, 2014
iOS
|
Globlins
Get Globlins on...
Find out more about Globlins
Available on: iOS

Sometimes in Globlins, you'll solve a problem without even trying.

With a few jabs on the screen, the bulbous creatures you're out to pop will all explode in a shower of purposefully directed gloop.

Watching the titular menaces burst is still a perfectly pleasant experience, but there's a distinct feeling that it was the game, rather than you, that achieved anything.

Not every level plays out that way, and there are times when you'll have to give your head a good scratch before you work out the best way to proceed.

But you do get the feeling that the difficulty curve isn't quite pitched right, and that more often than not trial and error will get you through much quicker than spending the time to work things out. 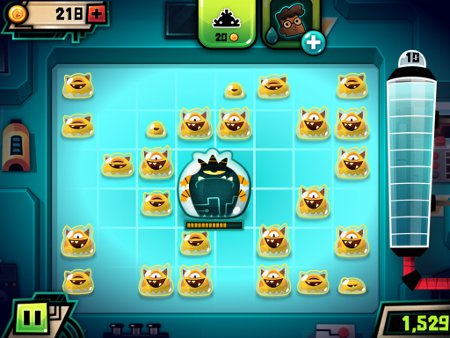 This game is all about making chain reactions. Each level gives you a number of poppable creaturers on a grid. When they burst, they spew out some blobs of goo, which in turn will burst any other monsters they hit.

Different creatures burst in different ways. Some spurt out in four directions; others more. Figuring out how to chain everything together in as few taps as possible is the aim of the game.

As you play, new mechanics are added on. You only have a set number of taps or drops to use each level, though you can refill that gauge with bigger chains.

You can steal DNA from other creatures and mix it with ones on the board, and grab extra drops from in-game characters or Game Center friends.

It all feels neatly put together, and there's the level of polish here you'd expect from a Cartoon Network production. This is a game that fits very neatly onto the App Store. 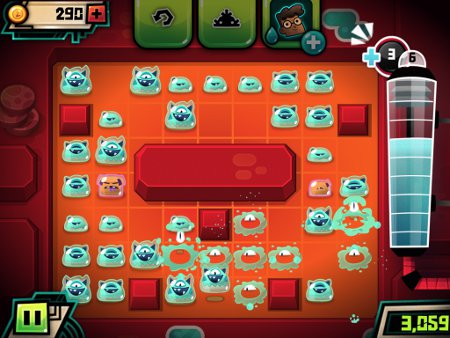 As puzzlers go, Globlins is better than most, then. It's just a shame that it can't quite reconcile its central mechanics with the challenge it presents.

Still, it's a well-presented and reasonably entertaining way to spend a few hours.

And while it might not be the toughest game on the App Store, its splodgy end product is enough to put a smile on your face.

It might not be a challenge, but there's something eminently likeable about Globlins that manages to make it worthwhile
By Harry Slater
| Mar 26, 2014 |
iOS
Find out more about Globlins
SEE COMMENTS

Out at midnight: Flashout 2 is a massive futuristic action racer for iPad and iPhone

Out at midnight: Cabin Escape is a gloomy point-and-tap prequel to Forever Lost for iPad and iPhone