TriBlaster is a fever dream of a space shooter. Its retro lines are stark and impressively cool, its neon angles offer an arcade tour through the past's vision of the cosmic future.

But for all this slick trancey frippery, there's still an intriguingly simple, often frustrating blaster to discover.

It doesn't demand as much of you as a typical bullet-hell game does, especially in terms of balletic weave and dodge. And it doesn't induce the same narcotic-edged euphoria as the likes of Rez.

Somewhere in between, though, it finds its balance.

It's frenetic but never overwhelming. It's esoteric but rarely vague. Oh, and sometimes it lets you try and catch pyramids that are being gobbed at you by a giant alien face. 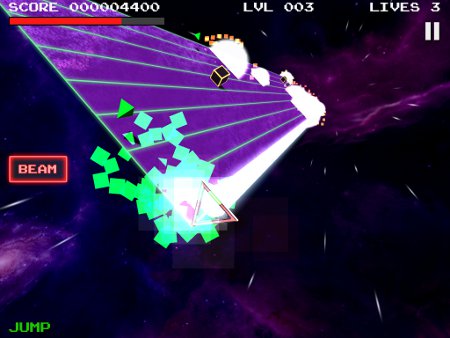 This part wasn't even that exciting

You play a triangle that's attached to one end of a series of lanes. Down these lanes come all manner of extraterrestrial shapes... from rolling cubes to bouncing amalgamations of corners, all of them intent on killing you.

You move your triangle around by dragging a finger to the left and right of the screen. If you're moving, you're firing. Lift up your finger and the bullets stop. This is usually a bad thing.

You unlock a beam special move once you've snaffled some of the green pyramids that defeated foes drop. You tap to engage this special move, and then blast out a stream of energy that blows up anything in its path.

To begin with, the lanes around which you're darting are on a flat plane. After only a few levels, though, you're twisting through loops; turning at right angles; and mounting large curves to try and shower death down on your assailants. 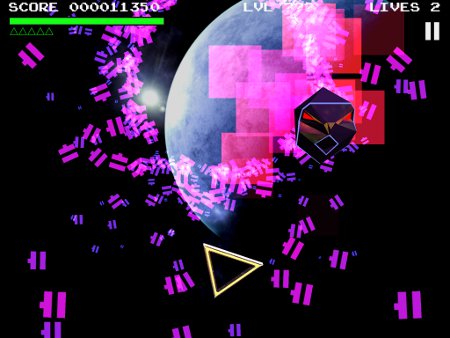 A picture paints a thousand words. No idea what THEY are, though

It makes for an interesting and slightly breathless experience. That slight feeling of nausea when you swoop upside down to pick off some approaching enemies has to be felt to be understood.

In the earlier levels, you have the occasional realisation that all you're really doing is sliding from left to right. Once you're further into the game, though, there's a twitchier feel to proceedings that helps generate more excitement.

TriBlaster is at turns simple and head-messingly hectic. But it delivers these extremes in the sort of package that it's almost impossible not to like.

A fast-paced, sometimes repetitive but never boring blaster, TriBlaster is definitely worth a shot
By Harry Slater
| Mar 24, 2014 |
iOS + Android
Find out more about TriBlaster

Pew pew pew like it's 1987 in vector-style shooter TriBlaster