Just once I'd like to play an RPG where the "empire" isn't full of mustache-twirling, evil stereotypes.

I don't know if we have Star Wars or the Romans to blame for this one, but you can bet your bottom gold piece that your protagonists will end up on the opposing side of any empire that pops up in a modern RPG.

Chrome Wolf, Kemco's latest by-the-numbers JRPG, is no exception to this trend, but it does introduce a fun new element to the mix: tanks.

And I don't mean heavily-armoured paladin types that can soak up damage for mages. I'm talking about 30 tonne lumbering M4 Shermans.

Chrome Wolf is set in a fantasy dystopia that mixes the lands of any 16-bit Final Fantasy with a vague World War II level of technology.

Like Girls und Panzer or Valkyria Chronicles, your characters toss aside swords, staves, and bows and take to the field with sniper rifles, gattling guns, and pistols.

Yet despite this leap in weaponry, battles are still the familiar, turn-based affair that players who follow Kemco have come to know and love.

This makes Chrome Wolf feel simultaneously familiar and exotic. You’re going through the motions of a standard, mid-90's JRPG but it still feels somehow wrong to see your characters gun down enemy UFOs before a familiar victory jingle plays.

Yet for all the novelty of the tanks and weaponry, Chrome Wolf isn't an easy RPG to get into.

The pacing is severely hampered by a glut of dialog in the opening two hours that has you reading more than playing, which might be a turn off for those looking for a quick pick-up game.

And those tanks that Kemco (and I) so prominently associate with Chrome Wolf? You lose yours in the opening act and you don't find another for a good hour and a half or so. 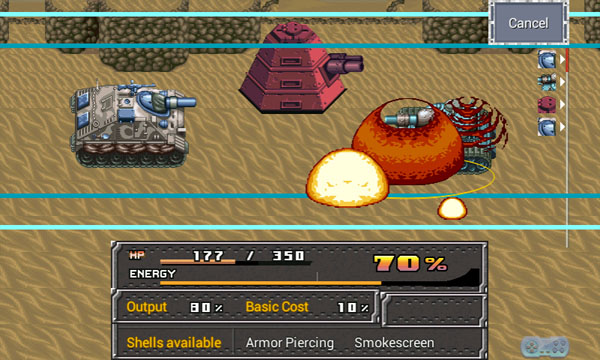 Setting aside this bait and switch, there's still a bit to struggle with Chrome Wolf that makes it difficult to recommend to all but the most hardcore JRPG fans.

The characters are bland, the story is somewhat predictable, and the race of 'Unicornians' that you take up with has one of the absolute silliest names of any JRPG fantasy race I've encountered to date - no matter how accurate it might be.

Yet if you can trundle past the lacklustre story and silly names, there's still a decent JRPG at the core of Chrome Wolf.

It'll never take your breath away, and the game's paltry four stock music tracks will annoy rather than inspire, but there's something to be said for turn-based, fantasy World War II combat.

If you're on the fence about Chrome Wolf, it'd be best to grab it during a sale since its promo $3.99 / £2.49 price seems about right for what it delivers.

Don't let the guns and tanks fool you - Chrome Wolf is, for better or worse, a by-the-numbers 16-bit RPG from start to finish
By Matthew Diener
| Dec 6, 2013 |
Android + iOS
Find out more about Chrome Wolf
SEE COMMENTS