Have pickaxe, will travel

On Wednesday, Mojang made good on a promise it delivered earlier this year and released the alpha version of Minecraft Realms in update 0.7.0.

A tweet by Johan Bernhardsson tipped us off to the update for Minecraft - Pocket Edition (which is rolling out now), and also clued us in to when we can expect the multiplayer servers to be handed out: 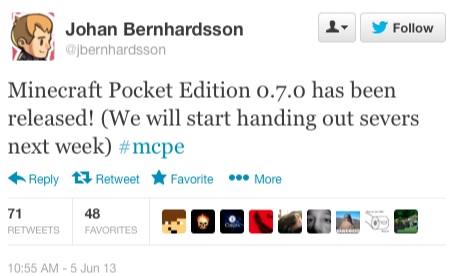 Update 0.7.0 will allow players to create permanent worlds on public servers, and is billed as being a "one-click solution" to setting up your own Minecraft world.

Also new in the 0.7.0 update are the additions of buckets, fire, and smooth lighting. Additionally, a connecting player's inventory is now saved on a server.

Add some slick new menus to the mix, and it's easy to get excited about the 0.7.0. update - although we expect most of you will be more excited when the servers are handed out next week.

Minecraft - Pocket Edition to get 'exclusive' features in the future