Plus+ spills the beans on forthcoming ngmoco iPhone games

Over at TouchArcade some keen eyed social gaming detectives have spotted a couple of exciting morsels of gossip buried within the Plus+ accounts of some ngmoco employees, pointing toward two new iPhone games called GodFinger and We Rule.

The former of these two unannounced games pun-tastically points toward a Pocket God-style spin off for Rolando. The inadvertently published high score table shows awards for throwing a follower over 500m, killing a skeleton and manipulating the weather - the type of thing a vengeful deity might well indulge in. 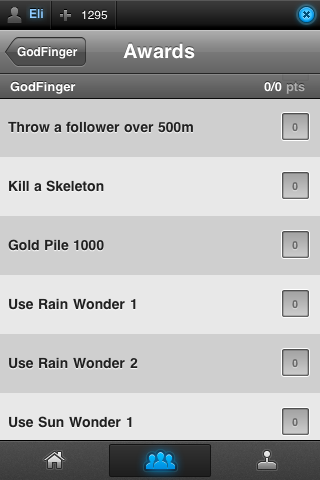 This also ties in neatly with the special power found in Rolando 2 when tapping the screen allows you to destroy on-screen items, and a "level up" Tweet posted by ngmoco's marketing veep Clive Downie lends further weight to the premise.

We Rule hasn't had quite so much of its divine thunder stolen, however. At this point there isn't much more than the game icon and an awards listing for "Castle Builder" and "Social Butterfly". Maybe some kind of social strategy game, with a bit of SimCity styling thrown in?

Let's just hope ngmoco has seen sense and got the Wee Papa Girl Rappers to do the theme music.