While characters such as Alex Kidd and Sonic The Hedgehog may no longer attract the feverish attention they did during the height of their respective fame, having been cruelly pushed aside by modern franchises like Modern Warfare and Grand Theft Auto, there clearly remains a sizable market for vintage gaming.

The past few years have seen a rise in the number of hardware clones, which attempt to replicate the experience of playing older machines on more mobile hardware. Not so long ago Blaze treated us to the dinky Mega Drive Portable, which contained several pre-loaded retro gems but lamentably had no way of accessing Sega’s impressive 16-bit back catalogue.

AtGames (the company behind the aforementioned Blaze handheld) and Hyperkin have collaborated to solve this issue, and the end result is the GenMobile. Sega historians will be aware that the name is derived from the North American moniker of the 16-bit powerhouse: The Sega Genesis. 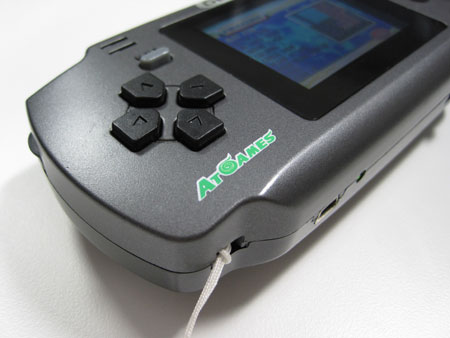 Like its predecessor, the GenMobile is essentially a Mega Drive in portable clothing. Secreted within its digital innards are 20 titles from back in the day. While the inclusion of some of these games is questionable, the vast majority are well worth a blast. Heck, Shinobi III is worth the price of admission alone.

The machine features a 2.4 inch LCD display, which doesn’t really represent much of an improvement over the one found on the Blaze device - it still pales in comparison to other handhelds such as the DS or PSP.

However, given the relatively humble graphical capabilities of the Mega Drive hardware, the underwhelming screen resolution doesn’t actually pose too much of an issue.

Notable embellishments include a full six-button setup (so games such as Street Fighter II are playable) and a rechargeable battery, which provides around ten hours of play.

However, the most obvious enhancement is the cartridge slot, which allows you to play Mega Drive and Genesis games from any region. The addition of this element renders the GenMobile a fairly chunky customer, with a large amount of internal space being devoted to accepting the sizable game media. As a result it feels quite light in the hand if no cart is inserted.

Getting games in and out of the device is trickier than you might imagine, with the fit being especially tight - particularly for Japanese Mega Drive cartridges. However, once you learn to grip the unit in a certain way the process becomes much easier. 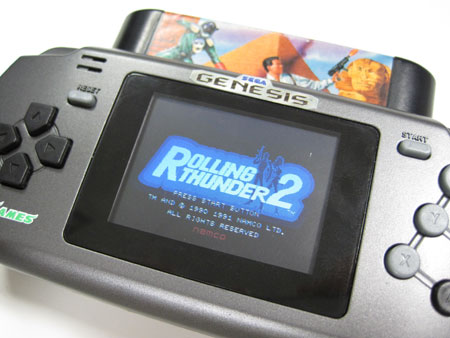 The addition of the cartridge port naturally opens up a world of possibilities. Instead of being limited to the games stored in the machine’s internal memory, you have access to a massive number of titles and for this reason alone the GenMobile ranks as a highly desirable purchase.

Couple this with the ability to hook the unit up to a television via a composite output and you’ve got a highly versatile gadget. Sadly, though, there are elements of the design that sully the otherwise positive experience.

Firstly, the D-pad is less than ideal. It’s an almost direct copy of the one seen on Sony’s PlayStation pad but is actually two bits of plastic - split diagonally - rather than one solid piece.

For games where no diagonal movement is required it performs well enough, but if you’re playing a 2D shooter or fighting game where access to all eight directions is an absolute necessity, it’s bothersome. With practice you can overcome this issue, but the pad is a poor second to the one boasted by the original Mega Drive. 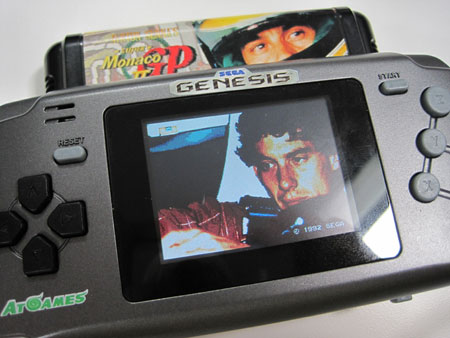 Another area where the GenMobile fails is build quality. The unit feels quite cheap and nasty, and the edges of the casing look half-finished in places. It goes without saying that it’s churlish to expect such a device to complete with the likes of Nintendo's and Sony’s portables when it comes to manufacturing standards, but it’s disappointing all the same.

Still, even these little hiccups seem less significant when you look at the wider picture. This may feel like a inexpensive unit but that’s largely because that’s exactly what it is - the GenMobile currently retails for the equivalent of £30 in the US, which is fantastic value for money when you consider you’re already getting 20 games out of the box.

There has been no word on a UK release as yet - we assume that Blaze will step in and market the machine in this region - but even so you’re unlikely you’ll save much cash by waiting, and because the GenMobile had the ability to charge via a USB connection you don’t even have to worry about getting your hands on the correct voltage converter.

While it isn’t perfect, the GenMobile is sure to represent true retro heaven to those of you who still adore your 16-bit classics and want to give your collection a new lease of life. 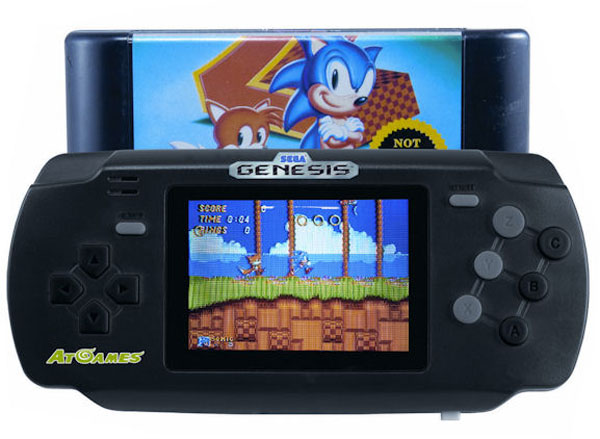 While poor build quality and a iffy D-pad soil the experience a little, the reasonable price and opportunity to enjoy classic Mega Drive software on the go contribute immensely to making the GenMobile a solid purchase for retro addicts
By Damien McFerran
| Dec 9, 2009 |
Mobile

The Simpsons Arcade fights its way onto mobile