Sun Tzu would be proud

Fans of the RTS genre rejoice -- Art of Conquest has arrived to blow the competition out of the water. This new fantasy strategy game by Lilith Games gives you full control of your own kingdom in a colourful world full of dwarves, magic, and monsters.

Art of Conquest gives the player true independence; there are no automated, predetermined battles here. Even in Art of Conquest’s PVP mode you’ll be treated to real time gameplay in which you use your abilities to change the course of battle. You set out with your troops to conquer 5 opposing enemy kingdoms, and you have full control of how the battle plays out. In true RTS-style, you place your troops in formation before setting them loose on the opponent, using your heroes’ unique abilities to turn the tides of war.

All of this action takes place on one sprawling world map. Rather than being matched with PvP opponents from a central hub, Art of Conquest embraces the excitement of exploration. It’s your duty to go forth and conquer, exploring the world to uncover resources and weaker towns and strongholds for you to capture. 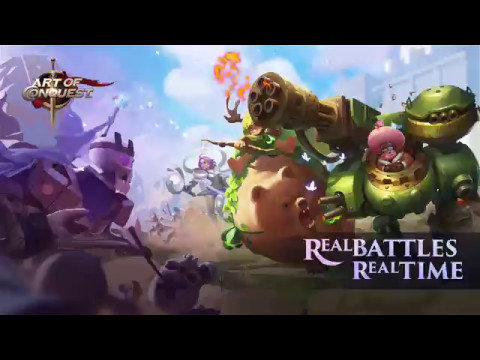 It’s not all fighting, though. You can incorporate friendly castles into your growing kingdom, joining forces to take out encroaching enemies. Or, join a guild (or House as it’s known in the game) and combine forces for even more power.

It’s the perfect marriage of MMO and strategy elements, and you’re free to explore it all right now on iOS and Android.

What's A Preferred Partner Feature?
From time to time Steel Media offers companies and organisations the opportunity to partner with us on specially commissioned articles on subjects we think are of interest to our readers. For more information about how we work with commercial partners, please read our Sponsorship Editorial Independence Policy.
If you're interested in becoming a Preferred Partner please click here.
Next Up :
Summoners War: Sky Arena's latest update introduces Battle Angel, a new monster from the future