Hands-on with Angry Birds Go! - here's everything you can buy in Rovio's kart racer

It's the unwritten law of video games: as a franchise goes on, the probability that it will turn into a go-kart game approaches 1.

It happened to Crash Bandicoot, Mario, Donkey Kong, Jak and Daxter, Kirby, LittleBigPlanet, Final Fantasy, Sonic, and Mega Man. And now, with next month's launch of Angry Birds Go!, it's happening to Rovio's physics-puzzler, too.

The cartoon racer just went live in New Zealand, as part of an iOS soft launch. We went to check it out and found a game that has been given the full - and we mean full - free-to-play package.

It's got $100 cars and energy systems and pay-for power-ups and multiple currencies and advertising. It's really quite impressive, to be honest. Take a look - here's everything you can pay for in Angry Birds Go!

Use your special power more during a race 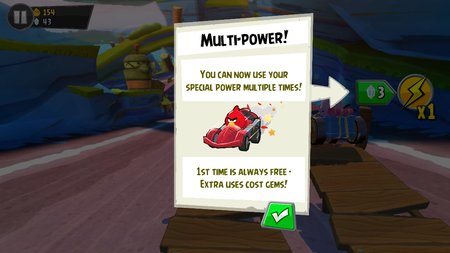 Angry Birds Go! is all about taking on the feathered and bacon-flavoured cast of the Rovio universe in a series of go-kart races.

You can control the action with tilt or touch, and while it's very basic - you can't jump and drift like in Mario Kart, for example - it feels good to play. You also start each race by catapulting your bird from the start line.

Each character has a power-up. Red's got a speed boost which comes in handy during time trials. Pink can blow bubbles, just like in Angry Birds proper, to nudge aside nearby racers.

You get to use your power-up once or twice for free, but you can also use your premium currency - gems - to stockpile a handful to give you the edge over the competition. 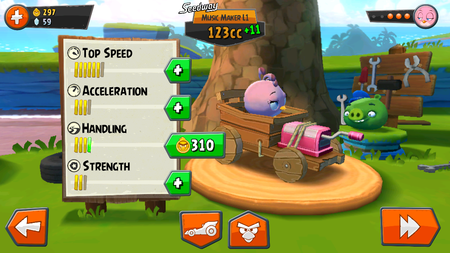 You pick up coins as you race, and sometimes get a handful at the finish line. You can use these to upgrade your ride's top speed, acceleration, handling, and strength.

Each incremental tweak also boosts your CC rating, and the different events - including races, one-on-one challenges, time trials, and an event where you smash up fruit - are locked out until your car is fast enough to compete. 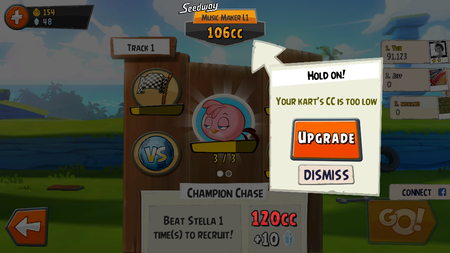 Grinding for coins to upgrade your car means playing the same few events on the same few tracks over and over again. I've played about nine events, but they've all been on just two tracks - only ever with very subtle changes.

You can use gems - the game's premium currency - to get more coins. Gems are given in small quantities for finishing races, and you might find a few on the track, but you'll need to shell out real cash if you run out. 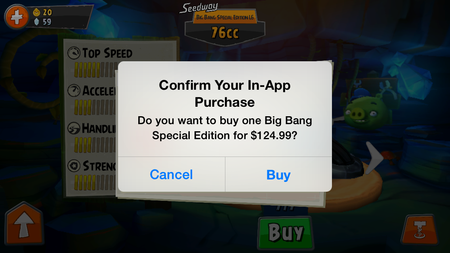 Each car can only be upgraded so far before the clumsy wooden jalopy becomes obsolete. And, guess what, the cars with more capability for upgrades cost real money.

Just like in Angry Birds Star Wars II, you can also buy the Telepod toys and scan them in to your iOS or Android gizmo to unlock the corresponding cars in game. 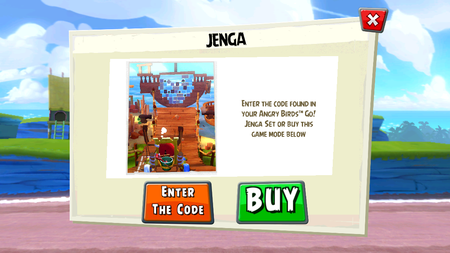 The same goes for the Jenga game mode. You can buy it as an in-app purchase, or use the code in the box for the tie-in Jenga set to unlock it for free. 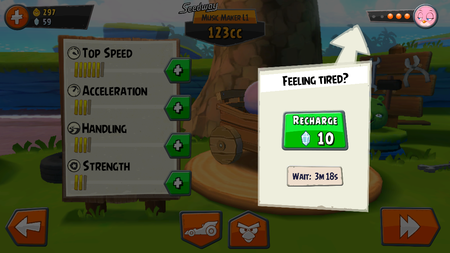 And finally, Angry Birds Go! has an energy system. Each bird can get five races in before becoming tired, and then you have to wait - or pay - to get that bird back behind the steering wheel.

Once you unlock a few more birds you can tag in an energised bird instead, which is a lot like Real Racing 3's repair system. But it's a little annoying when you need Red's speed boost to beat a time trial event and he's all tuckered out. 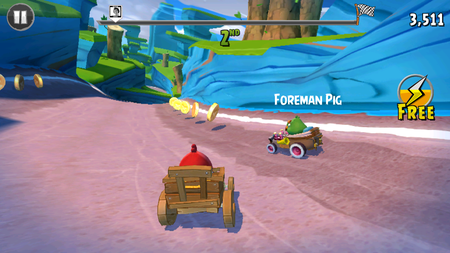 Angry Birds Go! is a fun downhill go-kart racer with a handful of different modes, power-ups, and characters. And it looks great too, with a subtle cartoony cel-shaded style. The only thing missing is multiplayer.

But it also feels as much like a shop as it does an app, and as much like an advert for Hasbro toys as a game. It's just hard to have fun when you can't afford upgrades to your kart, when you're too slow for the competition, and when your bird simply runs out of gas.

The game's out worldwide, on iOS and Android, on December 11th.

Note: This hands-on preview is based on a game in 'soft launch', so any prices and mechanics are subject to change before the game's worldwide release date.
Next Up :
Heroes of Crown: What to expect from Woobest Game's 3D idle RPG