Amazing Katamari Damacy review - Does it capture the heart of the originals?

There are two sorts of people in this world - people who revel in the inherent joy of Katamari Damacy's stuff-rolling exploits, and people who don't have souls.

I say this not to provoke outcry, but to set out my stall from the off. Katamari Damacy is a bright light in a world of dull-grey-dude-bros, a bastion of camp delight in a universe thwarted by murder simulators.

And Amazing Katamari Damacy is no different. It's ridiculous, it's cackle-worthy, and while it might not have the freedom of the original games, there's still an awful lot to like in this mobile iteration.

The game takes the basic shape of an endless runner. Instead of collecting coins though, you're rolling up all the objects small enough to be attached to your ball.

The deeper you get into a run, the bigger your ball gets, and so the bigger the items you can pick up get. You start with ladybugs, you progress on to chunks of wood, and then you start collecting cows.

There are no lanes here. Instead you've got free rein over a linear path. It's edged, but smashing into the edge doesn't usually matter. Hitting other things, however, can have disastrous consequences. 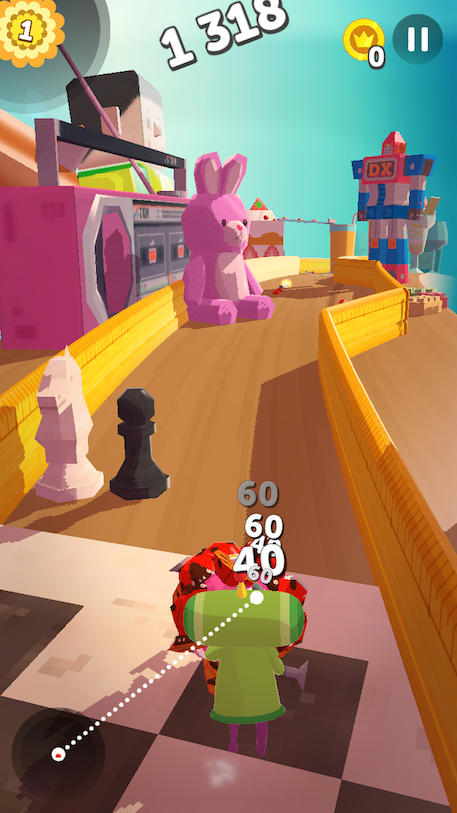 Sharp circular saws will kill you in a single hit. And if you crash into too many objects that you can't pick up, the King of Cosmos will show his displeasure in your antics by ending your run. Which is fair enough, he is the king of the cosmos.

You collect shiny things in order to launch rockets. These are essentially loot boxes, and they take a good few hours to launch on their own. You can spend gems to get them into the sky quicker though.

Alongside coins, which you can use to upgrade the buffs you pick up along the road, these also give you fragments of constellations. These power-up different items, giving you a better chance to get a higher score.

Sure it might not have the chaos of a real Katamari Damacy game, but Amazing Katamari Damacy still manages to squish a good deal of the fun of the series into nicely mobile-sized chunks.

This isn't your average endless runner, and the overwhelming feeling you're going to get while playing it is one of almost unbridled joy.

Will it stick around on your homescreen for long? No, probably not, but there's enough going on here that it's well worth putting it on there in the first place.

Amazing Katamari Damacy review - Does it capture the heart of the originals?

Amazing Katamari Damacy might not be the full KD experience, but it's still a slick and engaging mobile version
Next Up :
DC Worlds Collide review - "DC fan service in an enjoyable gacha package"