PocApp Studios’ latest mobile merge title, AlchiMerge: Merge & Craft has officially hit virtual shelves. After a tonne of pre-registrations and waiting, everyone will now be able to hop into the vibrant Vortex Island, where they will merge their way through a new world called Anima. The classic merge genre receives a twist with AlchiMerge, where players will be able to run their own Alchemy Shop where they can craft and sell their own magical items.

AlchiMerge takes place in the same universe as other games by PocApp Studios like Castle Cats and Dungeon Dogs. Catania and Lupinia were two kingdoms that lived vastly different lives but it all changed during the Great Tremor that caused dimensional rifts to show up, leading to the appearance of the Vortex Isles, a land full of mystery and permanent storm clouds. When inhabitants of these two regions travelled to the island, they met humans for the first time. Anima suddenly houses three kingdoms that did not know the existence of the others. What will happen? 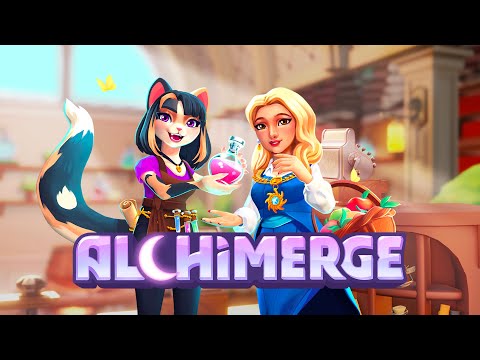 Speaking about the game, CEO & Producer at PocApp Studios, Dilaram Massimova, said: “AlchiMerge is our biggest game to date and while it presented new challenges, like building our own server backend and working with 3D for the very first time, it has been the most creative and productive period for us. We hope that our fans appreciate the dedication and work we’ve put into AlchiMerge, and we can’t wait to see them play!”

The goal is to become the best shopkeeper in the entire archipelago. Players must use various ingredients to come up with magical potions and other items. Money earned can be used to decorate and expand the shop so customer intake and satisfaction improve. But none of this has to be done alone either. Players can join forces and create an Alliance in a shared city where they complete batches of orders simultaneously. Teamwork is dream work!

If you’re interested in being an alchemist, then download AlchiMerge: Merge & Craft for free on the App Store and Google Play.

Also, check out this list of the best games to play this week!
Next Up :
Terramorphers, a brand new tactics strategy RPG, has launched for Android

AlchiMerge will soon let you craft potions and build your own alchemy shop on the Vortex Isles, coming to mobile on June 7th