AkiRobots is a puzzle platformer that sees players trying to navigate a series of levels whilst controlling multiple characters at the same time. We decided to send in our App Army to see how they contended with this brainteasing mechanic and whether or not it made this puzzler stand out.

I actually quite enjoyed it much more than I was expecting to. Lately, I haven’t had a whole lot of time for video games so when one comes along that I can play in short bursts I’m all for it. Very clever puzzles that slowly ramps up in difficulty as you progress, it kinda feels like a tilt game without tilting. Since everything moves when you move you really have to plan things out and I liked that a lot. Highly recommend.

I quite enjoyed my time spent in the company of this new kid on the puzzle block (pun intended) titled #AkiRobots. Throughout the game you control a square robot(s) which apparently is running low on energy and your main objective is to reach the charging plug in order to beat the level. If you do this in a set number of moves, you earn the perfect badge, which is a standard for many Sokoban-style puzzle games.

7 different worlds with 100 levels await you throughout your journey. I praise the overall sleek design, interesting game mechanics, the presence of the dedicated "quit" button to properly close the app and the fact that each level bears its own name which might hint at the solution if you get stuck. There are two control schemes in the game (swipe and on-screen buttons).

Gameplay-wise I was way more successful with the latter scheme. So if you are stuck, it might worth a try changing the controls. This game is well-done and thought-out, I recommend it to all puzzle fans out there. PS Also as a puzzle enthusiast, I always cherish the moments when you beat the level and use one less move than it is supposed to be (see the screenshot below).

AkiRobots is a cute puzzle where you must guide your robot to a charge point by sliding in four directions. Things start off simple and difficultly gradually increases as more elements are thrown in like lifts and reverse robots. Graphics are simple and the tune that plays is quite jolly. The only fly in the ointment is the touch screen controls, some levels require precision and getting it right can be finicky. Really enjoyed this game and the level editor is a great addition for when you exhaust all the levels.

AkiRobots sees you hitting one of four directional keys each of which has an effect on every robot populating the level, some robots react in a straightforward way to the input, others have their outputs inverted or tweaked.

You are going to spend a little time analyzing how the structure of patterns functions on each level, then using your grey matter or trial-and-error to manoeuvre a selected unit to its end goal. For me, #AkiRobots is reminiscent of those little maze puzzles where you guide a ball by tilting, except the elements which compose the puzzle each responds differently from one another with each input.

At times it feels like traversing the abstract Dreamscape of a professional Lock-Pick as you jostle the systems, this way and that, to advance your tiny agent of progress through. There is a level designer which promises longevity in content, and a platform for creativity. There is a lot of value here, and the puzzle design is top-notch, a recommendation from me.

This is a really good puzzler. Move the designated block to the plug - sounds simple? But as the levels progress it becomes more complex as blocks move up and down and the two halves of the board move in opposite directions. Colourful and sometimes tricky, this is a great game if you need a good distraction. There is a certain uniqueness to the gameplay yet it has enough familiarity that it is easy to pick up and go. Besides the main game, there is a side section that allows you to build your own levels - with all the tools needed to make them as complicated as you want. It gets a big thumbs up from me.

I love this game. As a puzzle fan, this is a very devious puzzler. I love the difficulty involved, the mechanics used the introduction of new mechanics and characters that throws at us even more difficult puzzles in the late chapters of the game. In this game, when you make a move, everything moves (or almost anything). All the robots move, some move in the opposite direction, and you have to push stones, and all of it so you can get one of the robots to a power socket.

It's simple but pretty ingenious and enjoyable. There a lot of levels to play through, and there's even a level editor where you can create your own levels, and share it with friends. I would have liked to see a place where we can find levels shared, but I guess you have to find them online or simply sharing between friends via text message, email, whatever. iCloud save is missing also, so when I tried jumping to an iPad, no can do, I had to start from the beginning.

No sound through AirPods also, so I had to use regular wired headphones. The music is alright and the sound effects are simple. The controls work very well, and you have unlimited UNDOs and Restarts. For a puzzler fan, you will love to solve every level and be very happy when you find the solution. Doing it in fewer moves would be better, but I'm glad just by solving the puzzles. Great game.

There is a good selection of puzzles for anyone into sliding puzzles to be found in #AkiRobots. To me the presentation put me off, as it is a bit muddled lacking in both detail and graphical fidelity. The robots you slide about lacks animation, and thus make them feel impersonal and boring. The game itself is your standard slide or move one pace at a time getting object a to point b.

The objective is to get your robot to an electrical socket while navigating a wide variety of hurdles. There is also a level editor, but I did?t try it more than the bare basics. Presentation is truly important in a game like this, and the muddy graphics made me bored after a couple of levels of the same yellow-brownish levels and static robots. 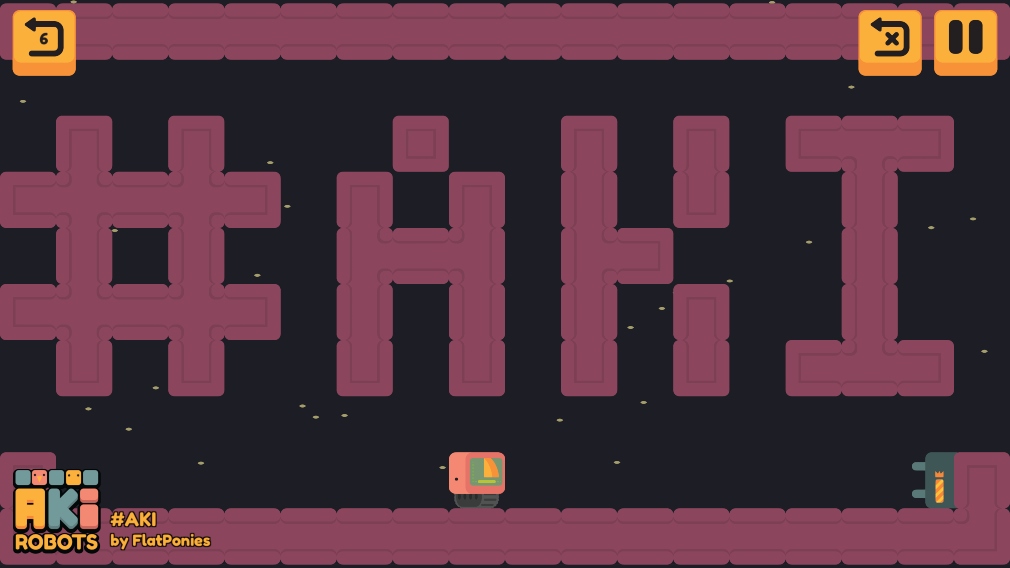 This is a fun puzzle/platformer with the simple goal of having you move your little characters around in order to reach a goal. The interesting angle to this game is that when you move one character, you move them all. Sounds simple, but it’ll keep you thinking. The graphics are nice, the controls, simple as they are, worked fine. I found the music (while entirely appropriate for the game) to be tedious and kind of annoying, so I turned it off.

The levels start out very simply to give you a bit of a tutorial and quickly get more challenging. But not so challenging as to tip into frustration. And you eventually get into more and more interesting puzzles. There is also a level editor that I have to admit I didn’t try out. But that’s always a good thing to see in a game, as it can easily prolong its lifespan. Puzzler and platformer fans should enjoy this. I did.

AkiRobots is best described as a 2D puzzle platformer and I instantly fell in love with the game as soon as I started playing. The game's colourful graphics and sounds have a SNES Super Mario World vibe which I absolutely adore. I’m a big fan of puzzle games that don’t punish you for your mistakes and I like that I’m able to instantly restart at my leisure.

The main feature of the game is that you control multiple robots at once and must use them to reach the goal. There are several levels within worlds for you to challenge yourself, but the ability to create, play, and share levels with other players gives #AkiRobots endless replayability. This is a simple and straightforward designed game that lets you jump right in and I appreciate that. One of the most fun apps I’ve played this year!

AkiRobots is considered a puzzle platformer, more puzzle than a platformer. The goal is simple, you need to get the main character plugged in. In some levels, you control multiple guys and they can move in opposite directions. Everything is done well. The controls are spot-on, and you can switch between swipe controls or a tradition virtual joystick. I’m about 30+ levels in and haven’t encountered any bugs. There is even a level editor but I haven’t played with that yet.

I have been having a lot of fun with this game so far. The levels can be tough, but not to the point of wanting to quit. The interface is easy to use and the graphics do what they are supposed to do. New mechanics are introduced as you continue and they bring some freshness to the new levels. This is an easy game to recommend to anyone who is a fan of this genre. Very well done.