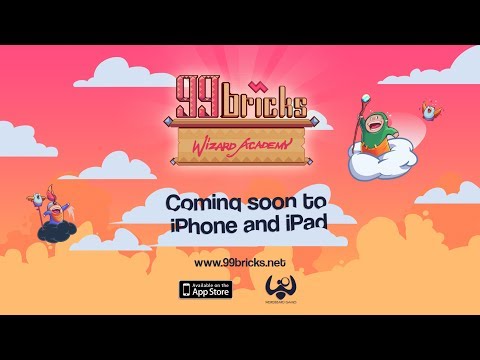 99 Bricks Wizard Academy is a physics-based tower builder that sees you trying to build the most magnificent wizarding tower out of tetrominoes. And it's coming out on iOS on June 3rd.

We had a hands-on fiddle with the game earlier in the year, but there have been changes since then. The biggest of which is that, after a soft launch, the game has shifted from a free-to-play to a premium model.

Joram Rafalowicz, creative director at dev Weirdbeard explained the reasons behind the shift.

"F2P didn’t fit our game design and rather than pushing F2P any further, we chose to go premium. This decision felt like the weight of 99 Bricks falling off of our shoulders."

"It was more about game design again: how to make the game as fun as possible, instead of looking at how to optimize for monetization."

We'll have another hands-on with the game in the not-too-distant future. In the meantime check the trailer at the top of the article to get a feel for what being a tower-building wizard is all about.